‘We now have the worst of both worlds—not just inflation on the one side or stagnation on the other, but both of them together. We have a sort of “stagflation” situation.” 2

So much for the “Roaring ‘20’s”. We now have a “stagflation” situation, whereby “inflation” and “stagnation” previously thought to be mutually exclusive are now concurrently prevalent. The global economy faces a series of worsening supply shocks – still widely underestimated and predicted to be “transitory” - for which financial markets are ill prepared and central banks impotent to resolve. Are the 40-year rates and 13-year growth-stock bull markets now over, usurped by a 1970s redux? 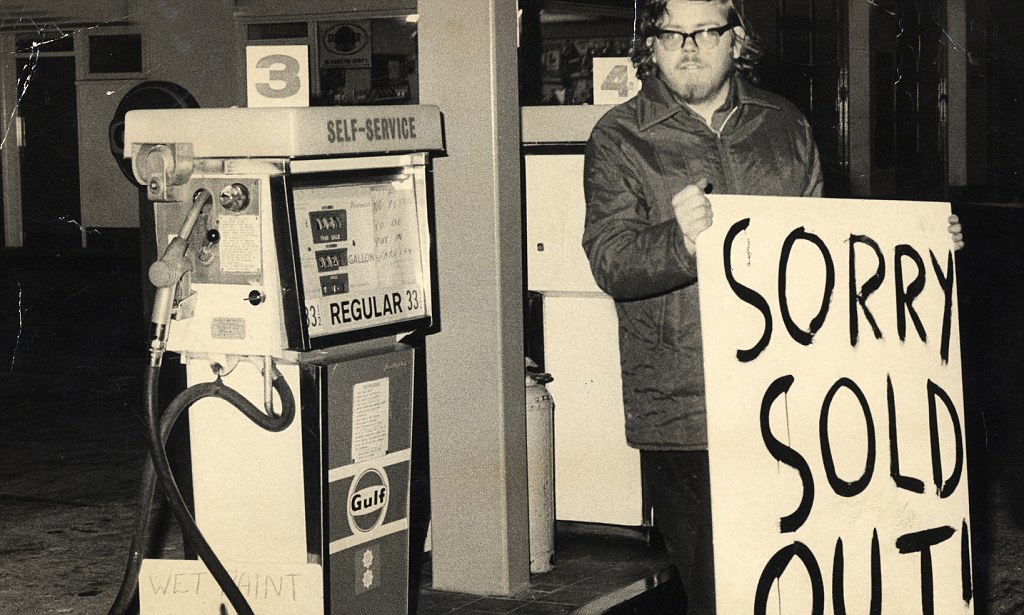 Much of the global economy is already in an energy supply crunch: since the summer spot European natural gas has risen +260%; spot German wholesale power +120%, both well above their 2008 peak when crude oil traded at $140/b (currently only $80/b) (Fig. 1: 2021 Energy Supply Crunch). Where will prices be when we turn on the winter heating?

Keeping the lights on

Dry pumps on UK garage forecourts – previously experienced in the OPEC crises of 1973 and 1979 - are somewhat misleading in terms of the nature to date of the energy crisis but symbolic of the change in consumer inflation expectations. It would be easy to attach a “reopening” narrative to the energy supply crunch but this is not quite supported by the facts. Whilst global oil demand fell by a record 9% (9m/b oil per day) during 2020 - with demand for jet fuel and kerosene plunging 40% (3.2m/b/d/e) and gasoline 13% (3.1m/b/d/e) - natural gas demand only fell by 2% and electricity demand by just 1%4. In other words, whilst there may have been a rebound in demand for transportation fuels, it is energy used in power generation – rather than transportation - witnessing the supply crunch.

Electric Vehicles run on electricity which is still largely (62% globally See Fig 2: Global Power Generation by Fuel) generated by fossil fuels: “Not a lot of people know that” as British actor Michael Caine might say, which is strange. Security of cheap and reliable power which also fits the political decarbonisation agenda is the heart of the energy crunch.

The UK has now largely phased out its coal fired plants, replacing production capacity with Wind (10-year installation capacity CAGR of 19%) and Solar (10-year CAGR of 86%) meaning that Renewables already account for 41% of UK power production (Fig 3: UK Power Generation by Fuel). The crux of the recent UK energy crisis is that wind and solar are notoriously unreliable (in September the UK wind capacity was operating at just 27% capacity6) and its energy cannot be easily stored. When weather conditions are unfavourable – and owing to lack of storage - the UK is forced to compete for additional spot gas supply at the same time as its peers in the international market, where Asian counterparts are more enthusiastic to commit to long-term supply contracts for Russian pipeline gas (or Qatari LNG).

China is key to the global energy crunch

The Chinese economy is still particularly energy intensive: as the world’s largest manufacturer China now consumes 29% of all global power generated (the US is now a poor second at 16% and the UK at 1% See Fig 4: Global Electricity Generation). China is currently rationing power during a seasonally low period of power demand to prevent electricity blackouts. During 2020, Chinese electricity generation still increased by 3.5% (7.3% CAGR over the last decade). China’s economic expansion needs to be fuelled by power.

Lacking indigenous oil and gas reserves, China’s energy security is still overly reliant on its coal - which meets 57% of its energy needs See Fig 5. China Energy Production by Fuel – which is largely why coal still fuels 35% of global energy needs9 (ex-China coal demand dropped 9% last year whilst Chinese grew by 1%) and why China is the world’s biggest emitter of CO2 emissions (31%). Although China is also the world’s leading Renewable energy producer (39% of all Wind and 36% of all Solar) such is China’s overall power consumption that Renewables still only account for only 5% of Chinese production

We should also understand China’s energy mix in terms of energy security: although China is the world’s largest importer of oil (20%) and second behind Europe in natural gas (14% vs. Europe 35%) , most of its other sources of power mix are indigenous (including over 93% of its coal where nevertheless it is still the world’s biggest importer (21%)).

Despite having a disadvantage in energy resources, China finds itself with a highly energy intensive economy, exporting that energy to the rest of the world. This makes no sense. Given this predicament, it is logical for the Chinese government to pivot its economy away from the export of highly energy intensive products, particularly when Western consumers may penalise China for those products being largely manufactured using energy from coal. Hence the recent curtailing of production or outright export bans in the Aluminium, Nitrogen Fertiliser and Steel industries, all of which are highly energy intensive (See Fig 7 Industry Energy Intensity (by gross value-add)12

This policy has huge, largely still unappreciated implications given that China currently constitutes just over 50% of global production in these three industries and has for the last two decades been the key global swing producer. This policy change will have a profound supply shock on the global economy.

Take fertiliser: the recent rise in nitrogen fertiliser prices (Urea +150% YTD and +50% in past two weeks14) See Fig 8: Nitrogen Fertiliser (Urea) is partially a consequence of high natural gas prices resulting in the mothballing of European production (10% traded global market) (which ironically has caused a supply shortage of CO2 in the UK and had knock on effects for the frozen foods and fizzy drinks industry). However, it is also the consequence of China deciding not to use its coal to produce urea via ammonia for nitrogen export (another 10% of the global traded market15), for which there is no short-term fix, given new greenfield capacity may take 2-3 years to build and would in any case be constrained by fund managers imposing ESG constraints on any corporates otherwise willing to invest.

A prolonged period of higher fertiliser prices will result in elevated food prices, itself a recipe for global political turbulence. Energy and food security are interwoven. What the global economy has become so used to out-source to China - but China no longer wants to export - now offers windfall profits to previously beleaguered Western producers. There will still be stock market winners if you are prepared to look under the rocks.

A month ago, we warned on the likelihood of a stagflationary slowdown this winter17. https://blog.argonautcapital.co.uk/articles/2021/09/01/winter-is-coming-it-now-makes-sense-to-hedge/ Recent economic downturns have all been demand led, where the safety valve for economic activity and financial markets has been more central bank monetary stimulus. But in a supply shock - such as those previously witnessed with OPEC in 1973 and 1979 - central banks are unable to come to the rescue. Central bankers are prone to recognising all supply led inflation as “transitory”, believing that it will soon be resolved by market forces. Even so, we should not expect there to be the political will – particularly given the “equality” and decarbonisation agendas they have now embraced - for central banks to induce such a painful slowdown through aggressive tightening (e.g. 1981-2 Volcker18) that it kills the supply constraints. Financial markets still largely either believe that inflation is “transitory” or central banks will induce another Volcker recession: they are ill prepared for the third scenario of the 1970s redux.

Quality stocks and government bonds may not be safe havens

In a demand led deflationary recession “high quality” equities and government bonds usually prove “defensive” for investors in terms of capital preservation. It is, however, a dangerous assumption to position in these assets in a supply-led downturn. https://blog.argonautcapital.co.uk/articles/2021/05/10/think-short-term/ 19 During the 1970s - noted “Adam Smith” in his investment classic “Paper Money” - the value of US stocks on the NYSE fell by 42% which compared unfavourably to the decade including the Wall St Crash 1929-39 when the value of stocks on the NYSE fell by only 31%. Whereas the 1929 Crash was a typical deflationary bust, the stock market crash of the 1970s was an “invisible crash…..masked by the age of paper money”; “their houses went up, and their jobs didn’t disappear”:

“If the first crash 1929 was a dramatic leap for a sixty-story building, the second [1970s] was like drowning in a bubble bath. The bubble-bath drowning sounds less scary, but you end up just as dead”

Gold (+32%), Oil (+32%), Farmland (+13%) and Housing (+10%) exceeded the CPI annual inflation rate (7.7%) over the decade whilst government bonds and previously high-flying growth stocks – the buy and hold “nifty-fifty” of the 1960s bull market thought to be impervious to downturns - performed disastrously. By the end of the 1970s “Business Week” cover story had proclaimed “The Death of Equities” with corporate profits killed by inability to pass on inflation. But as “Smith” recounts this was contested at the time by Professor James Lorie, University of Chicago, who claimed that business profits went from $41.8bn in 1969 to $85.8bn in 1979 – more than double, but not as much as inflation: “It wasn’t business profits that went down”, concluded A.S. “it was what investors were willing to pay for those profits”. In a supply led downturn, valuations matter.

There is now a strong possibility that the 13-year bull market in growth stocks – and the 40-year bull market in rates - is over. Central bankers – unable to fix supply side constraints and unwilling to kill the cycle – may now have lost control. Chinese autarky means globalisation is on the wane. Into the void steps greater government taxation, regulation and heightened geopolitical risk. Pricing power has now moved to those commodity companies previously thought to be at the bottom of the food chain who will now reap supernormal profits, precisely because for over a decade all the capital went elsewhere. The capital cycle has now come full circle: Davos man is dead, usurped by 1970s redux. See Fig 9: 1970s REDUX vs. 1981-2021 DAVOS MAN.

2 Iain Macleod, Conservative MP, House of Commons, 1965. At the time Macleod was an Opposition economic spokesman. He became Chancellor of the Exchequer in 1970 in the Heath Government but died within a month of taking office.

‘Drowning in a Bubble Bath’

‘Winter is Coming: it now makes sense to hedge’