‘Wildcat Money: just how bad is the crypto crisis?’

Like many financial scams Bitcoin purports to offer something complex and sophisticated. The initial concept set out by “Satoshi Nakamoto” in 2008 suggested a digital currency that would enable peer to peer financial transactions, cutting out financial intermediaries extracting exorbitant economic rents. Owing to its self-imposed ceiling on the amount of Bitcoin outstanding it would also act as a superior “store of value” to conventional fiat currencies.1 Neither of these claims stands scrutiny: the notion of scarcity value of cryptocurrency is derisory; the real world non-criminal use case is so far unproven.

At the heart of Bitcoin lies a deceit that decentralised private crypto fiat currency which anyone can issue is a superior “store of value” to centralised public fiat currency, backed by governments with tax raising powers with the ability to pay interest. Unlike gold or silver, to which it likes to compare, crypto is neither scarce nor difficult to produce; nor does it yet have utility, nor widespread acceptance. Although most have already failed, there are currently over 4,000 cryptocurrencies now in existence.

Owing to the proliferation of new digital currencies, Bitcoin continues to shrink as a proportion of cryptocurrency, now accounting for less than half its current market value (Fig 1. Crypto Market Cap). It is also a myth that Bitcoin is “immutable”2: it has been “forked” repeatedly into offspring crypto with different rules; ultimately absent sufficient remuneration in newly minted Bitcoin, the predominantly Chinese and Russian miners responsible for maintaining its transaction ledger and ensuring integrity of transaction could - and a cynic might predict probably will - eventually remove the 21 million future ceiling on Bitcoin supply3.

Crypto is in fact so easy to produce that almost anyone can have a go at “free money”: last week alone there were over 200 new “Initial Coin Offerings” (Fig 2. Initial Coin Offerings Last Week). Nearly all fail, mostly quickly as their sponsors run off with the cash raised, with retail investors vulnerable to the lure of stories of overnight fortunes.5 The crypto industry remains almost completely unregulated: there is almost a complete absence of Anti-Money Laundering (AML) and Know Your Customer (KYC) regulations; rules on capital raises of new cryptocurrencies are almost non-existent compared to conventional capital markets.6 This is Wildcat Money.

Financial Regulators generally do not believe that Bitcoin is yet big enough to represent a systemic financial risk. But if all cryptocurrency were a single stock today it would be the 5th biggest worldwide, in between Amazon and Alphabet (Fig 3. Crypto Market Cap vs. Biggest 5 Stocks). If crypto really is worthless then it would equate to a loss of more than double the assets involved in Lehman Brothers ($690bn) in 2008 and be a 25 times bigger bankruptcy than Enron ($65bn) in 2001. And this figure excludes financial leverage which is offered by most crypto exchanges and which is almost entirely unregulated. Crypto regulation is increasing but will it be too little too late?

There have been previous experiments with decentralised money. During the US Free Banking Era 1837-1963, commercial banks (even railroads and drug companies) could issue their own currencies which traded at different values backed by their own gold and silver reserves. Bank runs and financial instability were frequent: over half of all banks failed with an average lifespan of 5 years. Around one third of notes in issue were thought to be counterfeit.9 New banks would often issue new notes for deposits buy assets then skip town and default on their liabilities. Medieval Germany (1618-48) and early 20th Century Mexico (1910-21) had similar experiences, resolved with the establishment of a centralised banking authority, which in the US culminated in the foundation of the Federal Reserve in 1913.10 The history lesson is that Wildcat Money comes with high economic cost: the incentives to cheat are so high whether conventional or digital.

Just as conventional currency was eventually centralised11 so the same process is now underway with its crypto equivalent with public central banks notably in Sweden, China and now the US attempting to centralise block chain technology through the introduction of their own digital currencies.12 The unmet need enabling peer to peer digital transactions is however by no means clear.13 Most financial transactions are enabled rather than stifled by a trusted intermediary. Cryptocurrencies and in particular Bitcoin has shown itself to be much slower, less scalable, more costly, with more insecure property rights than conventional currencies.14 The volatility of cryptocurrency makes it impossible to price items or be used as a unit of account (with even Bitcoin conferences refusing to accept payment in crypto).15 Blockchain anonymity is useful for hiding wealth, money laundering and in enabling financial extortion such as the recent ransomware attack on the Colonial Pipeline (the 75 Bitcoin ransom was paid in full).16 So far the main enhancement to civilisation from blockchain technology has been to enable transactions in gaming tokens and digital art.17 The environmental concerns whereby Bitcoin miners consume the same annual energy as a small European country is now well-documented.18 If to date the only Blockchain killer app invented has been the enabling of financial extortion, then it is questionable why any reputable financial institution – not overwhelmed by fashionable feeblemindedness - should want to endorse Bitcoin and certainly not crypto as an “investment asset class”. 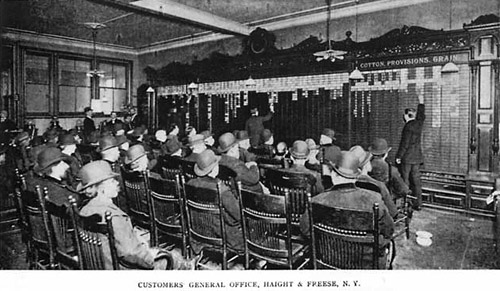 In view of its stated aims, the great irony of Bitcoin today is that 99% of all transactions are entirely speculative, taking place on one of the numerous crypto exchanges where intermediaries charge an extortionate economic rent.19 Surely this makes “Satoshi Nakamoto” blush? In addition to the typical 0.5% commission rate, there are additional flat fee charges per transaction, custody fees and lucrative finance charges for leverage, which when combined with volatility and stop losses ensures that the house almost always wins. Security of custody is not ensured: hence the recent unfortunate incident whereby the CEO of a Turkish crypto exchange is alleged to have stolen $2bn of customers assets.20 With an average fee per transaction of 3-4%,21 the crypto exchange is the modern-day Bucket Shop (See Fig 4. The Bucket Shop): its activities are curiously unregulated; earning unsustainably high commissions off peak trading activity on an asset class which arguably has no fundamental value. Curiously, the market value of the only publicly traded crypto exchange, Coinbase, is currently double that of the NASDAQ exchange (See Fig 5. Trading Exchanges by Market Cap) despite accounting for just 12% of crypto exchange trading worldwide, giving some idea to of the degree to which this industry is not only over-valued but over-earning relative to more traditional asset classes.

Crypto enthusiasts rarely attempt to quantify their zeal with any quantitative discipline, but in a recent Bloomberg interview ARK Fund manager Cathie Wood reiterated her $500,000 Bitcoin price target.23 Wood’s price target rests on the premise that Bitcoin should eventually have a similar market value as gold, although in contrast to gold, crypto has exceptionally high volatility but also high correlation to risk assets, which means it has dubious investment diversification benefits, even if it had any positive fundamental value.24 To put Wood’s price target into context, $500,000 per Bitcoin would equate to roughly half of the size of the US economy, 15% of the global stock market, 15% of the global government bond market and a quarter of the global corporate bond market. We might also note that Wood’s current $3,000 price target for Tesla would equate to a value the same size as the entire UK economy. (See Fig 6. Cathie’s Price Targets for Bitcoin and Tesla in Context).

Fig 6. Cathie’s Price Targets for Bitcoin and Tesla in Context

Once converted to the crypto religion Bitcoin zealots seem to lose capacity for critical reasoning, treating non-believers with a heretical contempt, such is the nature of any pyramid selling scheme where new converts can only extract their own economic rent through further proselytization. Crypto’s $1.5trillion current market valuation already constitutes the most successful Ponzi scheme of all time: this should be the biggest concern of any financial regulator worldwide. 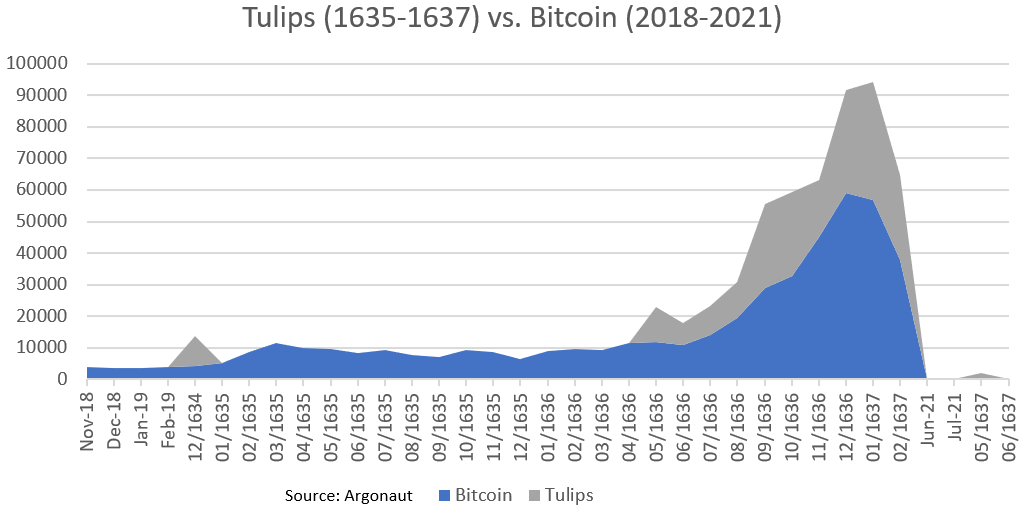 The investment craze in bitcoin (2018-21) has often been compared to previous speculative bubbles such as the Dutch Tulipmania (1635-37), itself coincidental to a pandemic and lasting only a matter of months (See Fig 7. Tulipmania vs. Bitcoinmania) According to Nout Wellink, former President of Dutch Central Bank, “This is worse than the tulip mania. At least you got a tulip, now you get nothing”.25 Whilst the crypto bubble may have already burst, the systematic consequences of unregulated Wildcat Money are yet to be seen.

11 Today, only in Scotland, Northern Ireland and Hong Kong are commercial banks able to print their own bank notes and the process is strictly regulated

‘Has the Fed just killed the cycle?’