“A cigar butt found on the street that has only one puff left in it may not offer much of a smoke, but the “bargain purchase” will make that puff all profit”

“Time is the friend of the wonderful business, the enemy of the mediocre”

Equity investors talk less about time horizons than their fixed income counterparts but when they do it is almost always to encourage a “long-term perspective”. The process of economic evolution will eventually and incontrovertibly ensure that the “wonderful business” will triumph over the “mediocre”. Since the quality of a company is invariably already reflected in a higher stock market valuation this would also imply that valuations are relatively unimportant over the long-term.

Whisper it quietly but by the same logic if investor time horizons shorten it must also herald an investment regime where current valuations matter again, stock multiples converge toward the mean and consequently the “mediocre” thrive at the expense of the “wonderful”. It is now widely acknowledged not least by Buffett that “there’s more inflation going on, quite a bit more”. Since this erodes the purchasing power of capital, it incentivises consumption now over investing for the future. At the risk of contradicting all fund management marketing literature, can we suggest that now might be a profitable time to think short-term?

Buffett has long since disavowed his original investment strategy of “Cigar Butt” investing whereby the “bargain purchase” more than compensated for the mediocrity of the business, citing scalability issues, but perhaps there is an alternative explanation: the strategy was originally employed in an elevated inflationary era which was not conducive to long-term equity duration; under the new macro regime of sound money and smaller government which has prevailed since the 1980s Berkshire Hathaway evolved to instead look for high quality businesses with durable competitive advantages. Buffett rebranded his mantra to “buy a good business cheap”. By 1989, “cigar butts” were just an embarrassing relic. Fast forward to 2021, with “more inflation going on” and perhaps “cigar butts” may be worth another look? 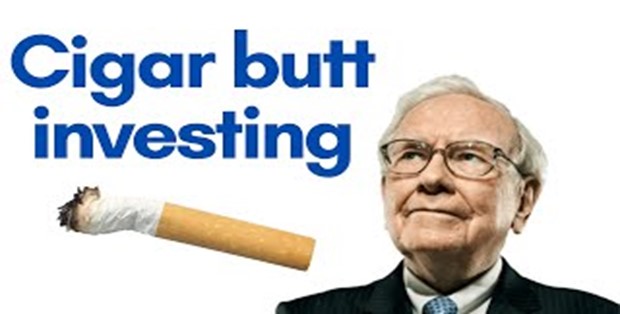 In a deflationary economic expansion - such as that we have witnessed since the Great Financial Crisis - investors and companies can afford to think long-term: to invest for productivity gains - now termed “disruptive technology” - confident that their future returns will not be eroded by inflation. By contrast in an inflationary boom time-horizons must shorten as the time value of money becomes more penal. Worse, in a higher nominal growth economy those “mediocre” companies - for whom “time” is the “enemy” – suddenly find themselves with pricing power often able to best the profit growth of the previously “wonderful business”. Inflation is therefore the friend of the “mediocre” business but crucially also the “enemy” of the “wonderful”.

Since the Great Financial Crisis, the economic consensus has contrasted an austere fiscal policy with unprecedented monetary stimulus: zero interest rates and unsterilised central bank asset purchases. This has resulted in yield compression on all assets but crucially not in the equity market where despite their relative stupendous generosity equity dividend yields have often been seen as irrelevant (see Fig 1. European Yield Compression). In fact, generous dividend income from stocks has often been accompanied by capital loss. By contrast, meagre or even negative carry from fixed income assets has somewhat illogically often led to capital gain. 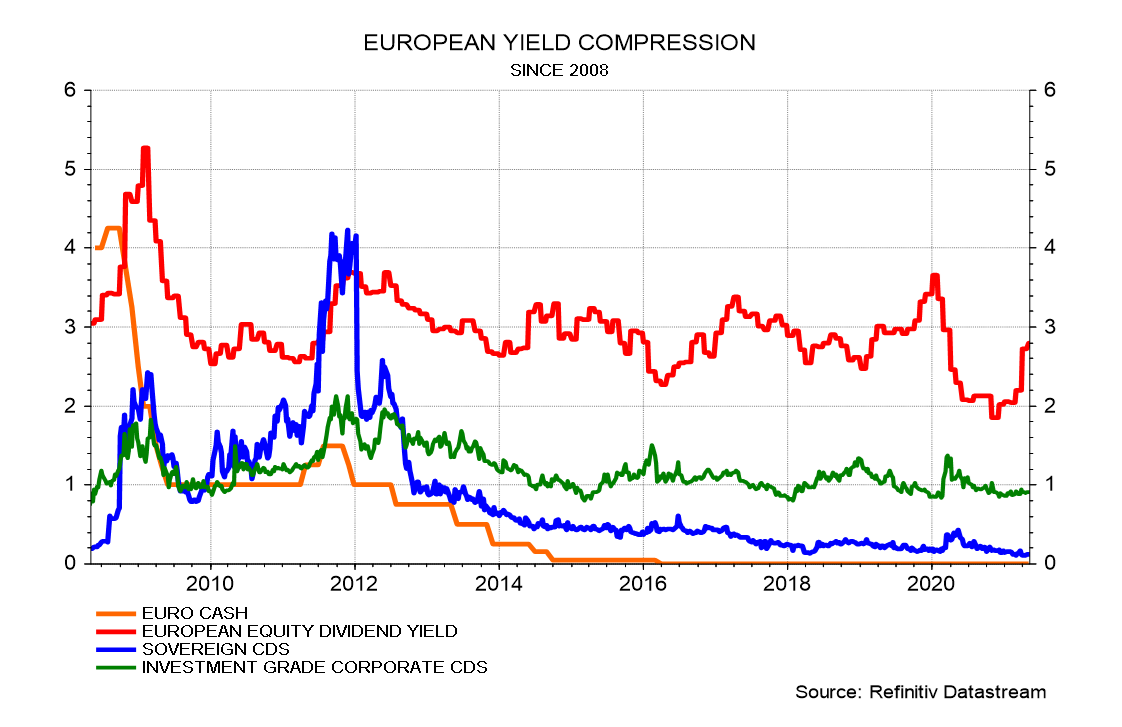 This curious underperformance of equity dividend strategies during a period of zero interest rates has attracted little comment or debate but can best be explained by the macro regime of “deflationary boom”, whereby low inflation incentivises investment and longer-term capital allocation. By contrast, inflation impacts the psychology of the investor who then asks for a quicker return on their capital. In an inflationary macro regime those companies which return capital to their shareholders rather than invest for the future are rewarded: as the purest expression of a low duration equity portfolio, a true equity dividend strategy will hedge the dangers posed by inflation.

But Fed Chairman Powell told us that current inflationary pressures would prove “transitory”? Whilst there is still considerable pent-up demand in Europe and the Southern Hemisphere which are still in lock down, US economic growth will surely slow down with the re-opening largely behind us and stimulus cheques cashed? And industrial supply chain inventories will eventually be rebuilt? And didn’t the birth rate slow down as well during lockdown so the population will continue to age? Besides, it always pays to fade peaking economic growth and rotate out of value stocks and commodities and back to growth stocks and bonds. Why should this time be any different?

First, the reflationary cycle is typically killed by the Fed. Chairman Powell has vowed never to repeat its previous mistake of withdrawing stimulus too quickly.4 Indeed, taking their words at face value the Fed will now tolerate inflation running above the target 2% so that 2% is the “medium term” average.5 The Fed actively encouraging higher than target inflation is different.

Second, there is currently no appetite for fiscal austerity. Despite proposing tax hikes for the “rich” President Biden is projected to run double digit fiscal deficits for the entirety of his term. The UK currently runs a similarly sized deficit with its economy having shrunk 10% smaller during lockdown and its government debt 10% of GDP higher. With no appetite for tax rises or spending cuts, inflation must pay for the UK’s £400bn (20% GDP) bill for COVID. The end of austerity and this tolerance of double-digit fiscal deficits is different.

Third, fiscal stimulus works differently to monetary. Monetary stimulus disproportionately benefitted those who already had capital and therefore resulted in an investment boom which was not widely inflationary owing to a lack of mass participation. Fiscal stimulus is intended to benefit those who need money more and are therefore more likely to immediately spend. Hence the velocity of money increases in an inflationary consumption boom.

Economic growth based on inflationary consumption boom is very different to the previously witnessed deflationary investment boom. Increased taxation on investment capital gains exacerbates the trend. Stimulus cheques may discourage employment and exacerbate wage increases. Bigger government may start off with good intentions but ultimately allocates capital less efficiently than millions of consumers and investors and potentially disincentivises employment and capital formation. The consensus around sound money and small government is now dead. This is inherently inflationary and different.

Fourth, the supply side economic response may take much longer than commonly thought. Although industrial production is booming there is currently little evidence that inventories are being rebuilt: buyers are purposely running low inventories in response to current above average prices which they hope may prove “transient”. Such behaviour inevitably prolongs the cyclical upswing.  Not all incremental demand may necessarily be cyclical: electric cars are more metal intensive and require more semiconductor content; logistical bottlenecks require more ships to be built; de-carbonisation shifts the energy cost curve upwards; US housing starts are lower now than previous decade peaks in the 1979s, 1980s (See Fig. 2 US Housing Starts) despite nearly twice the population which in any case wants to live in different parts of the country to the current housing stock.  The supply side response in commodities is also inhibited by a decade of being starved of capital and new environmental considerations particularly now key swing producer China is curtailing production in energy intensive industries such as steel and aluminium. What is different is that industrial supply chains will not be able to easily adjust to meet demand. 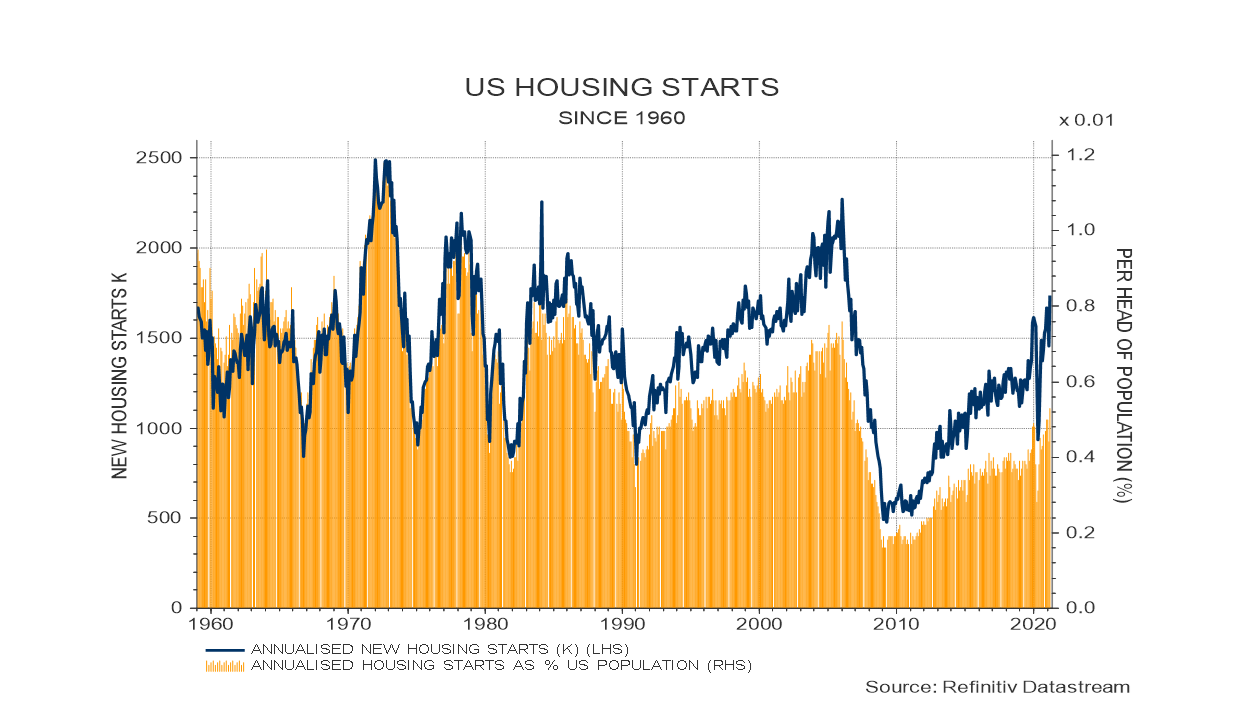 Finally, the current capital cycle is now long in the tooth. There has been too much capital raised by “disruptive business models” chasing the same profitless sales. Investors are beginning to realise  that under a new inflationary macro regime the market will have less patience for this kind of business model and certainly will not pay the same price to sales multiples. Ironically, this bubble is bursting not because of a Fed rate hike but precisely because the Fed is standing pat, letting inflationary expectations build. This is different.

These differences do not necessarily entail an equity bear market rather a change in market leadership from highly valued secular growth to lowly valued cyclical growth. Many recently successful equity investors have become “one trick ponies” returning repeatedly to the same well of disruptive profitless technology where valuation never matters. If only it was always so simple: today’s investment geniuses are often tomorrow’s fall guys. In any multi-year inflationary macro regime, previously high-flying profitless tech will be a treasure trove of short opportunities.

Stock-market leadership has recently gravitated to industrial cyclicals: but we see the potential for multi-year “wonderful” booms in mining, steel, housebuilding, transportation, and semiconductors but still “mediocre” stock valuations as the market worries that we are currently already at peak cycle. Shareholder value can be created in old industries as well as new ones through strict capital allocation of windfall profits. This was recently articulated by Lourenco Goncalves, Chairman, President and CEO of leading US integrated steel company, Cleveland Cliffs, clearly frustrated with the stock-market’s modest appraisal of his share price:

“Every single dollar that we pay down on the debt for the same enterprise value goes to the other side, goes to the equity and the stock price and we will start to appreciate. We are in a moment to here in United States in which the economy is booming. The consumer is consuming… we are selling everything we want and the stock price should continue to appreciate. It's time for real investors to start to move money to where companies are making money….Investors need to take notice because we are making money…..And we are starting to trade at the multiples that are absolutely absurd, absolutely ridiculous and this thing is not going to stay there forever. What we'll continue to do, we'll continue to move numbers from the debt side to the equity side…. My focus is 100%, 100% on paying down debt and eliminating debt and creating equity. And then the numbers have no other place to go except the stock price.”6

There are no certainties in predicting the future and picking sustainable macro inflection points is particularly fraught with danger. However, there now seems a high probability of a multi-year macro regime change whereby economic growth will now be highly inflationary, benefitting the “mediocre” over the “wonderful”. If we are correct then it is time to ignore everything the fund management industry has told you about time horizons: it may just be time to think short-term.

‘Wildcat Money: just how bad is the crypto crisis?’