In 1918, the Ford Model T, accounted for over half of all cars sold. Through efficient assembly line production Ford disrupted the automobile industry by drastically reducing manufacturing costs to achieve a market share not previously seen and still to be surpassed. It took until 1972 for the VW Beetle to reach the Model T’s 1925 previous record of 2m vehicles sold in a calendar year.

Until recently the automobile industry has been priced for Tesla to achieve a similar dominance in future electric vehicle sales, even though its share of 2020 auto sales was tiny at just 500,000 units. At the beginning of 2021 Tesla had a stock market value of TEN times that of the world’s current leading producer, the Volkswagen Group, which during 2020 sold TWENTY times more cars, had SEVEN times more sales and was FIVE times more profitable.

Volkswagen has also been planning for the electric vehicle revolution. At its recent “Power Day” it announced the roll-out of a single VW Group technology platform from 2023 which would halve the cost of its automobile battery (to below that of Tesla), with 80% of all production electric by 2030. This would not only make VW the leading global manufacturer of electric vehicles but would also mean that its electronic vehicle profitability would be comparable to (and in the long term exceed) that of its traditional internal combustion engine vehicles.

There are generally three key barriers to electronic vehicle adoption: cost of the vehicle, range of journey and ease of recharge. VW pledged to invest €35bn over five years to drastically improve all three. With governments keen to promote electric vehicles as part of their post COVID economic stimulus, it is likely that electronic vehicle adoption now occurs quicker than even the most bullish analyst forecasts.

VW also pointed to the size advantage which comes from producing 10 million vehicles a year (15% of global sales). Tesla has enjoyed a first mover manufacturing advantage and still has a significant lead in software development for future autonomous driving, but VW’s announced electric vehicle investment over the next five years is double that of its Californian rival. Economies of scale mean this works out at just $4,000 per VW vehicle compared to $26,000 at Tesla. Perhaps being the incumbent was not so bad after all?

The sleeping German giant awoke from its stock market slumber. Previously the electronic vehicle revolution was seen only as a threat to VW’s existing unit sales and profitability; now it was clear that its own efforts had been seriously underestimated. VW shares – previously regarded as a value trap – have subsequently been on a tear, now up over 50% year to date, but still trade on a modest single digit price/earnings ratio. 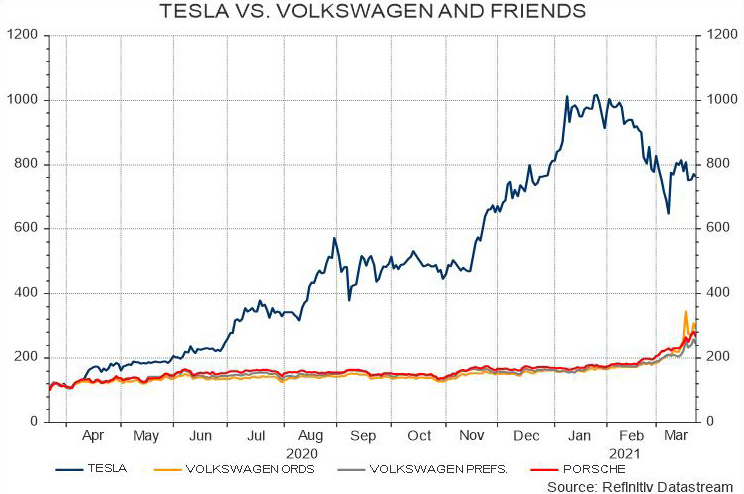 Although the Volkswagen Group is best known for its eponymous mass market brand and is also the world’s leading Truck manufacturer, most of the profit and value in the group is generated from the upmarket Porsche and Audi brands. It also owns Lamborghini, Bentley, and the Ducati motorcycle brand.  Considering the success of the separate Ferrari listing since 2016 for the Fiat Group (with the Maranello based outfit currently enjoying a €32bn market value) investors have been frustrated at the apparent value destruction from these gems being hidden within the VW conglomerate structure.

Although it sits on a robust €26bn net cash pile and generates a healthy €10bn of free cash flow, VW may now look to accelerate funding for its electric vehicle strategy – particularly as it has been so well received – through monetising a minority stake in Porsche. Even if this priced at a conservative 60% valuation discount to Ferrari, this would highlight at least €80bn of Porsche equity value within the current €150bn Group equity capitalisation. Any sum-of-the-parts analysis also underlines the absurdly low relative valuation currently implied on VW’s electronic vehicle business compared to mostly inferior pure play peers. An IPO of Porsche would see the VW Empire strike back.

To confuse matters the Porsche family investment vehicle, which controls the VW voting shares is currently listed with half of its own shares owned by third party investors. With its market value currently €29bn but its investment in VW common shares worth €52bn, Porsche is the cheapest way to invest in Volkswagen given its anomalous discount to Net Asset Value. 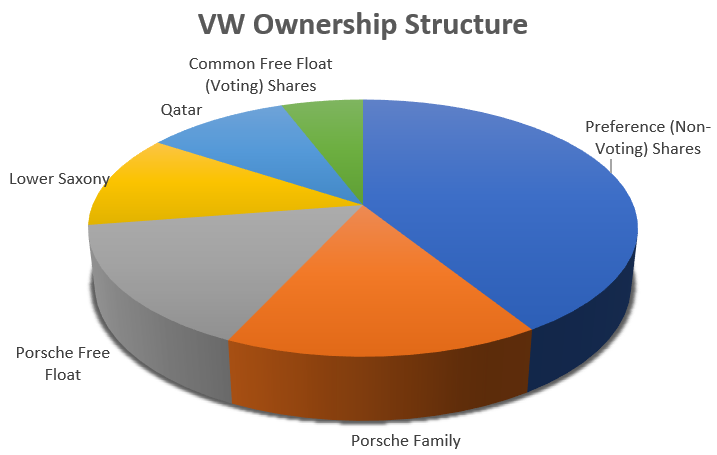 Celebrity Fund Manager Cathie Wood has just announced her new Tesla price target of $3,000 by 2025. This would be more than a four-fold increase on its current share price, which has already increased seven-fold over the last 12 months: it would equate to a market value of almost $3 trillion (13% of US GDP). Such a valuation would seem a flight of fancy unless Tesla were to achieve Model T type dominance and is able to licence its autonomous driving software to other manufacturers (which would then likely consign those car makers to their doom).

By contrast Volkswagen at €1,000 – at which it would still be worth considerably less than Tesla today – or Porsche at €400 would seem a far more reasonable “four-bagger” prospect.