“Within our mandate, the ECB is ready to do whatever it takes to preserve the Euro. And believe me, it will be enough” Mario Draghi, ECB President, July 20121

“I used to think that if there was a reincarnation, I wanted to come back as the President or the Pope or as a .400 baseball hitter. But now I would like to come back as the bond market. You can intimidate everyone” James Carville, Clinton political adviser, 19932

There is increasing scepticism in the bond market that the Federal Reserve will be able to suppress medium to longer-term market interest rates. If investors cannot be persuaded that the likely record robust growth we are about to witness is “transitory” then Chairman Powell will at some point face a choice: lose credibility through tapering asset purchases and raising short rates earlier than previously guided (potentially killing the recovery); or increasing (or threatening to increase) asset purchases of Treasuries to re-establish control over the yield curve. Just as bond markets tested the resolve of the ECB in the sovereign crisis, could Chairman Powell be forced into a “whatever it takes” showdown with the bond markets? We examine the investment implications for the equity market.

The US Senate has just approved the further COVID $1.9 trillion 2021 fiscal stimulus in addition to the $900bn already enacted (a combined 13% of 2020 GDP). Just under half of the original $2.4 tr 2020 stimulus has yet to be spent, whilst during lockdown US household savings are estimated to have risen by an incremental $1.5tr. Hence the fiscal tailwind to 2021 economic growth could be as much as 24% of GDP (Fig 1. US 2021 Fiscal Tailwinds3). With COVID restrictions gradually being reduced, US economic growth during 2021 is unlikely to disappoint even the most elevated estimates of c. 6-7%. 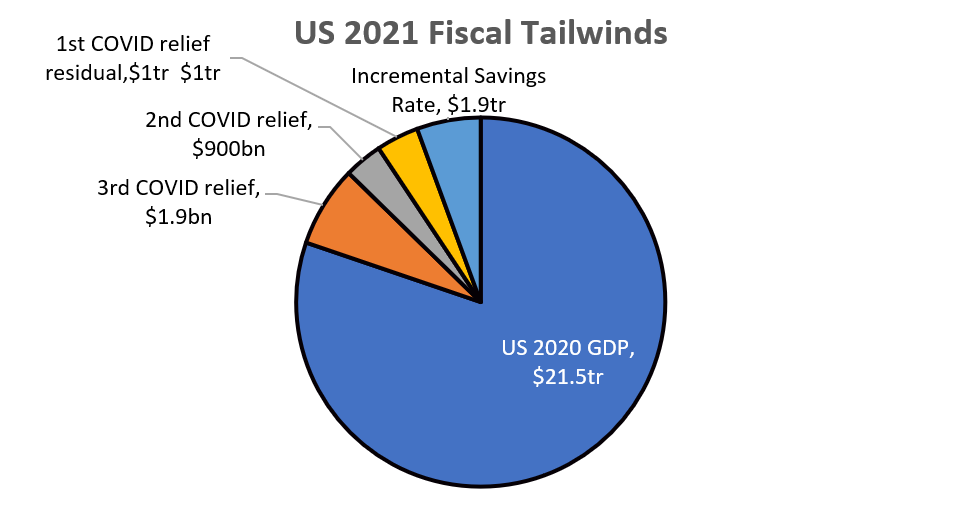 Last year’s stock-market recovery was often seen as illogical given the widespread economic pain. This year will undoubtedly be much better for Main Street but not necessarily for Wall Street (and growth orientated US equities). We are currently witnessing how the bull market in long duration assets has been more dependent on cheap money than innovation or genius. The symptoms of excessive recent speculation have been plain to see (SPACs, bitcoin, new retail participation, volume of IPOs) which seasoned cyclical observers might well evidence as typically “end of cycle” or at least behaviour commonplace at the significant inflection points in markets. Rising yields deflating investment manias is no bad thing for the long-term health of financial markets. The Fed knows this.

The global economy is currently experiencing a powerful industrial re-stock: from steel to semiconductors there are low inventories, order books that cannot be fulfilled any time soon and strong pricing power for companies who have often had none. Stocks that previously struggled to generate growth in an anaemic environment now suddenly offer positive earnings surprise. The prime justification for premium valuations for growth stocks is therefore currently invalidated (and inevitably results in less appetite to allocate capital to speculative disruptive business models).

We are no longer investing in a zero-interest rate regime. The perception of risk in the equity market from an absence of economic growth and profits has shifted to concerns now over the longer-term path of interest rates and inflation. There are still many who remain sceptical that the Fed has genuinely rekindled inflation and others who do not believe they will tolerate the likely high headline rate coming this year. Nevertheless, the market has already entered the stage where bond investors are beginning to panic about longer-term market interest rates.

When the Fed dismiss concerns about inflation as “transitory” they have a fair point. The reflationary cycle is likely to decelerate toward the end of 2021 once inventories have been restocked. This would likely ease some pressure on yields and growth stocks. But the COVID crisis has also coincided with a political sea-change which the market may be underestimating. With double digit spending deficits commonplace (Fig 2. Fiscal Deficits 2020/21 as % GDP) as governments lent their balance sheets to mitigate the economic stress of lockdowns, we must also consider who will end up paying? 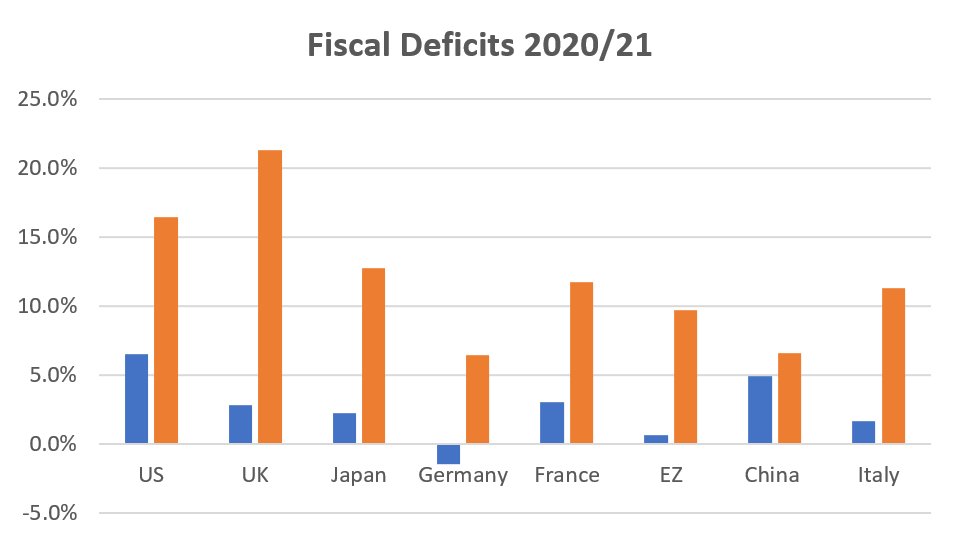 Since there is no longer any appetite for austerity, the only tolerable political solution to reducing the public debt burden is higher nominal rates of growth. Since any dramatic acceleration in trend real economic growth seems unlikely, this can only be done through higher prices. This will require interest rates to be held down below the level of nominal economic growth indefinitely. Inflation will “pick the pocket” of investors (and consumers) to balance the budget.

The steepening yield curve4 which has roiled financial markets recently is ironically exactly what central banks have been attempting to engineer for the last decade. It is a recognition by markets that future nominal growth will continue to accelerate. The alternative is a Japanese style debt deflation trap. As such Chairman Powell is likely to be privately very relaxed about rising duration risk (even if this has negative consequences for some asset prices) and dismissive about the possibility of an earlier taper of asset purchases or the bringing forward of rate hikes, particularly as he has admitted that the Fed was premature5 in killing off previous reflationary cycles.

At what point might the yield curve get too steep for the Fed? At this stage any concerns are likely to be focused on the negative consequences from volatility of the re-pricing rather than actual levels of yields: after all the current 10-year Treasury yield of 1.55% (up from 0.5% in July 2020) is still well below the pre-COVID level of 1.9%; the generic 30-year mortgage has just ticked over 3% (up from 2.65% in Jan), but was 3.7% at the beginning of 2020; high yield credit spreads have hardly moved and should benefit from record nominal economic growth6. We should therefore expect the current stand-off between the Fed and the bond market to worsen before any change in policy: there will be no “Fed Put” for the holders of long duration assets. As Powell plays for time, the consequences of rising rates will likely continue to weigh on valuations, offset in more cyclical parts of the market by robust earnings growth.

What are Chairman Powell’s policy options if Treasury yields rise to a level where they threaten to choke the economic recovery? This really depends on which part of the Treasury curve is inconsistent with the Fed’s desired path of interest rates (as formally expressed through the “dot plot”). The Fed could look to target specific assets incrementally as part of its current $80bn a month asset purchase programme. Alternatively, it could move to implement Yield Curve Control “YCC”, threatening unlimited purchases of specific duration Treasuries above a certain target yield. Fed Governor Leal Brainard has previously hinted at this in speech on July 14th, 2020: “Given the downside risks to the outlook, there may come a time when it is helpful to reinforce the credibility of forward guidance and lessen the burden on the balance sheet with the addition of targets on the short to medium end of the yield curve.”7 In view of the potentially unlimited commitment (in both quantity and time) of Yield Curve Control to further expand the size of the Fed balance sheet (already $7.6tr of 35% of GDP see Fig 3. Federal Reserve Balance Sheet QE1-4), this would constitute Powell’s “whatever it takes” moment. 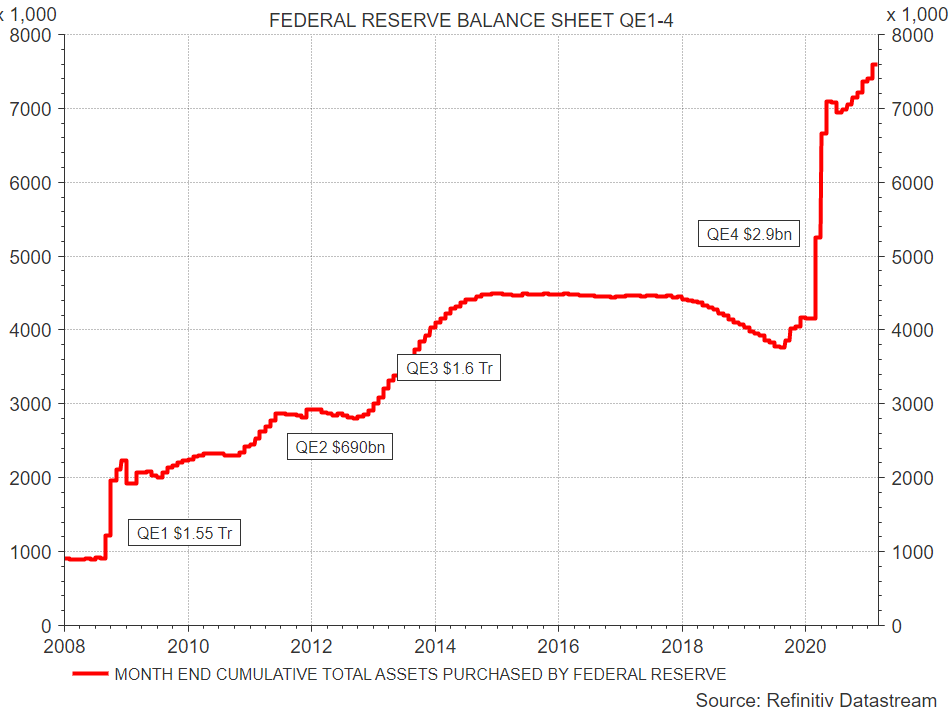 There are different flavours of Yield Curve Control.8 But if implemented it is most likely to result in the Fed regaining control over the shape of the yield curve but probably not riskier longer-term maturities. It would also bring negative implications for the purchasing power of the greenback: if dollar interest rates were capped, concerns about inflation would be expressed through the depreciation of the US dollar instead, thus making cheap dollars available for global reflation. Therefore Powell’s “whatever it takes” intervention might subsequently be viewed as a pyric victory for bond vigilantes.

Chairman Powell is most likely to play for time in his potential showdown with the bond market, with yields likely to climb further given reaccelerating record US economic growth. The best hope for bond and growth investors is that inflation proves “transitory” and economic growth decelerates once the current industrial restocking cycle has peaked later this year, which could offer a tactical rotation opportunity back into long duration assets. Nevertheless, it would be a mistake for investors to look to the Fed this time to suppress reflationary impulses.

Although volatility is likely to remain elevated, commodity, cyclical and financial stocks (particularly those which can benefit from the steep yield curve) should continue their rebound, buoyed by a powerful earnings upgrade cycle, with the risk that the Fed kills the cycle in 2021 remote. Long duration growth equities should continue to deflate on steepening yield curves and supply of new equity into “glamour” stocks. Portfolios which have previously produced attractive returns through being long low volatility, long duration assets and short high volatility cyclical assets are most at risk from the current reflation.

Bond Vigilantes should be careful what they wish for: a “whatever it takes” intervention in the form of Yield Curve Control may bring short-term relief for rates but would likely accelerate and extend the global reflation cycle.

A reincarnated James Carville might instead now come back not as a bond trader but as the Chairman of the Federal Reserve.

4 “Steepening” is of course a simplification: rate expectations have in fact increased most specifically in medium than longer term maturities. “Lift off” has essentially been brought forward to 2023 from 2024

8 Since 2016 Bank of Japan has been implementing YCC on 10-year JGB’s https://libertystreeteconomics.newyorkfed.org/2020/06/japans-experience-with-yield-curve-control.html. Last year, the Reserve Bank of Australia targeted 3-year duration https://www.rba.gov.au/statistics/ags-target/. Brainard’s comments suggest that the Fed would target the “short to medium end of the curve”, hence would be more likely to follow the Australian model. This would be less risky in terms of commitment (duration 3 years) and would effectively commit the Fed to its prevailing dot-plot over the period in question. It would also keep the yield curve steep offering attractive “carry trades” to investors in 4-5 years duration, hence having an impact beyond the specific 3 years in question.
The Fed previously implemented YCC during the 1940s to finance WW” with mixed success with the policy being abandoned as inflation reached double digit percentages.
https://libertystreeteconomics.newyorkfed.org/2020/04/how-the-fed-managed-the-treasury-yield-curve-in-the-1940s.html
https://www.newyorkfed.org/research/staff_reports/sr913.html