“Now, Criticks, do your worst, that here are met; For, like a Rook, I have hedg’d in my Bet”
The Rehearsal, George Villiers, 2nd Duke of Buckingham, 16721

“The propensity to swindle grows parallel with the propensity to speculate during a boom the implosion of an asset price bubble always leads to the discovery of frauds and swindles”
Manias, Panics and Crashes, Charles P. Kindleberger, 19782

“Hedging” has always brought economic progress with controversy. To “hedge” land through enclosure reduced the risk to livestock and secured property rights, a crucial development in the British Agricultural Revolution, but which ultimately also resulted in the loss of common land.3 When the modern phrase “hedging our bets” was originally used in Restoration England comedy The Rehearsal, the “hedging” concept was already being applied to reducing or mitigating general financial risk through offsetting contrary positions.4

The “hedge” is at least as controversial today. We are told that the primary motivation behind the Gamestop speculation is the destruction of “short sellers” betting on the fall of “vulnerable” companies. Whereas most investment manias are founded on an alluring positive narrative,  “Gamestop” had none: there has been no attempt to polish the company’s growth prospects; it was always self-consciously empty speculation, destined to fail in financial gain, but with a wider nihilistic purpose.

The anger from the bailout of the banking system during the Great Financial Crisis is still palpable. There is also a growing political awareness as to how Central Bank Quantitative Easing has boosted assets prices, benefitting financial market investors, whom are disproportionately already capital rich. It is curious then that “short sellers” - whom have never been “bailed out” and whose returns have been negatively impacted by asset inflation - should be the specific target of the rage.

Short selling stocks in a bull market is not an easy living. Although widely seen as malicious, in fact it only succeeds if an unpalatable truth is discovered. Without shorts it is unlikely that multi-billion-dollar frauds such as Wirecard5 and NMC Healthcare would have ever been uncovered6. It is also notable how entrepreneurs and executives who themselves have been subject to the scrutiny of shorts have often been the most vocal (and irresponsible) Gamestop cheerleaders. How Marcus Braun must now be cursing his unlucky timing.

A stock-market where only bullish narratives are tolerated with market participants solely motivated by higher prices will inevitably be more dishonest. Publicly traded companies which are engaged in fraudulent practices or even intentionally grossly exaggerate their growth prospects should not be subject to sympathy. In the absence of shorts, motivated to hold companies to account, capital would be allocated less efficiently and over the long-term economic growth would suffer.  Investment manias – if left unchallenged – will inevitably lead to a more problematic asset bubble further down the line.

It is also important to point out that companies go bust not when their share price falls but when they run out of cash. If a company needs to raise new funds for investment however, then a higher share price makes this easier. The invisible hand7 of the stock market should make capital raising easier for companies with better growth prospects and more difficult for the rest. Is this unfair to society or damaging to the economy? This discrimination is surely necessary for an efficient market: do we really need more sparsely populated Gamestop stores?

If it is now considered morally wrong for shorts (but not company management) to sell shares in failing business models where growth prospects have been exaggerated, then it logically follows that capital should be equally and abundantly available to all companies, irrespective of merit. If implemented this would not only be inflationary – since more capital would have to be created – but we would end up with an economy with a productivity rate akin to the old Soviet Union8, since companies with innovative new products would receive the same resources as those which sold goods and services for which there was no demand.

The Gamestop speculative frenzy and similar targeting of crowded shorts has seen a record short-term outperformance of hard to borrow heavily shorted stocks.9 This has disrupted the equity market structure: as short positions taken as market hedges could no longer be relied upon, overall exposure (and leverage) has been taken down in an equally indiscriminate manner. Although this “technical” dislocation is likely to prove short-lived, the Gamestop debacle risks diverting attention from the real hedging crisis: namely whether the industry is now hedging the right investment risks?

For the past few decades, the biggest risk to developed market equity portfolios has been loss of capital through a deflationary bust. We are currently witnessing a monumental industrial restock whereby those companies with historically the least pricing power now have the best near-term prospects of earnings surprise. If average companies now look like growth stocks then inferior business models may matter less.

We have also seen unprecedented monetary stimulus,10 whilst the state has now provided large scale indiscriminate support to business through the provision of guaranteed credit and furlough. This has meant that despite the equity capital of COVID affected industries being largely wiped out, the risk of a wider deflationary economic bust has been backstopped by government. Shorting has become difficult – not because of Gamestop – but because the market is currently in the sweet-spot of a reflationary boom where there is a permanent bid for risky assets, underwritten by the State and the Central Banks.

The duration of the current reflation is still uncertain11. Previous recent reflationary cycles have been killed by the Federal Reserve, they now admit prematurely12. Is it different this time? The market is still sceptical that the Fed has genuinely rekindled inflation; will tolerate it by holding short rates down indefinitely; and will be able to suppress longer-term market interest rates once the bond market begins to panic.

There has been a political sea-change in attitudes to inflation to the extent that it is now embraced as the only tolerable solution to post-COVID fiscal deficits and increasingly the de facto enabler of big government which - emboldened by their pandemic suppression “success” - aims to now cure all society’s ills.

The negative consequences of the reflation are longer term: the crowding out of private capital and ideas, misallocation of capital, loss of productivity and eventually stagflation. At some point the market may begin to anticipate this new regime as more permanent, leading to a bear market in long duration equities and will instead prioritise the need to hedge the loss of purchasing power of fiat currencies through unproductive assets such as commodities.

The Gamestop mania and its ill-conceived moralism is therefore a distraction:

the more profound question is whether investors are hedging future risks to the purchasing power of capital, or only the risk of capital loss from a bygone age? 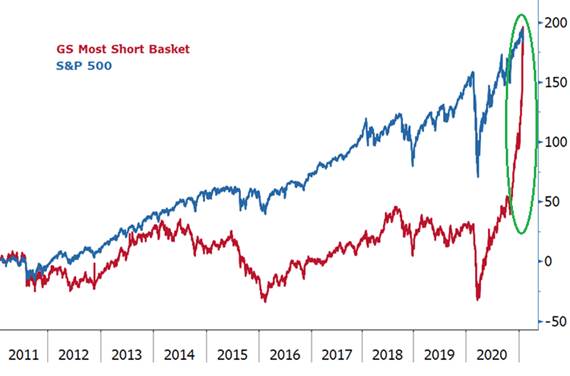 Source: Goldman Sachs, Bloomberg, as of Feb 2nd 2021. Past performance is not illustrative of future returns. For illustrative purposes only.