‘Only a perma-bear brings a knife to a bazooka fight’

“We already know that” says my son as I explain we are about to witness the destruction of economic activity and levels of unemployment (furlough aside) not previously seen since the Great Depression. He is not worried by the lack of an immediate cure or vaccine for the virus, which may mutate and subsequently return. He responds with glee at the prospect of the “lock down” extending for months, denying him school for the summer term. When I tell him that the steepest share price falls since the Wall Street crash of 1929 has castrated market bulls, he asks why I don’t grow some horns? Could this man-child’s insight WFH lead to another epiphany: is it time to venture forth, with competition diminished, into fertile investment pastures?

Recent Federal Reserve announcements of asset purchases of junk and municipal bonds confirms their commitment to potentially unlimited asset purchases (Fig. 1). Unlike previous iterations of quantitative easing which focused on “risk-free” Treasuries, this Fed is now buying municipal and junk bonds. Consequently, its purchases are going further out onto the risk curve and controlling not just the rate of interest but also the spread ponied-up by riskier credits. Although we focus on corporate earnings as usually the most variable determining factor in stock returns, it is ultimately outgunned by the value of money, the supply of which is controlled by central banks. If the value of money has collapsed, then the price of all assets denominated in money should increase. 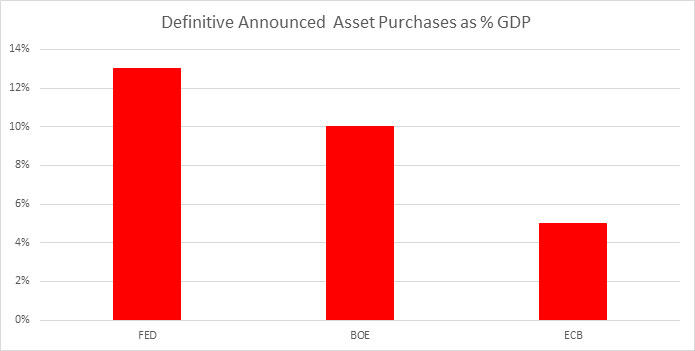 The economist Irving Fisher wrote in “The Money Illusion” published in 1928, that the whole financial system is based on a pretence that money itself had an intrinsic worth. It followed that as the price of money could always be devalued if more was produced, then the price of everything else in the economy, bought with money, would subsequently rise. This was recognised by the doyen of modern monetary policy, previous Fed Chairman Bernanke, who noted that that “under a paper-money system, a determined government can always generate higher spending and hence positive inflation”2. There is a very simple reason why we will avoid a second Great Depression: if central bankers are conjurors and money an illusion, magic tricks have improved immeasurably since the 1930s.

Like life in a Hobbesian state of nature without a government, our expectation has been that this bear market would be “nasty, brutish and short”3 but that the prolongation of “lock down” would allow a gradual closing of shorts and recalibration of market exposure.4 We understood that it would be wise not to base investment decisions on apocalyptic media frenzy or expert medical opinion (that has already retraced).5 We predicted that monetary and fiscal response would stabilise markets, by giving increased confidence that the recovery would be sufficiently vigorous once economic activity was allowed to resume.6 It is now possible that the only flaw in this thesis was to underappreciate the immediate impact, speed and quantum of policy response. Owing to the combined anaesthetic overdose of printing press and fiscal stimulus (Fig 2), the market now seems numb to the precise timing of economic normalisation. Instead of just witnessing a bear market rally, we may in fact already be in the recovery phase of the stock market “V”.

Successful investing in cyclical risk involves buying good companies cheaply at a time when the market is extrapolating short-term doom. This is inherently contrarian: you make money only by buying in advance of a recovery and selling on normalisation. What feels emotionally uncomfortable on the long side becomes a necessity for a disciplined short seller. Whilst running a short book I have experienced numerous market bottoms8 (Q2 2009, Q3 2012, Q1 2016, Q1 2019) where almost overnight stub equity, remaining from successful shorts, transforms from an effective market hedge to a deadweight on overall returns. For a long/short strategy that prides itself on uncorrelated returns, this poses a dilemma: to capture the best investment opportunities we must now embrace some cyclical risk and become more correlated to the market during this recovery phase.9

Bear markets end when shorts exhaust their downward moment owing to an absence of incrementally negative, unanticipated events. The biggest mistake I ever made as an investor was not being sufficiently hedged for the Brexit referendum result in 2016, then subsequently after the event, at lower prices, becoming incrementally bearish. The current sloth of stock market bears risk repeating my historic mistake. The stock market is often accused of being too short-term: for the next few months we should expect it to inhabit a parallel universe, as in fact it discounts what “we already know” better than human emotions normally allow and rewards those with the courage to think long-term. The consensual response will be almost uniformly incredulous. We experienced something similar, which I noted in 2009, recovering from the Great Financial Crisis, at the beginning of a decade long bull market:

“Market noise tells you how consensus is positioned: it is on the outside looking in, with its nose firmly pressed against the glass. The bear market has also engendered something of a “Peeping Tom” approach to financial markets: lots of fantasy about frenzied participation but in the absence of the necessary risk appetite, destined to always watch the action from a distance.”10

“Shark versus Crocodile: who would win?” asks my son engrossed in his new pastime of Fierce Animal Top Trumps. It inspires me to simplify a more complicated stock market debate, of confrontation between bull and bear: who wins if bulls have central banks’ bazookas and bears just teeth and claws?

‘The rational risk-taking of the restless caveman’

‘Dividends in peril: where now for equity income?’