‘European earnings outlook – more positive than you might expect...’

For European earnings, 2017 is so far panning out to be unusual - unusual because earnings are being upgraded for the market as a whole and for every sector within it. Whilst market commentators and investors continue to fret over macro and political concerns for Europe, the prospects for European corporate earnings are steadily improving. The chart below depicts the earnings revisions for the market as at the end of February over the last five years as well as this year - 2017 clearly stands out. 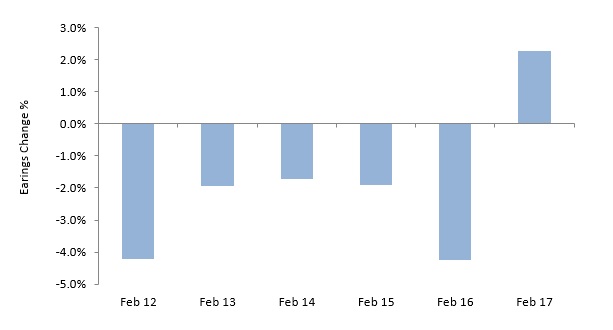 Although positive earnings upgrades for the market this year represents a sea change from previous years, of particular note is the underlying broadness of the upgrades across the market sectors. The chart below shows the upgrades to twelve month forward earnings across the ten major sectors. We have additionally included the sub-sectors of Metals & Mining from the Materials sector and Banks and Insurance from the Financials sector to highlight their underlying trends. 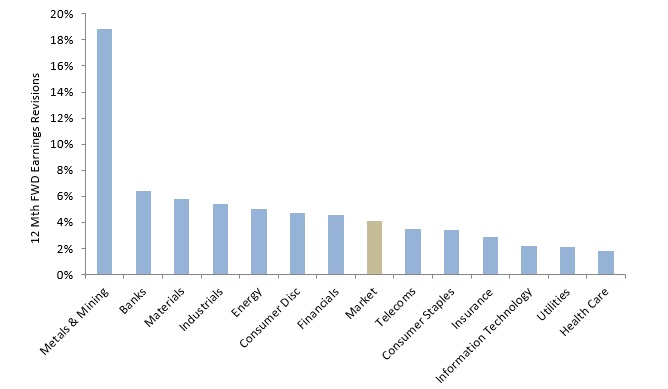 What is immediately clear is that the more cyclical areas are seeing above market upgrades (whilst the defensive areas are lagging). This is of course reflective of a general pick-up in underlying economic activity which has seen the Eurozone composite PMI index rise steadily for the last six months, with February’s reading the highest for well over five years (since April 2011) - a level consistent with over 2% GDP growth.1

Looking at the chart, the Metals & Mining sector stands out as seeing the largest upgrades at over 18%. This is predominantly related to Metals rather than Mining given the small number of listed miners in Europe ex UK. Industries such as steel are benefiting significantly from Chinese supply-side reforms across their heavy industries, which is lifting the global cost curve (as China is the dominant producer in many of these industries) and raising prices for products produced by European companies with demand well supported. Of course, these levels of upgrades are also reflective of the general scepticism embedded in consensus numbers, as many question the duration of the recent strength in prices. However, as we believe the driving force is primarily supply-side driven, we are more optimistic on the duration of the cycle and as such believe these companies will continue to surprise the market positively.

Although the Financials sector is posting above market upgrades, it is the Banks component that is driving this, with the Insurance sector lagging the market. Generally, European banks have reported positively this reporting season. With short rates unchanged, there remains little scope for net interest margin expansion, but loan growth is now evident and the general stabilisation and upturn in economic activity means fee and commission income is improving. At this stage, the potential for earnings upgrades remains limited, but importantly it would seem the scope for downgrades is now minimal. This is important as the Banks sector remains one of the largest contributors to overall market earnings.

Of course the year is still young, but a continuation of this trend of broad-based earnings upgrades would mean that investors will no longer need to “pay up” for earnings growth, as the “average” company will also be able to generate earnings growth. Indeed, sectors such as Consumer Staples and Healthcare (which together now represent almost a third of the market) are seeing below market upgrades and therefore at risk of a de-rating. As shown in the chart, the Healthcare sector is seeing earnings upgrades that are less than half that of the market.

With most market commentators cautious on Europe due to political and macro concerns, the underlying environment for corporate earnings is now considerably better than it has been for quite some time. Our investment process at Argonaut has earnings at its core, and for us we are positioning our portfolios precisely into those areas of the market where we see the greatest opportunities for corporate earnings.

‘The Outokumpu moment: was the reflation of 2016 just a one year global economic restock?’