“F*ck You 2016…a look back on the worst year ever” is the title of a best-selling book, currently sold out on Amazon UK. These are sentiments with which many in the active fund management industry will share, unless you manage a commodity fund or a value strategy, in which case it was a welcome relief (perhaps vindication) after years of purgatory. 2016 has thrown up unique challenges for active managers operating different strategies often irrespective of views on market direction. Generally, the more active the manager the worse the year. Mr. Market has made a fool out of us: for me it has been the most challenging year in the 16 years in which I have been running money.

The central tenet of our investment process is to look for earnings surprise: the identification of stocks which are likely to earn significantly more or less profit than the market is currently forecasting. This beat or miss relative to medium term expectations is, in our opinion, the biggest driver of alpha generation in stock selection. There are in general two risks to the process: we fail to execute in the individual stock analysis in the identification of surprise or earnings surprise stops being rewarded in the short-term owing to macro events that have the potential to radically change the future economic environment for stocks, rendering “bottom-up” stock analysis (temporarily) backward looking and irrelevant. 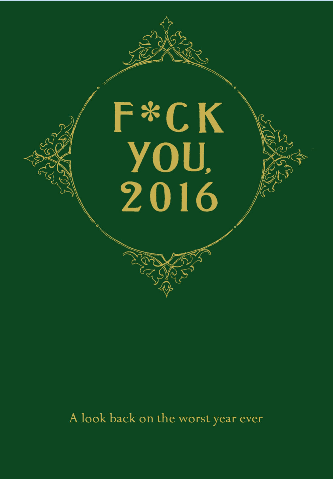 “Did We Do Something Naughty in 2015?” is the first chapter of the book. Should we ask ourselves whether we were too confident that the fundamental trends previously witnessed would endure and did we enter 2016 with a portfolio too full of historic winning trades? With the benefit of full hindsight it would have paid off handsomely to sell the previous year’s winners and buy its losers. However, contrarianism (mean reversion in stock returns) is not by itself a consistently rewarding strategy and to be an investable opportunity needs, in our opinion, to be supported by a reversal in fundamentals, none of which would obviously occur in 2016.

We are often told we are dogmatic about our investment process, which is no bad thing. However, it is important to distinguish this from having an inflexible view of the investment world. It has always been a great strength of our process that when the facts change we are not too proud to change our “Weltanschauung”. As such, although we have often had strong macro views at various points over the last decade we have never been wedded to an inflexible macro view that leads to dangerous “forever trades”. The difficulty in 2016, however, has been to establish whether the macro facts have really changed, and if they have only changed temporarily is this an investment opportunity or an investment trap? In other words, the process can cope with macro inflection points but only when they can be identified in a timely manner and endure long enough to be an investment opportunity.

At the end of January, with no obvious fundamental catalyst, animal spirits in the commodity world were miraculously rekindled and the global economy entered a reflationary period, having been in a period of deflation for three years (ever since the original “taper tantrum” over the Fed exiting QE). In my view, what distinguishes a bear market rally from a new bull market (and therefore what makes an investable opportunity for our earnings surprise process) is not just price momentum but the medium-term outlook for corporate profits. As such, we rarely pick the bottom of bear markets, but wait for confirmation that the price momentum can be sustained by an inflection point in corporate profits. The best example of this has been our general scepticism over often quite violent rallies in the share prices of Eurozone banks since the financial crisis, which as they have rarely been accompanied by any great improvement in the outlook for bank profits, have consequently consistently ended in tears.

The only area of the European market in 2016 where there has been a significant improvement in the outlook for corporate profits has been in commodity related equities, specifically the metals and mining sector. Although sentiment swung in Q1 it was only by Q3 that spot prices started to meaningfully exceed analyst forecasts and the sector began to experience significant earnings upgrades. Nevertheless, there continues to be a great deal of scepticism over the duration of the upgrade cycle, which from a fundamental perspective continues to be supply rather than demand driven and largely related to Chinese industrial policy shutting down loss making capacity. With spot commodity prices (excluding oil) still largely way above analyst forecasts, and in the case of steel with the potential for trade tariffs to further support earnings, this area of the market remains promising in terms of positive earnings surprise. The caveat is in truth we have very little visibility over how a stronger dollar or Trump trade policy will affect China and even less clarity over whether China will continue to apply the supply-side discipline going forward on which the reinvigoration of the steel and metals pricing has been based.

A subsequent chapter focuses on “Politics and Politicians” largely bemoaning Brexit and Trump. If the active fund management industry has had a poor year, then the science of electoral polling (psephology) has been equally discredited. For investors to pre-empt electoral outcomes, which to conventional wisdom seem remote, and change their portfolios in anticipation of such outcomes looks inspired in hindsight but somewhat less so on the balance of probability. Moreover, whilst those who have championed Trump as a game changer have so far been rewarded, such has been the capricious nature of markets that the Brexit referendum (and the defeat for the Italian political elite in its referendum) has so far at least had minimal impact on risk appetite, despite lingering uncertainties. There’s certainly a risk that the market has overestimated the future effectiveness of Trump in the US and underestimated the potential negative economic effects of anti-establishment politics in Europe.

The Brexit referendum coincided with a twist in BOJ policy which has been subsequently viewed as an admission that monetarism has been exhausted as a policy tool. Hence, since July yield curves in most major bond markets have steepened. Together with the resilience of the global economy and the subsequent hopes for fiscal stimulus in the US based on the election of Trump, it has been a remarkable period of cyclical and financial outperformance in equity markets and underperformance of bonds and bond proxy equities. Yet excluding the US, 10-year government bond yields have simply retraced their downward movement since March. Apart from the US, no other major Western economy is yet offering the prospect of fiscal stimulus. Whilst it is certainly possible (even probable) we have seen the top of the bond market, it is debatable whether bond yields will continue to benignly grind higher on the back of stronger global growth. Moreover, the moves in Eurozone banks witnessed over the previous few months – which has not yet been supported by a similar improvement in the outlook for profitability - would seem to imply a much more rapid return to economic normality in the Eurozone than either its politics or economic outlook would necessarily support. Will economic growth really be strong enough for the ECB to exit QE and embark on raising its deposit base without causing another Eurozone economic and sovereign crisis?

“Will 2017 be less shit?” is the final question asked in the book. We have found 2016 uniquely challenging for our investment process given the sheer number of potential macro inflection points. It has also been a year where we would seem to have suffered years of bad luck in one with not one but two long term investments subject to takeover bids unexpectedly blocked by the US government. As we look forward to 2017, we can draw comfort from an investment process which, by and large, has served our unit holders well for more than a decade. However, a return to a more predictable political and economic environment would certainly make for higher conviction stock selection. It would also be fair to say that some risk premium in markets would make for a fairer environment for shorting, which is essential to the uncorrelated return profile of our Absolute Return fund, but which has been deeply unrewarding this year. My experience of equity markets is that periods of high risk tolerance that are not backed up by rising corporate profits normally fail to endure. However, if there is any lesson from 2016 which can be extrapolated it is that when politics seems at its most malign, a way is normally found for at least a pragmatic economic muddle through. 2016 has proven that we and our strategy are not infallible, but sticking to our process always gives us our best chance of future success.

‘The Outokumpu moment: was the reflation of 2016 just a one year global economic restock?’