Amongst European oil majors Statoil’s profits are in our view almost uniquely geared to the price of crude given its lack of significant downstream assets and exposure to counter cyclical refining profits. Moreover, its upstream assets have historically been exposed to high-tax production in the Norwegian continental shelf, with the company’s expansionary capital expenditure focused in North American shale oil and gas production, all of which is now loss-making. Unbelievably, while oil is down 70% from 2012, analysts still expect Statoil to pay a dividend for 2016 that is greater than that of 2012 – the last time Statoil generated any free cash flow, when oil averaged over $112/barrel1.

In early December last year we published a blog about analysts’ oil price expectations, how devolved they were from reality and how this implied inherent risk for oil companies’ expected earnings (Oil Price Expectations and a House of Cards). Statoil’s current predicament is a perfect example. Most analysts are using what can only be described as “finger in the air” future oil price estimates to model company earnings. We think the only credible method is to use the current market forward curve in modelling what Statoil’s earnings could look like over the next three years, whilst at the same time incorporating analysts’ expectations for production volumes, capex and cost reductions.

The picture painted is bleak indeed. Before dividends, Statoil will not generate any free cashflow in any quarter over the next three years. Assuming it holds its dividend (as consensus expects) the company will have to take on considerable debt. This means management’s stated gearing ratio ceiling (net debt / capital employed) of 30% will be breached in Q1 2016, and instead of falling back down, the forward curve implies that gearing will continually rise, potentially breaching the 50% level in Q2 20181. The chart below depicts the diverging trajectories of Statoil’s gearing under two oil price scenarios - the current forward curve and consensus expectations (although analysts and investment banks have downgraded their oil expectations for the next three years over the last month, they still remain significantly above the current oil forward curve). 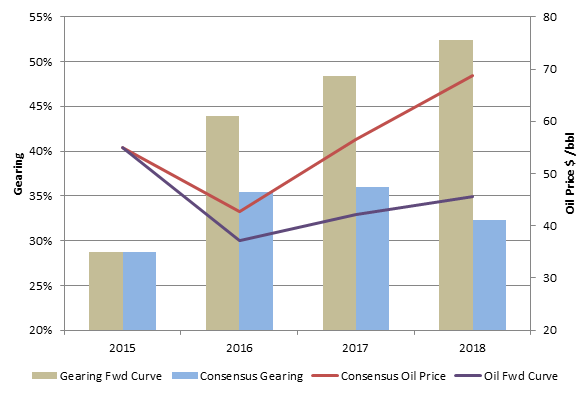 Whilst analysts’ reports declare that management remain committed to the current dividend level, we are not so sure. A quick browse through recent quarterly conference calls highlights that instead of being committed to a certain dividend level, management are committed to their dividend policy. These are two totally different things. Statoil’s dividend policy states “it is Statoil’s ambition to grow the annual cash dividend in line with long term underlying earnings”. Moreover, Statoil’s main shareholder, the Norwegian government is more likely to prioritise employment and investment over near-term shareholder remuneration. In fact there has recently been growing criticism across the political spectrum in Norway on this issue, with MP’s voicing concerns that Statoil is foregoing investment opportunities in the Norwegian Continental Shelf (NCS) in order to satisfy a perceived dividend commitment.

On the 4th February Statoil will hold its Capital Markets Day (CMD). Statoil’s dividend policy would appear to have become an albatross around management’s neck and a significant risk to the share price in view of consensus expectations that it will be maintained. The outlook for the dividend will be central to the day. Last year when they held their CMD oil was hovering around $50/bbl. Management were grilled on the company’s cash generation and dividend capacity. They presented three oil scenarios ($60, $80, $100) and stressed that they could maintain the current dividend at $60 oil through to 2018 primarily by flexing the capex and that their expectations were for a quick bounce back in the oil price. One year on and $60 oil is a distant memory. Hoping for a return to this level in the short term would appear at best naïve and basing a dividend funded by increasing leverage in what looks to us to be a prolonged downturn for crude would seem somewhat reckless2.

‘Anatomy of the European Banks Rout’