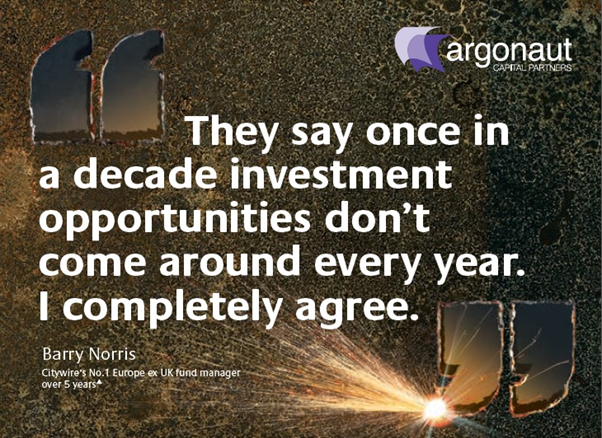 Back in 2009, if you drove out of London on the A4 toward Heathrow, just past Earl’s Court on the Cromwell Road, Argonaut’s one and only attempt at billboard advertising (Figure 1: “Argonaut European Alpha billboard advertisement 2009”) just may have caught your eye. Featuring a folksy, Buffett-like axiom that “once in a decade investment opportunities don’t come around every year,” the advert was an enthusiastic and dangerous attempt at market timing marketing. But the A4 motorists were a sceptical bunch: the great British public was either not convinced or not in possession of sufficient liquidity to engage in this once in a decade all-in stock market gamble. Perhaps they thought I was permanently bullish and had also commissioned the same adverts every year of the previous decade? Perhaps they just invested in bonds or Emerging Markets instead? For never in the field of the fund management was so much spent on so few adverts with so little tangible commercial results.

We fund managers are forever asked to give an opinion on market direction. This is one of the great paradoxes of the industry given that the average manager will default to a permanently optimistic outlook for their asset class with often the only variant being whether this is expressed with arse covering caveats or alternatively irritating zeal. The reality is that market timing is a very difficult skill to demonstrate consistently. Moreover, it is in practice often irrelevant given that long only managers are normally fully invested and long/short managers should (in theory at least) be market hedged. In the fourteen years in which I have been running money I think it would be fair to say that I have only really had conviction over market direction in four of them: 2004, 2008, 2009 and 2013. The truth is that I look to make my investment returns through my stock picking rather than my views on market direction.

Nevertheless it is fair to say that although my billboard was a commercial failure I am thankful that it did not at least prove a professional embarrassment. 2009 proved to be the “once in a decade” investment opportunity as since then the European stock market has doubled in price, but not necessarily for the reasons I had envisaged back then. As Figure 2 (“The European stock-market since 2008: price, earnings and valuation”) illustrates, although European corporate earnings recovered spectacularly in 2010 (rising by over 40% in aggregate) since then they have at best tracked sideways, meaning that most of the return generated over the bull market (and all of the return since 2011) has actually come from a re-rating (from a PE ratio of just 8x to a PE ratio of 15x). This is not illogical given the more eye watering valuations in the bond market: as bond yields have fallen this has increased the relative attractiveness of equities and the willingness of investors to pay higher multiples for the same corporate earnings. However, we would be more comfortable if our asset class was generating more of its return from rising corporate profits rather than just more expensive valuations.

Figure 2: The European stock-market since 2008: price, earnings and valuation 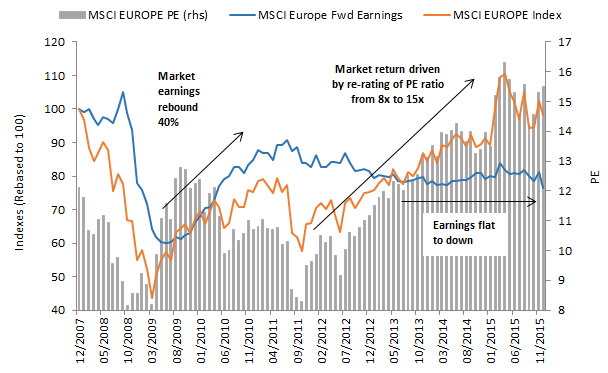 There have been an elite group of stocks which have, largely for idiosyncratic reasons, seen a bull market for their profits but in general – despite the overall upward price movement on the market - it has actually been a difficult environment for corporate profits overall. The average company has found life tough. As a consequence, the type of characteristics which “growth” investors always look for (competitive advantage, strong balance sheet, high return on equity) have been more important in this cycle than normal. By contrast, “value” investors have commonly found that “cheapness” has been based on estimates of profitability which have subsequently collapsed. Although “growth” managers will argue that the stock market always rewards “quality”, this was not the case in the previous market cycle (see Figure 3: European stock market performance: “growth” vs. “value” since 1993). The extreme outperformance of “growth” vs. “value” since the financial crisis needs to be viewed in a wider perspective of uniquely favourable circumstances which should not be expected to endure indefinitely. 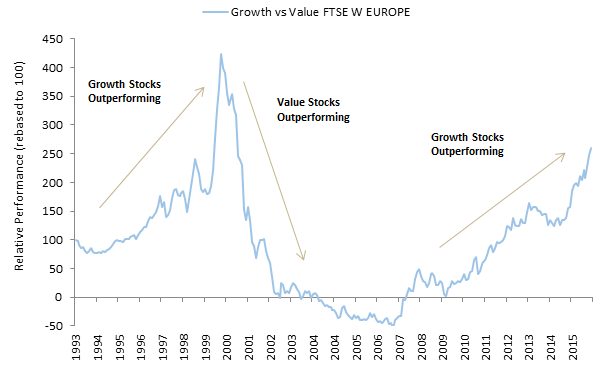 In addition to cheap money, most bull markets also have a seductive narrative (e.g. commodities and emerging markets (03-08), technology (97-00)). In this cycle the narratives have actually been almost exclusively negative: Eurozone sovereign crisis, sustainability of Chinese growth, collapsing commodity prices, deleveraging of balance sheets, anaemic economic growth. There have been few areas of the stock market (perhaps with the exception of the airline industry) which have experienced a profit boom. In the absence of a positive narrative, simply holding a portfolio of stocks with consistent and predictable earnings – “bond type equities” - has been rewarded in this cycle to an uncommon degree. As such the hegemony of bonds as an asset class has even extended to a bond investor take-over of the equity market. Solely dependent on liquidity, with the return generated almost exclusively from yield compression, the absence of any additional positive narrative has made this the ultimate cheap money bull market.

In all probability the Federal Reserve is about to embark on a rate hiking cycle (the scale and duration of which will be dependent on the recovery on main street). This would be the first tightening of US monetary policy since June 2006 (see Figure 4:“US, European and UK key central bank interest rate”). It is therefore highly symbolic and a challenge to a crude cheap money bull market. It should also be noted that the previous attempts by the ECB to raise rates in 2008 and 2011 were catalysts for a significant rise in market volatility. In all probability returns will get much harder from here: further returns from simply higher valuations would seem unlikely; “bond type equities” will likely be de-rated as bond yields rise. Of course in order for there to be a parallel shift in expectations along the interest rate curve the US economy would need to demonstrate it could tolerate both higher rates and the consequent economic fall-out elsewhere in the world (particularly Asia and other Emerging Markets) as dollar liquidity is withdrawn. As such the biggest problem for “Wall St.” may now prove to be the resilience of “Main St.” 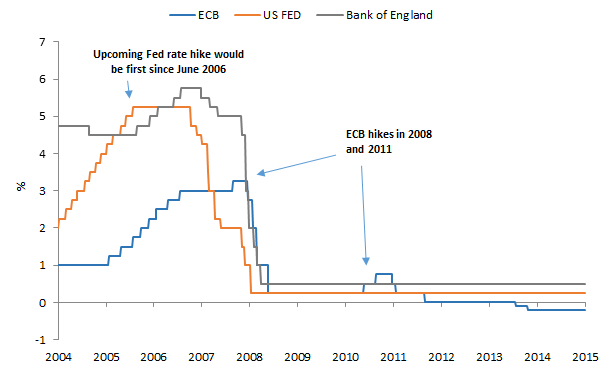 We should also consider European equities in a wider perspective. The asset class having survived a near death experience with the 2011 Sovereign Crisis. It is therefore perhaps too early in Europe’s renaissance to be calling the end of the cycle, not least because much of Europe hasn’t fully recovered from the previous cycle, particularly in southern Europe and the banking sector where profits are still well below the previous peak and would seem to be in the early stages of a multi-year recovery (see Figure 5: “Southern Europe and Bank earnings vs. European aggregate earnings”). Economic data has continued to be resilient and so far relatively unscathed from the global manufacturing slowdown. The massive stimulus from depreciation of the Euro (itself a result of the different direction of US interest rates), the lower oil price, the end of bank deleveraging and continued readiness of the ECB to add further stimulus if needed offer some encouragement that the asset class as a whole may now be the least badly affected by the tightening of US monetary policy. 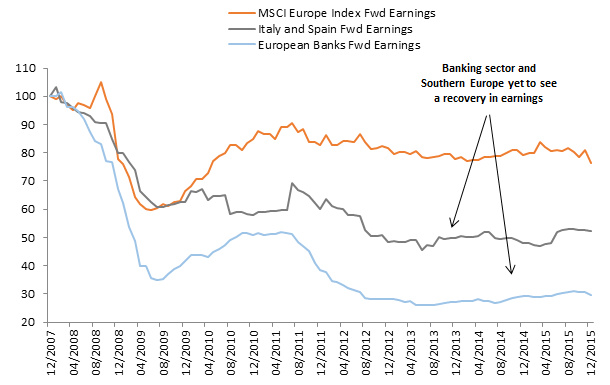 As the A4 bill-board predicted, 2009 was the “once in a decade opportunity” and it is difficult to get more enthusiastic after 7 years of a bull market about the overall direction for global markets in 2016. The leitmotif of this bull market has been cheap money and the main source of global liquidity the US Federal Reserve. The first tightening of US monetary policy is therefore highly significant and can only be a negative market event. The good news is that we continue to see significant stock specific opportunities and that Europe as a whole is likely to be least badly affected (particularly if returns are currency hedged). Market timing is notoriously difficult but we should realise this is a mature bull market in global assets: I have a 7-year itch about 2016.