“Everything we do is about being Here for good – in business, through life, and when it matters most for our clients”
Standard Chartered mission statement1

If it is easy to be cynical about the current mission statement of Standard Chartered, then we must also admit to being sceptical about the prospects for the bank in general. It has been suggested that yesterday’s first half results from the bank might have seen a “kitchen sinking” of bad news by new management. We disagree. We think that asset quality will continue to deteriorate and the worst is yet to come. We also think that the company’s historic provisioning policy has been far from prudent and that the failure to take a sufficiently counter cyclical approach to provisioning in the good times will now lead to shareholders now having to endure much greater cyclical pain as Asia and Emerging Market economies continue to slow. We would also suggest that the bank has experienced a much lighter touch than its domestic peers from the UK regulator and that this is about to change. We think all of this will result in further bad news for Standard Chartered shareholders.

It is easy to lose perspective. Standard Chartered (STAN) has been a fantastic success story, with shareholders equity increasing from $6bn to $46bn since 2000.2 Over the same time period its balance sheet has also expanded from $53bn of customer loans to $282bn.3 This corresponded (or rather was directly linked to) an abnormally long period of robust Asian and EM economic growth, broken briefly by the global financial crisis of 2008. However, just as many financial commentators have made the mistake of extrapolating EM economic growth since 2000 irrespective of any analysis of its sustainability, so we would argue STAN has fallen into the trap of believing that the EM credit cycle was dead: that they did not need to take insurance for bad loans on the balance sheet in the form of loan loss provisions (LLP) because they had not been experiencing any problems with asset quality. STAN wasn’t like other banks: it did not do bad loans.

Take Hong Kong retail mortgages as an example. At the end of 2014, for example, STAN had retail mortgage lending in Hong Kong of HK$174bn ($22bn), supported by just HK$5m of loan loss provisions!4 In other words, the implication is that the entire HK mortgage book has near to zero risk of loss. The bank might argue that asset prices of Hong Kong real estate have risen strongly providing comfort in collateral values and there are no customers are defaulting: so they don’t need to take provisions for bad loans. But this ignores the inherent cyclicality in lending money and the risk that the future might not look like the recent past. Failure to provide for the risk that good loans might turn sour in the future means not only that historic profitability was over-stated but that STAN’s future prospects will be weighed down by the need to make amends for these past failings.

As we can see from Figure 1 “Does Standard Chartered ever make bad loans?” (below) the bank went from having Loan Loss Provisions on its balance sheet equating to 3% of its loan book in 2000, which was similar to Eurozone peers, to LLP’s equivalent to just 1.5% of its loan book for most of the last decade, significantly below the 3-5% Eurozone peer group. So whilst the industry in Europe accepted that not all loans were going to be fully repaid, STAN’s management appeared to believe that the Asian and EM credit cycle was dead. Whilst we think we are beginning a new credit cycle in Europe with shareholders in European domestic banks acutely aware that money lending is a cyclical industry, as the Asian credit cycle turns down, will this cyclicality come as news to Standard Chartered and its investors? 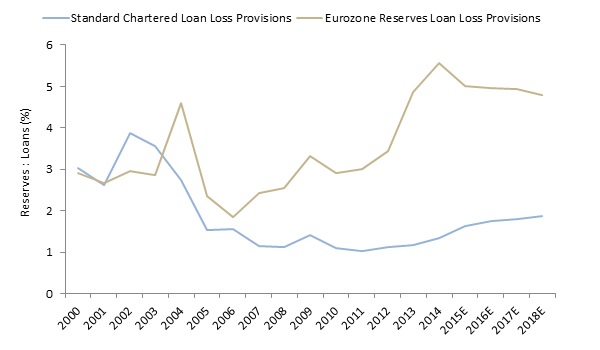 Of course it could be argued that we are comparing EM apples with EZ pears and that STAN’s provisioning should be compared with Asian peers. It should also be noted that new management would seem to have begun to recognise that a more conservative accounting policy is needed for provision charges, with an increase in the banks’ corporate loan non-performing loan (NPL) coverage ratio from 47% to 52% in yesterday’s numbers.6 We would point out that this still leaves STAN’s coverage ratio meaningfully below its Asian peer group (see Figure 2 “Less prudent than peers?”). Indeed, we would argue that after a robust period of economic growth during which bad loans should be infrequent, it is appropriate for all banks to run coverage ratios of above 100%, so that there is a safety buffer of risk absorbing capital when the credit cycle turns. STAN have argued that each of their loans is assessed on an individual basis and that their confidence in collateral values does not require higher coverage. This is nonsense. Every other Asian bank could also argue this but have chosen instead to adopt counter cyclical provisioning policies with coverage ratios above 100%.  Either STAN has to take a proper multi-billion clean up charge for provisioning7 or it will require a structurally higher cost of risk in its P&L which will continue to weigh on profits for years to come. Either way its shareholders will lose.

We also think that asset quality in its underlying markets is deteriorating much more rapidly than the company’s recognition of non-performing loans would suggest. Yesterday’s H1 statement revealed that STAN’s corporate NPL ratio had risen to 4.5% (from 3.8% at the end of 2014)9 but this is still relatively low by historic emerging market standards in a cyclical downturn. Our experience of the downturn in asset quality in Europe was that banks were much more willing to restructure loans and that this often masked a deeper downturn in credit quality (or at least delays or in some cases is still delaying its recognition). We suppose the same is true in Asia and EM. Hence since 2011 STAN has seen significant growth in the “restructured loan” category, which are now equivalent to the stock of non-performing loans and which are excluding from analysis of coverage ratios (Figure 3 “Restructured loans now equivalent to NPL’s”). This indicates that asset quality is already more problematic than headline numbers would suggest.

STAN’s new CEO has been candid admitting “we grew aggressively in certain markets, we accepted high concentrations by industry, by geography and by individual borrower, and we have found some weak operational controls which exposed the Group to losses and fraud”10 which does not fill us with huge amounts of confidence that all the skeletons have yet fallen from the closet. Indeed, we think that the credit cycle will get much worse for STAN. Management currently identifies its problem areas as “commodities, China and India”11 but it is frankly difficult to identify any area of the STAN balance sheet that is now particularly safe, or at least early cycle. Around a quarter of its corporate loan book is exposed to Hong Kong which operates a US dollar peg, whereby bank lending is effectively priced off the US yield curve in order to maintain a fixed exchange rate, irrespective of whether it is appropriate for the Hong Kong economy. The credit cycle in Singapore, STAN’s other main Asian exposure, which operates a wider targeted currency peg, is similarly correlated, albeit to a lesser degree. Both Hong Kong and Singapore have undergone multi-year expansion in credit which accelerated as a result of Fed Chairman Bernanke’s QE.12 So when the Federal Reserve begins its hiking cycle, asset quality can only deteriorate further for STAN and the bank will likely face a synchronised credit downturn across all of its markets, even in those which have hitherto proven resilient, particularly now the Chinese fixed asset investment boom would also appear be over. This makes market forecasts that P&L provision charges will peak at 82bps13 cost of risk in FY 2015 somewhat ludicrous (particularly as the annualised cost of risk was 114bps14 in H1).

We also see rising regulatory risks for STAN. Previously, the focus of the UK regulator has been on domestic economic and financial risk. On December 1st, the Bank of England is expected to release the results of a stress test which will specifically look at direct exposure to cyclical downturn in Asia, including Chinese economy growing at just 2%, Hong Kong GDP falling 6% and HK property prices back at 2010 levels (-40%) as well as a $38 trough in the oil price!15 In other words, a cynic might think it is a test which has been specifically designed for STAN to fail. As STAN admits “the focus of the BoE stress tests are external risks to the UK and accordingly, the stress parameters are more focused on emerging markets…..Consequently the stress parameters are more severe”.16 As such, management might be motivated to use the stress test as a catalyst to raise significant new equity from its shareholders, which in our opinion it needs anyhow to deal with the forthcoming downturn in asset quality for which it would currently appear insufficiently prepared.

We think that a benign outcome from STAN is that the bank is managed in the interests of debt-holders and regulators for the next few years as management de-risk and de-lever the balance sheet whilst the balance sheet is rebuilt with materially higher P&L provision charges and current shareholders are diluted through the issuance of new equity. Pre-provision profit will also fall as costs cannot be cut fast enough to compensate for falling revenues. We cannot square even this benign scenario with consensus analyst forecasts that the balance sheet and revenues continue to grow, provision charges peak this year and the share count remains constant. So even in this benign outcome, current investors will need long time horizons and the belief that Asia, EM and commodities are facing short-term headwinds rather than a structural downturn. Our experience of the credit cycle in Europe would suggest it is more prudent to be cynical and to wonder about being “here for now”, rather than “here for good”.

‘The limits of low volatility and the deviancy of standard deviation’