As we discussed in January (“Grecian 2015”) and April (“Mario’s Monster Comes to Life”) the confrontational scenario between the Syrizia-led Greek government and its EU and IMF creditors is coming to a head: Greece does not have access to funds to meet the €2bn of IMF funding due to be repaid in June and July and the €6.5bn of government bonds scheduled for redemption in July and August (see Fig. 1).1 So unless a third bail-out programme can be agreed with its creditors, Greece will default, with the only question being whether this happens in June (perhaps as early as June 5th) on its IMF obligations or default is delayed to July when much larger bond redemptions become due. Whilst a last minute deal which avoids default is currently seen by most market participants as the most likely outcome, it is possible that the Syrizia government may believe that a face-saving deal with creditors might be more likely after a default. Any Greek default would, however, likely be Syrizia's final act of brinksmanship: there is a real danger that Greece over-plays its hand, leading to the ECB withdrawing liquidity support to the Greek banks and Greece exiting the Euro. This would be a tragedy for Greece, but not I believe for the rest of Europe. 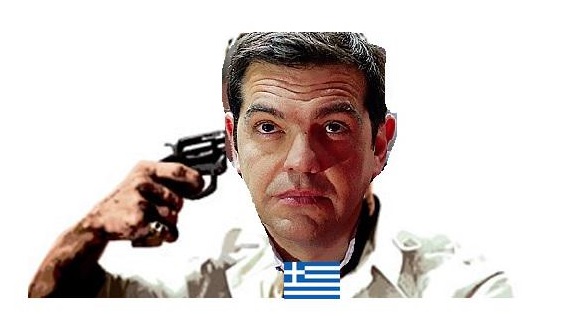 Whilst the creditors (aka “The Troika”) have shown a willingness to lower the cost of interest on their Greek debt, extend maturities and allow the Greek government to target a lower primary surplus, Syrizia have failed to engage constructively over economic reform, in particular over the key issues of generous state pensions, inflexible labour markets and state privatisations. Without these concessions, a third financial assistance program (following the €110bn original bailout in May 2010 and the subsequent €130bn bailout in February 2012)2 would not be credible. Without economic reform, the Greek economy has little chance of regaining the necessary competitiveness within the Eurozone. As such, continuing to provide financial liquidity to an economy that could never realistically wean itself of financial aid would just be throwing good money after bad. As such the Troika would likely have little choice but to allow Greece to default as the lesser of two evils, at least over any reasonable time horizon.

In addition, appeasing Syrizia would establish a precedent whereby every economically illiterate populist political movement in Europe could proclaim not only the end of “austerity” (or rather any credible aspiration for governments to balance their books) but also any need to recognize that Europe’s continued wealth and position in the global economy cannot just be taken for granted, but is dependent on its sovereign nations taking often unpopular decisions that will create more efficient government, less red tape for businesses and therefore more competitive economies. Without this, anaemic economic growth and depressing levels of unemployment, particularly amongst younger people, will be here to stay. The decision to let a recalcitrant Greece go is therefore symbolic of a profound economic debate over Europe’s economic future.

Of course, there will be concerns over “contagion” effects of the Greek default, particularly given that previously Euro membership was considered inviolable. However, the longer term risks of "political contagion" need to be weighed against short-term "financial contagion". To my mind, the Euro is only credible if membership comes with rules, rather than status, which are inviolable, and that if these rules are consistently and deliberately broken, this leads to membership being withdrawn. Besides, no other Eurozone government has the uniquely unsustainable levels of debt as Greece, nor a government that has no regard for economic reform or the rules of Eurozone membership. The other peripheral countries have on the whole accepted the need for fiscal responsibility and a more liberal economy which has allowed htem to regain competitiveness. The double standards which Syrizia's negotiating stance implies have clearly not been lost on the other peripheral governments, who have taken a firm line against Greek appeasement in the current negotiations.

We have written previously (“Mario’s monster comes to life”) on why despite it being likely that Greek debt default and/or exit from the Euro would be initially viewed as a significant negative financial event, that the subsequent financial and economic contagion can be managed. The Greek economy accounts for just 1.5% of the Eurozone economy.3 Although Greece has €322bn of government debt, 78% of it is ultimately owned or guaranteed by other Eurozone governments and the ECB with record cheap access to capital and ability to print money respectively.4 The ECB would likely need to be officially “recapitalised” as a result of its exposure to Greek government bonds and its ELA exposure to the Greek banks of €80bn (and total Eurosystem funding of €115bn). But even assuming there would be zero recovery by creditors, which seems somewhat unlikely and unprecedented, or new money printing, the entire stock of Greek government debt would increase debt/GDP ratios across the Eurozone by just 3%.3 The ECB’s QE is also now a credible backstop to prevent a sustained spike in peripheral yields, and its bond purchases could be accelerated if necessary. 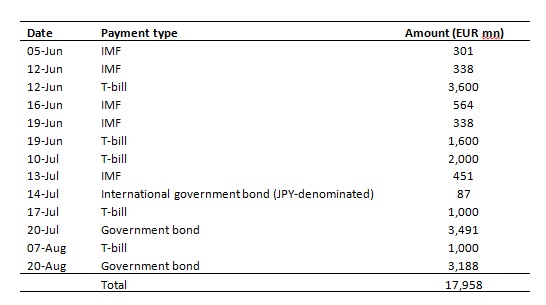 Whilst we know that the Greek government is running out of cash, in the absence of an end to Greek brinksmanship, it seems likely that the final roll of the dice will be a sovereign default. We do not yet know which bond they will default on (IMF/EU/ECB/T-bill/private sector bond) or the exact consequences of default. It is worth pointing out that a Greek default won’t necessarily lead to a “Grexit”, as this would likely only happen if and when the ECB withdrew Emergency Liquidity Assistance (ELA) to the Greek banking sector. The rules of providing ELA would seem to suggest that it can only be provided to “solvent” institutions https://www.ecb.europa.eu/mopo/ela/html/index.en.html). Therefore if the sovereign had defaulted, could its commercial banks still be regarded as “solvent”? Possibly, but this could be nothing other than a stop-gap solution, given likely accelerated capital flight and loss of credibility.

Syrizia may believe that once Greece has defaulted on a bond, the Troika may concede to its demand and a deal struck. The Troika may equally conclude that at this stage, only the fall of the Syrizia government and a more constructive dialogue with a new government would likely save Greek membership of the Euro. If and when the ECB withdraw access to the ELA, Greece would be forced to introduce a parallel currency and institute controls to prevent accelerated capital flight. This would likely be a tragedy for Greece but not for the rest of Europe.