Unprecedented stimulus in the Eurozone – sovereign QE, negative deposit rates, depreciating Euro and cheaper oil – is having a positive effect not just on asset prices but also on underlying economic growth. Economic lead indicators in Europe bottomed in October 2014 and have been recovering steadily since, with the biggest improvement witnessed in Italy, hitherto the only peripheral economy not to have already exited a multi-year recession. With the caveat that there have already been several false dawns, this is a welcome development for European equity investors: we should begin to see a return to meaningful corporate profit growth, not just amongst European exporters benefitting from translating foreign profits back into Euros, but also amongst companies geared to the pick-up in the domestic European economy. As such, if Mario Draghi is Frankenstein and the Eurozone economy, Frankenstein’s monster, then Mario’s monster has come to life. 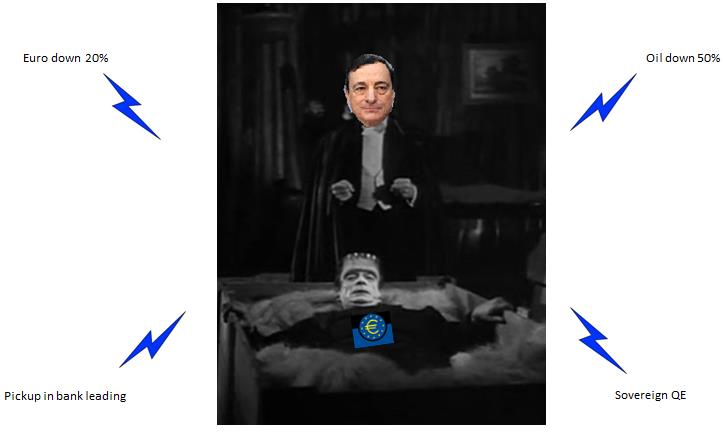 It is difficult to underemphasise the significance of ECB QE, which had previously been seen as a policy tool which the ECB could or would never implement but for which now there is essentially an open-ended commitment. As Fig. 2 illustrates, even with the c.€1trillion of asset purchases announced to September 2016, the ECB balance sheet is currently still quite modest in size (30% of GDP) compared to others, particularly when considering the other €2 trillion of assets are mostly LTRO which will come off the balance sheet as they mature.1 The advantage of sovereign as opposed to private sector QE is that it is a big, liquid market where the ECB can put a lot of capital to work as stimulus. Asset purchases announced by the ECB amount to around 7.5% of Eurozone GDP. With an estimated Eurozone fiscal deficit of just 2.2% of GDP this year, the stock of Eurozone public debt available to investors will actual decline (for the first time since WW2).2 As such, we are not only witnessing what can only be described in the context of financial history as insanely low yields on most sovereign bonds, but a likely crowding out of institutional investors from traditional fixed income markets, with liquidity inevitable ending up in other asset classes, including equity markets.

ECB sovereign QE is intended for secondary market purchases of government bonds and can be viewed in parallel to the existing potential for the ECB to coordinate government bond purchases in the primary market through ESM/EFSF mechanisms. The logical conclusion of these policies is that the ECB will, if necessary, monetize the debt of all Eurozone sovereigns so long as their governments are not beyond the pale. Whereas there was previously a risk that all Eurozone governments had borrowed in a foreign currency which they ultimately could not print, the ECB has now established itself – like the Fed and the BoE – as a credible buyer (as well as lender) of last resort. As a result there should be a much diminished (but not fully extinguished given the absence of explicit fiscal and of genuine political union) credibility gap as to the long term viability of the Euro. However, the main cause of the Eurozone’s unique vulnerability to a sovereign debt crisis is now largely removed.

But this does not mean that Eurozone countries cannot still default if they are kicked out of the currency union for refusing to abide by the rules. The fly in the ointment is the Troika defying Greek government. As we discussed in January (“Grecian 2015”) the confrontational scenario between the Syrizia-led Greek government and its EU and IMF creditors is likely to come to a head over the summer when €6.5bn of government bonds are scheduled to be repaid. The Greek government does not currently have access to sufficient funds. It is unlikely that the EU and IMF will agree to afford Greece sufficient liquidity unless a credible programme of economic reform is established where there is some confidence that the reforms will be implemented. It also seems unlikely that the current Greek coalition would have sufficient political support to implement such a programme of economic reform. As such, unless a new coalition – with wider political support perhaps including New Democracy – can be formed, there might be an end-game either involving the Greek government introducing exchange controls and a parallel currency and/or the ECB being obliged to cut off emergency liquidity to nationalised Greek banks (that might have previously been commandeered by the Greek government in order to use ECB liquidity to purchase Greek government bonds as an alternative to EU/IMF assistance) in order to avoid moral hazard.

Particularly in view of the firewalls now in place for Eurozone sovereign debt, I no longer believe it is clear that the Eurozone would not be better off, certainly in the longer term, by ejecting a recalcitrant Greece from Euro membership even this leads to a short-term market negative event of Greek debt default. As we can see from Fig. 3 below, only €39bn (12%) of Greek government debt is held by private investors: the biggest amount of capital at risk (€217bn or 69% plus the €27bn or 9% held by the ECB) is largely ultimately owned by other Eurozone governments, which have record cheap access to capital, and should be put into context of the €60bn a month of new money being created by the ECB in asset purchases.3 In fact the entire stock of Greek government debt (€322bn) amounts to just over five months of ECB QE.3 These asset purchases could also be accelerated in order to shield the rest of the Eurozone economy from the negative fall-out from a “Grexit”. Although I accept it is a non-consensus view, and would fully expect an initial significant negative reaction, I think ECB QE is a “game-changer” in terms of managing the negative consequences of “Grexit”.

It is also worth considering that the Eurozone banking system now has minimal exposure to Greece and that the system itself in aggregate has now been through a very extensive recapitalisation. Irrespective of the record loan loss provisions that banks have taken from shareholders profit and put on their balance sheets as capital to absorb losses from bad loans, if we look at the ratio of shareholder’s equity to total assets (Fig. 4 below), we can see that bank leverage has been reduced from a level of 30 times at the peak of the crisis (interestingly a level also previously witnessed in the mid-1980s) to around 18 times today.4 Measured on this basis alone, European bank balance sheets have never (at least as far as data series go back to the early 1980s) been as strong in aggregate as they are today (although we would also note that this does not mean that individual banks do not still need to raise capital). As such the commercial banking system in aggregate should be better able to absorb financial shocks. It also means that having been run in the interests of debt holders and regulators for six years of painful deleverage, banks can now make credit more readily available to the real economy and return to growth in assets (thus improving return on equity for shareholders).

We have learnt to be sceptical of “eureka moments” for European equities as an asset class and instead have focused on the discipline of identifying superior (and inferior) corporate earnings trends in our stock selection, attempting to diversify away from a binary bet on macro factor risk through holding idiosyncratic earnings surprise dear in our portfolio construction. Nevertheless, over the past few years we have consistently identified the greatest potential for profit growth to be in those areas of the market, namely retail banks and peripheral stock markets, where corporate profitability was most depressed, albeit noting its recovery was largely dependent on an as yet elusive return to economic growth. As such the coming to life of “Mario’s Monster” would not only have fundamental implications for the future credibility of the Euro, but also legitimately change stock-market leadership away from highly regarded, internationally diversified companies or those with predictable “bond-type” earnings, toward stocks previously regarded as amongst the living-dead.