Increasing political risk was behind the sale of our residual Greek bank positions in early October, since when the Greek market has fallen by 25%. The failure of the Greek parliament to agree a Presidential candidate will lead to earlier parliamentary elections on January 25th 2015. Syrizia (who advocate Greece leaving the IMF creditor programme) are leading New Democracy in the polls (currently 30% to 27%1). And although Greece has achieved a primary budget surplus, it still requires external financing during 2015 (see Fig 1). The extension of the IMF credit line is due to expire at the end of February. As such the absence of a Greek government willing to fulfil its obligations to the Troika and able to negotiate constructively with its creditors will likely create negative headline risk. However, even in a confrontation scenario it is extremely unlikely this leads to a “Grexit” or wide-scale contagion of the Euro-zone periphery. Moreover, a formula for a sustainable solution to Greek sovereign debt – let’s call it “Grecian 2015” – is ultimately at hand.

“Grecian 2000” is the all-time best selling product using the “Grecian Formula”, first introduced in 1961. It has been sold for over fifty years on the basis that it can return a user’s natural hair colour back from the signs of grey and ageing. Moreover, the product claims that it could restore natural colour in a gradual way so that the user would not be made to look silly and did not have to be embarrassed when challenged about it. Amidst the potential for acrimony over renegotiating the terms of Greece’s IMF assistance there is a formula that is capable of restoring the Greek balance sheet back to a sustainable basis without embarrassing either the Greek government or her EU and IMF creditors. 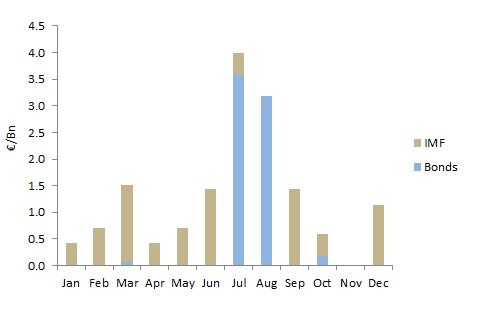 Although Greece’s total debt outstanding (€322bn2) is still unsustainable relative to the current size of the economy (179% GDP), 76%3 of it is held by EU governmental institutions and the IMF, who although sensitive to “losses” do not require a market rate of interest and potentially only require the repayment of principle at some point in the distant future (See “Argonauts return to Greece” December 2013)  Therefore any new Greek government is likely to focus negotiations for debt relief around reducing the net present value of the official sector debt outstanding through a less aggressive amortisation schedule and a lower rate of interest. This is the “Grecian 2015” solution.

In the absence of a last-minute swing of undecided voters back to New Democracy, it seems likely that Syrizia will be the largest single party post the elections (see Fig. 2) and therefore be awarded an additional 50 MP’s (out of a total of 300). Psephologists currently estimate that unless most of the smaller parties fail (to cross the 3% minimum threshold for parliamentary representation)4 Syrizia would most likely need at least one third of all votes (and possibly as much as 40%5) in order to form a government outright. Therefore even in the event that Syrizia “wins” the election either this will necessitate a more moderate and practical stance in order to form a coalition (which communist factions of the party may never agree to) or there will be further elections, most likely starting in March, until either Syrizia achieves an independent majority or New Democracy is the largest party and consequently forms a more market and creditor friendly coalition. 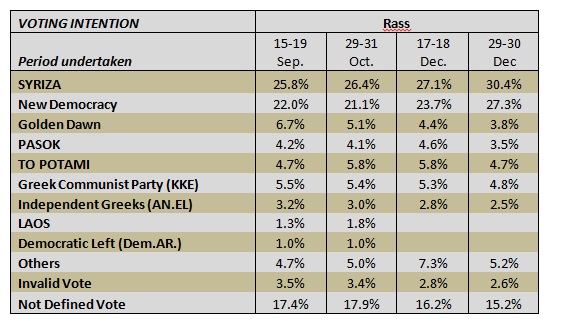 Greece’s creditors are, however, much more likely to want to reward a New Democracy led coalition than potentially encouraging further trouble by making concessions to Syrizia. As a result, post-election negotiations with creditors will almost certainly be difficult. Whilst the IMF will likely readily agree to a further extension of the credit line, particularly without a Greek government to negotiate with, Greece’s creditors would have little motivation to make any long-term concessions to any Syrizia-led government (coalition or not) in the knowledge that without early and decisive delivery on its populist and unrealistic promises, the factions within a Syrizia government (particularly its communist “leftish platform”) would quickly splinter, in all probability leading to new elections and as a result of a fragmentation of Syrizia, a New Democracy-led government.

Moreover, any Syrizia led government would not be negotiating from a position of any strength. What exactly are they going to do if the Troika refuse to renegotiate? A Syrizia government could unilaterally declare austerity at an end and increase public spending but how would this extravagance be financed? Not by any external creditors. This leaves the Greek banks looking vulnerable, potentially being bullied into buying Syrizia T-bills and the ECB in a difficult situation as lender of last resort to the Greek banking system. But rather than refusing to lend to the Greek banking system and ultimately force Greece out of the Euro, the ECB could just reactivate the Emergency Liquidity Assistance (ELA) programme with the Bank of Greece and keep lending to the Greek banks, albeit at a penal rate with a severe haircut on collateral. As such the ECB could keep Greece on a Euro life support machine longer than a Syrizia government would be able to tolerate the damage to the Greek economy.

There is no credible scenario whereby a Greek government voluntarily leaves the Euro. The Greek economy has regained competitiveness and is expanding again. No one in Greece is arguing that Greece has the wrong exchange rate: Greece’s problem is a uniquely unsustainable debt burden (other peripheral Eurozone countries do not have the same unsustainable levels of sovereign debt). Only if the European Central Bank refuses to extend credit to Greek banks as lender of last resort would Greece effectively be expelled from the Euro and its government forced to re-issue its own currency as an alternative medium of exchange. Given there is no support for “Grexit” within Greece and this would be the worst possible option for Greece’s creditors in terms of debt recovery6, if a “Grexit” were to occur then it would almost certainly be by accident, rather than design.

There are also a number of reasons why any “Grexit” is unlikely to lead to further contagion. First and foremost, the rest of the periphery (ex-Italy) is now experiencing above (Eurozone) average economic growth (Fig.3), largely as a result of painful internal devaluations. Whilst northern Europe was booming and southern Europe bust, there was a logical economic argument for different exchange rates. This is no longer the case (although the overall growth rate currently continues to be anaemic). Only anti-single currency ideologues would now still argue that southern Europe requires an external devaluation (i.e. a new currency) to improve their economic fortunes. Any sensible economic analysis of the costs and benefits of a peripheral country leaving the Euro would rule out exit. 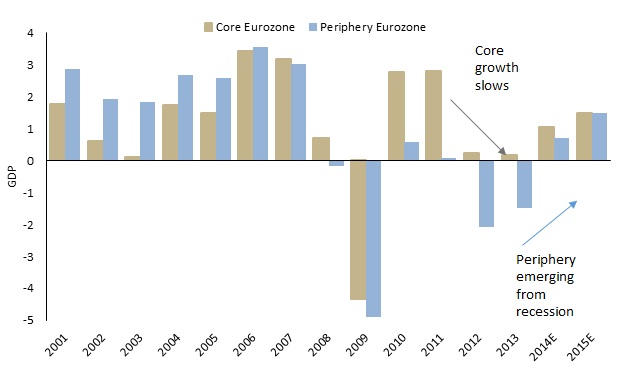 Moreover, with the oil price having halved since the summer, the Euro heading toward dollar parity and Eurozone bank lending finally picking up after 6 years of balance sheet deleveraging, robust economic growth should return to all parts of Europe, even dare we predict, Italy in 2015. In the absence of a significantly negative credit event, we would expect the European economy to regain momentum over the coming months given these significant tail-winds. In addition, falling headline inflation (a result of lower energy prices) is not a symptom in 2015 of a “deflationary” bust but an over-supply of energy following more than a decade long boom, which affords the ECB greater leeway for commencing sovereign QE – in addition to the more targeted private sector asset purchases already announced - should this be necessary. Should fears of “Grexit” spill over to the rest of the Eurozone – which we consider unlikely – this is more likely to trigger larger scale sovereign QE from the ECB.7 So whilst headline risk from Greece and the political difficulties in implementing the “Grecian 2015” solution will likely lead to further volatility, this should create opportunities for investors in the weeks ahead.

1 Rass for Eleftheros Typos newspaper, January 5th 2015.
2 Hellenic Republic Debt Bulletin, 75, September 2014.
3 UBS, January 2015.
4 PASOK, Golden Dawn (XA (far right)), Communists (KKE) and POTAMI (centre left) are all currently polling over 3%, with Independent Greeks (AN.EL((far right)) and Democratic Left just under. The undecided vote is around 15%.
5 See Morgan Stanley, “Greece: Back to the Old Days?”, December 30th 2014.
6 See Morgan Stanley which estimates a 5% recovery value in the event of a Grexit vs 50-80% in soft-OSI.
7 Contrary to some newspaper reports it is entirely feasible that ECB Sovereign QE is conditional on the assets purchased being investment grade (which currently Greece and Cyprus are not) or in a Troika programme.