The Brent oil price is now below $80.1 Much of the debate has centred on whether this is being caused by a weak demand environment given the recent macro-economic concerns or due to a rise in supply. Whilst global demand is expected to rise just 0.7% this year (below the 20 year average of 1.6% per annum), supply is already up 2.7%2. In our view it is this growth in supply that is the primary cause of the weakness in the oil price, and therefore understanding the sustainability of this supply is crucial. For if sustainable (all things being equal), it would mean a lower oil price environment is not just an aberration. Such a scenario could significantly change the growth outlook for Europe’s economy and corporate profits.

The recent growth in global supply is not to be underestimated. Indeed, the 2.7% increase as at the end of September this year represents the largest percentage increase for ten years.2 Amazingly 70% of this growth is coming from the US which has grown its oil production by on average 14.1% per annum over the last three years - making it today the world’s largest oil producer (if one includes natural gas liquids or so called NGL’s).2 Chart 1 below shows the global supply and demand balance over the last three years. 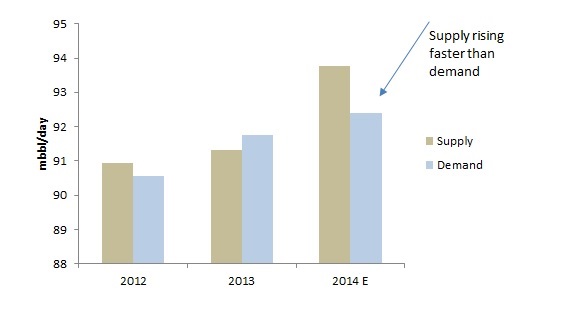 The recent increase in supply is clear. While growth in demand has indeed slowed, the supply increase has been powerful. Chart 2 below shows the cumulative growth in world oil supply since 2012 and the relative contribution of the three largest producers.

From the chart it is clear how influential US supply has been, contributing 3.9m bbl/day of the total 5.3m bbl/day cumulative increase in global supply over the last three years.2 This compares to the cumulative 3.8m bbl/day increase in global demand over the same period.2 The principal reason for this US growth has been the explosion in shale oil production, and therefore understanding the sustainability of this supply is crucial.

The production of shale oil has a higher cost curve due principally to the high decline rates of the wells. Estimated at 30% per annum (ie: oil reservoir is 90% depleted within three years), this is five times that of an average conventional oil well.4 Meaning that to keep producing, operators need to keep drilling new wells. This is an expensive undertaking and results in higher operating costs due to this capital intensity. And it is this high cost nature of production that oil bulls cling to in the hope that shale oil production will collapse at lower prices. 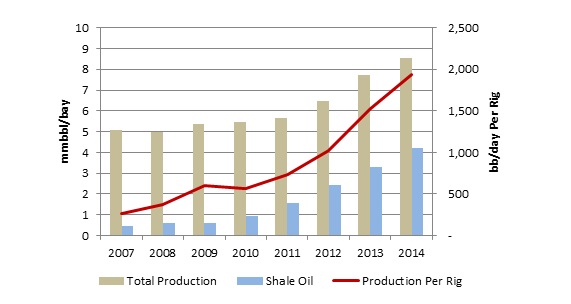 However Chart 3 above highlights an interesting counter point about drilling productivity (as measured by daily production per rig) within the US shale oil formations. Quite clearly this has increased significantly over the last five years and at an accelerating rate too. Whilst at the end of 2010 the average rig produced just 561bbl/day, today it produces over 1,900bbl/day – a more than three-fold increase in productivity.3 Within this, the two largest producing shale formations (Bakken and Eagle Ford ), which collectively account for the majority of US shale oil production and growth, have seen their productivity rise from an average of 171bbl/day at the end of 2010 to 547bbl/day today.3 Crucially this has meant that the total number of rigs working today is similar to that three ago.

Perhaps this rise in productivity is one of the main reasons for oil and gas consultants Rystad Energy having estimated that both the Eagle Ford and Bakken formations have a breakeven WTI price of under $50/bbl – considerably lower than today’s price. In fact they go further still and suggest that overall current US shale oil production levels can be maintained with a Brent price between $60-$65/bbl.5 This may seem surprisingly low relative to the $65 - $80 range cited in many press and analytical reports as the shale oil break-even price.5 However it is vital to understand that the break-even prices mentioned are more likely than not based on project profitability break-even, whereas cash costs could well be more than $10/bbl lower.6 So whilst lower prices will undoubtedly see a reduction in drilling activity this will probably be focused in noncore areas and mature shale oil basins. In other words, marginal areas which will not have a significant effect on total supply.

Whilst the US has indeed been the largest source of global supply growth it is also important to step back and consider global oil supply more generally, and more specifically the costs thereof as oil bulls routinely cite high costs as a rationale for high prices. However after a decade of massive capex investment, there is a significant “installed base” of oil production globally which faces only opex costs as capital costs are already sunk. Indeed it costs the world’s 24 largest integrated oil companies just $15 to produce one incremental barrel of oil.6 Whilst recognising this is a global average and that costs will differ depending on many factors for each individual oil field, this remains a powerful reminder that the marginal cost of producing a barrel of oil globally remains a lot lower than current prices. In fact a lower oil price doesn’t so much affect current production so much as future production via reduced capex and investment plans. The impact of this reduction in capex is already manifesting itself through emerging excess capacity in the service industry, which in turn is putting downside pressure on service costs - further lowering production costs.

Of course none of this may be relevant if OPEC (Saudi Arabia in particular) announce a cut in production to protect prices - and adhere to it. However, this may be less likely than many people expect, as although $90-$100/bbl is the reported price level required for Saudi Arabia to be fiscally balanced, it is simplistic to conclude that they will therefore defend this price band, particularly as it is believed only two thirds of their budget is spent on operating costs (the balance being spent on investments).7 Indeed there is no reason why they can’t run a budget deficit either (as indeed many countries do). In fact their finances are in such good shape with little debt and an oil fund close to $800bln (roughly the same size as their GDP), that it has been estimated that they could withstand an $80/bbl oil price for at least the next five years.7 Nonetheless, at the very least, OPEC may demand stricter adherence from its members to the current 30m bbl/day quota. This would mean a cut of 700k bbl/day (as at the end of September OPEC was producing at a rate of 30.7m bbl/day1) – still not enough to match the 1m bbl/day rise in US shale oil production so far this year.2

Some argue though that the cure for low oil prices is low oil prices themselves – meaning demand will ramp up and lift prices with it. However there is evidence to suggest that the demand elasticity for oil is more asymmetric ie: oil price increases have a larger impact on demand than oil price decreases. Are you going to suddenly drive around more now that fuel prices are lower? Unlikely.  It is more likely that your disposable income will rise. And it is this element and its effect primarily on consumption which is crucial to the outlook for European growth, as private household consumption represents almost 60% of Eurozone GDP.8

Back in 2010 the ECB conducted a study on the effect of a sustained 10% rise in the price of oil on Euro area GDP growth over a three year period (there has not been one done on the effect of a fall in prices). They concluded that such a move would have a cumulative impact of 0.25% on real GDP growth (the greatest impact being seen within the first two years), primarily witnessed through real income effects, and more specifically private consumption.9 Of course the current move in the oil price is greater than 20%, meaning simplistically that real GDP growth could see a boost of 0.5% over three years. Against expectations of 1.1% Eurozone GDP growth next year, this represents a very material tailwind.

Naturally though, the falling oil price will also negatively affect inflation. Here the ECB reckon that a sustained 10% oil price move will shift CPI by up to 0.3%.9 Thus if the current 20% fall is sustained it could mean a 0.6% fall in CPI - bringing the deflation debate front and centre. However we would strongly argue that deflation due to supply-side effects is a positive rather than a negative. Of course, such a hit to CPI will undoubtedly pressure the ECB into further QE-type action which could continue to weaken the Euro – a further stimulus to the European economy.

Overall, a sustained lower oil price is good news for Europe and its consumer driven economy. The potential for this scenario hinges to a large extent on global supply and in particular the sustainability of US shale oil production. Evidence suggests supply is sustainable at current prices and theoretically even lower levels. This means that the recent fall in price of oil could represent a step change in the price level, which in turn should provide a welcome boost to European economic growth.

‘Yellen and the Coup de Grace for Commodities’