Banco Espirito Santo (BES) has historically been controlled by the eponymous and historically influential Portuguese family through a leveraged and complex shareholding structure of holding companies. The company with direct ownership of BES (aka “the bank”) equity, the Espirito Financial Group (ESFG - Portugal) currently owns 20% (down from 27% a few months ago).1 However, stripping out minority shareholdings in the holding companies, the underlying economic ownership of the Espirito family in the bank is just 5.5%.2 Never did such a small shareholder wreak such havoc on its investment.

The root cause of the current instability around Banco Espirito Santo is inappropriate leverage of the family shareholder within no fewer than six different family controlled holding companies (see Fig 1.) that either have not published audited accounts or have been subject to accounting irregularities.3 Although still not fully disclosed (!) the amount of debt in these holding companies has been reported in the Portuguese press at a staggering €8bn.4 The only tradable debt is €934m5 of bonds issued by the Espirito Financial Group, prices of which have collapsed in recent weeks. However, of the other holding companies, Rioforte is thought to have issued €3.1bn of corporate paper and ES International €4.2bn.6 Press reports suggest both ES International and Rioforte are close to filing for bankruptcy.7 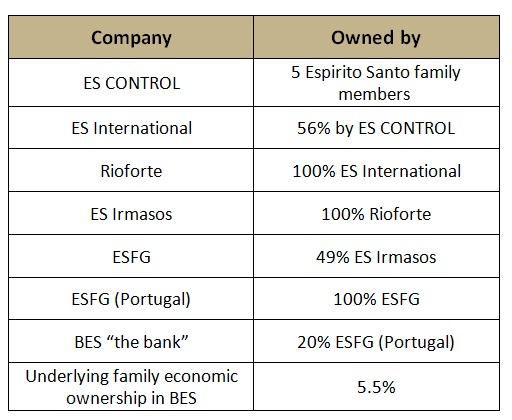 Who owns this debt? Banco Espirito Santo “the bank” has disclosed direct exposure of €1.2bn9 to the holding company debt (and somewhat belatedly pledged not to increase this exposure). Portugal Telecom has owned up to €900m10 of corporate paper, leaving €6bn11 in the hands of retail, institutional and corporate clients (and counterparties) of the Espirito Santo group, some of which was sold with guarantees from other holding company entities, which are now presumably meaningless. There is therefore scope for the potential losses at the bank to be considerably higher should the bank be subject to lawsuits for selling the debt to its retail clients and an obvious loss of trust from its clients which will impact on future business. Although by no means an exclusively Portuguese investor base,12 the impact on the real economy in Portugal (GDP €168bn13) of this likely capital loss is as yet unquantifiable, but it is certainly not positive.

The bank also has serious problems in its Angolan operations, which would appear to have made loans to crony Angolan government officials that were previously subject to a guarantee by the Angolan government covering 70% of the €6bn loan book which is soon due to expire.14 As there is a high degree of scepticism as to whether the loans will ever be repaid, the base case scenario is that the bank is nationalised by the Angolan government (who are thought to have close links with the minority shareholders in the Angolan operations) with a write-down of the €660m of BES equity in return for the €3.1bn of intra-company funding from Portugal being repaid.15 It is also thought that some of the crony Angolan officials (or Army generals) were lucky enough to be minority shareholders in the Espirito Santo family holding companies.

Where does this leave the solvency of the bank (as opposed to the family holding companies)? Banco Espirito Santo recently raised €1bn in a rights issue and currently has €6.7bn of tangible equity (compared to €60bn of risk weighted assets: a Tier 1 ratio of 11%16). If we subtract the €1.2bn of direct exposure to the holding company debt and €660m of Angolan equity, this leaves tangible equity of €4.9bn, but with the deduction of Angolan assets still a likely Tier 1 ratio of 9%.17 However, it would probably be prudent to suspect that the ultimate write-downs on holding company debt will be greater than the direct exposure disclosed and that the Angolan inter-company loan will not be repaid imminently. Moreover, the bigger picture requires a solution that will quickly restore the trust of financial markets and the bank’s customers.

Press reports today suggest that the bank is planning a €2bn+ capital increase with 1-2 new strategic investors.18 We are sceptical and would be surprised if there is appetite amongst equity investors for an additional rights issue within a realistic timeframe. Therefore the most credible solution would likely be  part-nationalisation, with the Portuguese government issuing new preference share capital and the Espirito Santo family severing all ties with the bank. This would most probably see a “bail-in” of all existing bank shareholders and perhaps also subordinated debt holders (around €1bn19 outstanding).  Given that the Portuguese government still has €6bn of funds from the Troika (EU/IMF/ECB) for bank recapitalisation (and is also about to receive €2bn from the repayment of the BCP Co-Co20) there should be few doubts about Portugal’s ability to comfortably fund a bail-out, meaning that risks of a further sovereign debt crisis look farfetched.

Although the perpetual bears of Europe and its banking system have needed little encouragement to conclude that the BES situation is symptomatic of a wider malaise, the cause of the BES crisis has been poor corporate governance and inappropriate supervision of leverage at the family holding company level. It is likely that the Troika reviews and the current ECB’s Asset Quality Review (AQR) were the catalysts for the degree of leverage at the holding company level being uncovered. Failure to uncover any irregularities in the Eurozone banking system might have been more disturbing.

There are clearly a range of possible outcomes but the most likely end-game in our opinion will see the bank part-nationalised, which the Portuguese government in our opinion would be capable of comfortably funding. Aside to the risk to the holding company debt-holders, BES shareholders, and BES subordinated debt holders (in that order) there is also a short-term risk to the Portuguese economy (which had been showing promising growth) particularly without more decisive action from the Portuguese authorities. However, although the default of the holding company debt is likely to be the biggest Portuguese bankruptcy in its history, the sums involved are small in a European context and therefore the situation would have to be incredibly badly managed for the fall-out to stall the European economy as a whole. Moreover, any credible reporting (or analysis) of the BES situation needs to distinguish between the fall-out from the likely default of holding company debt with the uncertainty but likely manageable solvency issues this has created for BES (the bank).

We currently have no long positions in Portugal, having sold out of our position in Portuguese bank BCP over the past few weeks precisely because we have been concerned about the fall-out from the BES saga infecting an otherwise compelling BCP story.  Assuming competent management of the crisis, however, the story of BES is likely to be that of idiosyncratic rather than systematic risk and how a small but powerful shareholder can destabilise a bank and an economy: O Pai (de divida), o Filho (de passivo) e do Espirito Santo.

The above statements are solely the opinion of Argonaut Capital Partners and do not constitute investment advice.

Argonaut Capital Partners LLP is authorised and regulated in the UK by the Financial Conduct Authority (FCA), FCA Reg. No.: 433809, Registered office: 4th Floor, 115 George Street, Edinburgh, EH2 4JN. Co. Reg. No.: SO300614. This document has been provided for informational purposes only. It does not constitute investment advice. This document is for professional clients & eligible counterparties only as defined by the FCA, with the experience, knowledge & expertise to make educated investment decisions and understand the associated risks. The document therefore should not be relied upon by retail clients. Information and opinions expressed in this material are subject to change without notice. They have been obtained or derived from sources believed by Argonaut Capital Partners LLP to be reliable but Argonaut Capital Partners LLP make no representation as to their accuracy or completeness. Fund Partners Limited (formerly IFDS Managers Limited) is the Authorised Corporate Director (ACD) of FP Argonaut Funds and is authorised and regulated by the FCA. Registered office: Cedar House, 3 Cedar Park, Cobham Road, Dorset, BH21 7SB.