‘A dislocation between earnings and price’

April and May witnessed a significant rotation within the European markets, away from cyclicals and into defensives. We argued in our blog last month (“Market volatility and the proverbial gift horse”, April 2014) that we believed there was nothing fundamental behind this and indeed it offered investors a prime opportunity to buy into those areas of the market which are continuing to see earnings upgrades, specifically the domestic cyclical names whose fortunes are closely tied to that of Europe’s economy. Nothing in April or May has changed this. In fact Europe’s economy is continuing its resilient recovery as indicated by the recent Markit Eurozone Composite PMI released in late May which noted that Europe was currently seeing its best period of growth for the last three years. Added to this, the ECB has been vocal about its willingness to act to ensure Europe’s continued economic momentum.

All this has meant that European cyclical stocks have been seeing significant earnings upgrades, whilst those of the defensive stocks have not. Chart 1 below shows the 12 month forward earnings expectations for European cyclical and defensive stocks since the end of 2012. We have overlaid this with the Markit Eurozone Composite PMI, brought forward by three months. What is clear from the chart is that once the PMI breached the expansionary 50 level, unsurprisingly the earnings momentum for Europe’s cyclical sectors accelerated and outpaced that of defensives. In fact, the earnings estimates for cyclical stocks have been upgraded by 12% versus just 0.5% for defensives since the end of 2012. 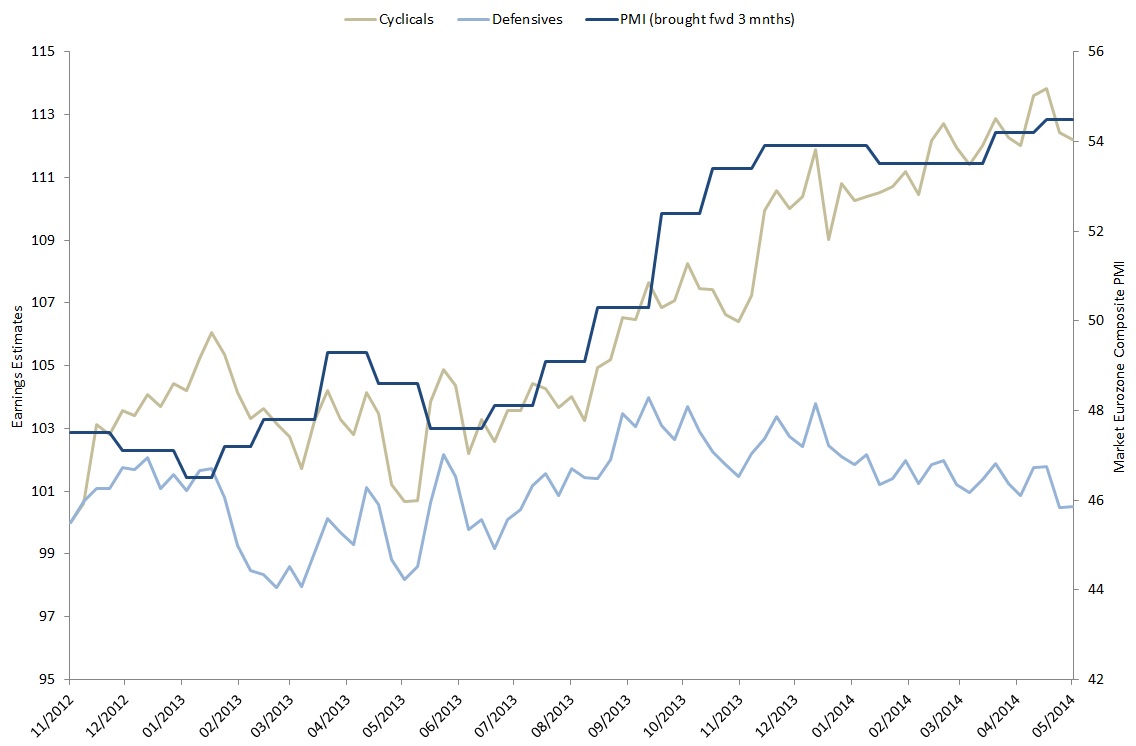 Taking a closer look at the period since Q4 2013 (approximately three months lag from the PMI reading crossing into expansionary territory in June 2013), reveals that the cyclical areas of the market have seen their earnings upgraded by 5%, whereas those for defensives have actually been downgraded by 2.5%. This represents an almost 800bps difference in earnings revisions between the two sectors (illustrated in Chart 2 below).  In fact, even since the beginning of April this year (when the internal rotation began in earnest), earnings for cyclical companies have been upgraded, whereas those for defensives have been downgraded. This is precisely because, despite overall Q1 results for the market being uninspiring, the results and the outlook for cyclicals were better than those for defensives. 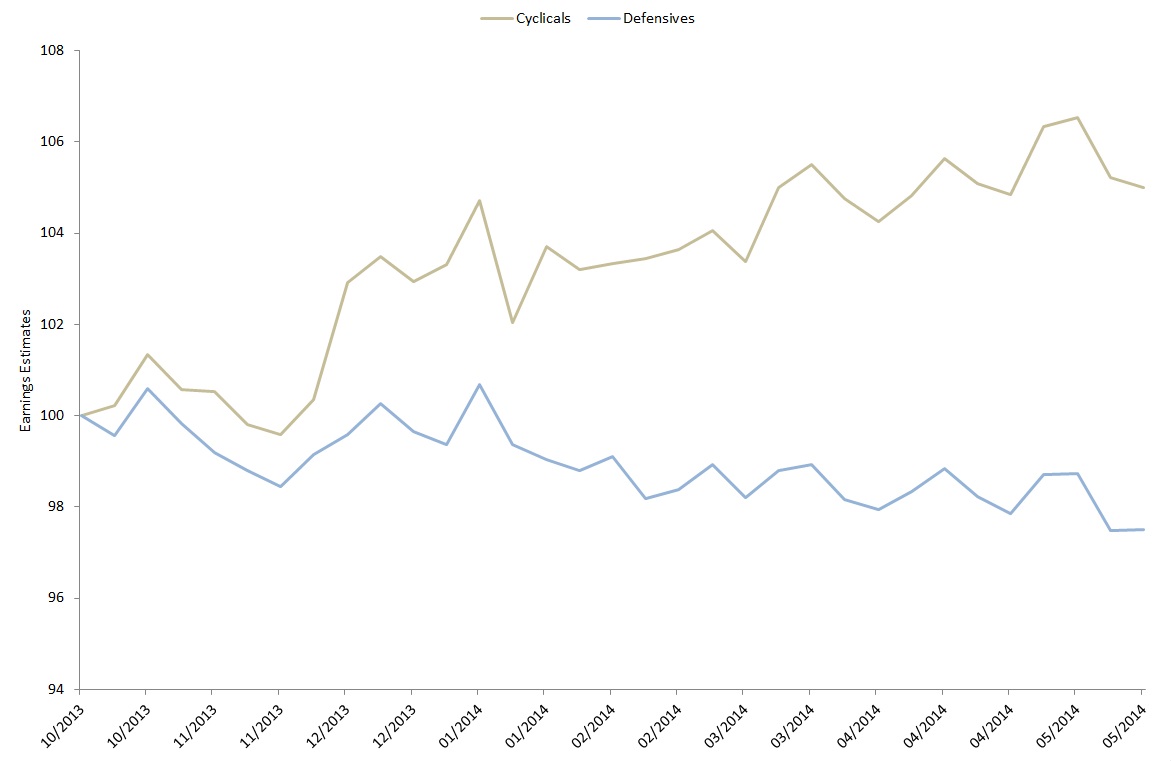 Perhaps unsurprisingly this discrepancy between cyclicals and defensives is mirrored when looking at European companies from the angle of domestic versus international i.e. where they generate the majority of their earnings. Year to date earnings estimates for domestically focussed companies have been upgraded by 3%, while those of internationally focussed companies have been downgraded by 1% (this illustrated below in Chart 3). 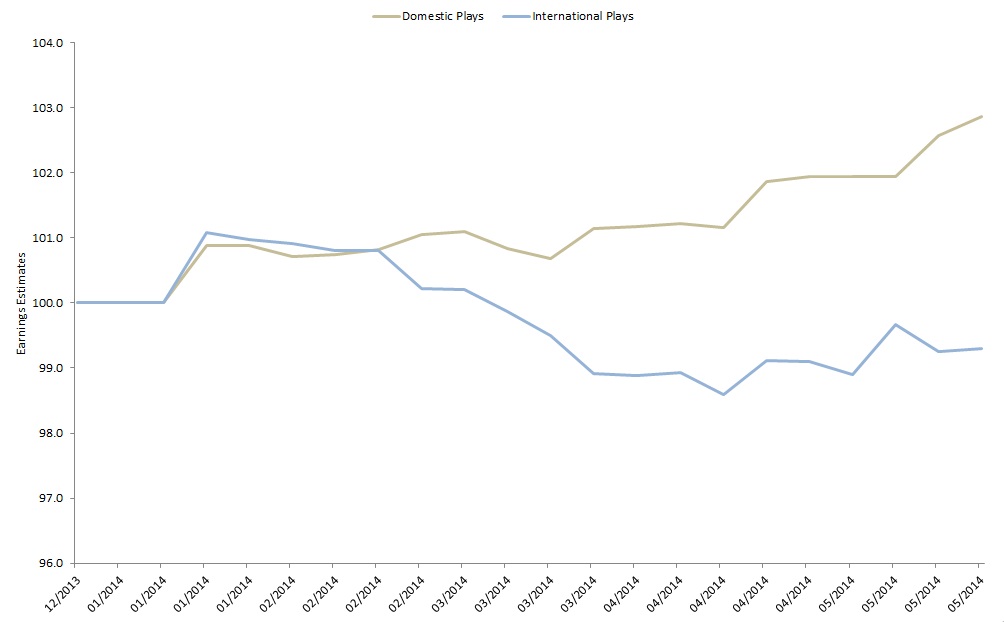 Granted the Euro has been a headwind for international companies, but we believe these upgrades also meaningfully reflect the underlying positive outlook for Europe’s domestic economy, specifically relative to that of emerging markets.

The question to be asked then is why did cyclicals underperform in such a manner, when clearly the environment is conducive to their earnings outlook? We believe it is probably due to technical factors. Indeed, the appetite for European equities has increased since Q2 2013 with a net $31.5bln being invested by European investors into the market (following $19.7bln of outflows in Q2 2013).2 The devil is in the detail though as although April saw $9.4bln of inflows (a positive read through for the overall European outlook), 67% of this money went to ETF’s.2 Unsurprisingly these products are heavily skewed to large cap stocks, a significant number of which are defensive names. Lastly there is also the influence of hedge funds and their positioning. Indeed it would seem the European focussed hedge fund community reduced their net long exposure from about 65% to 35%, clearly weighing further on mid cap active bets in long books as well as squeezing index short positions.3

Argonaut Capital Partners LLP is authorised and regulated in the UK by the Financial Conduct Authority (FCA), FCA Reg. No.: 433809, Registered office: 4th Floor, 115 George Street, Edinburgh, EH2 4JN. Co. Reg. No.: SO300614. This document has been provided for informational purposes only. It does not constitute investment advice. This document is for professional clients & eligible counterparties only as defined by the FCA, with the experience, knowledge & expertise to make educated investment decisions and understand the associated risks. The document therefore should not be relied upon by retail clients. Information and opinions expressed in this material are subject to change without notice. They have been obtained or derived from sources believed by Argonaut Capital Partners LLP to be reliable but Argonaut Capital Partners LLP make no representation as to their accuracy or completeness. Fund Partners Limited (formerly IFDS Managers Limited) is the Authorised Corporate Director (ACD) of IM Argonaut Funds and is authorised and regulated by the FCA. Registered office: Cedar House, 3 Cedar Park, Cobham Road, Dorset, BH21 7SB.