Over the last few months we have written extensively about our belief in, and the evidence for, Europe’s economic recovery, in particular the dramatic improvement in the outlook for the peripheral countries (Europe’s economy: the last great recovery trade and PIIGS can fly). Although there is a legitimate debate over the strength and duration of the recovery, its existence has become difficult to deny. For market commentators for whom warning about the dangers of investing in Europe has become ingrained, this has inspired a new alternative bearish narrative, the mention of which is supposed to send shivers down the spines of erudite investors and provide fresh inspiration for a new generation of savers to stuff their hard-earned cash under their mattresses. Like Lord Voldemort to Hogwarts, HE-WHO-MUST-NOT-BE-NAMED has returned. Whisper it gently, DEFLATION is back!

We should first point out that there is currently no deflation in Europe. The latest Eurozone Consumer Price Index (CPI), released last Friday measured an annual increase in consumer prices of +0.8%. There is, however, “disinflation” (a fall in the rate of inflation, as opposed to a negative inflation rate). Since 1990 there have been many periods of disinflation. During the 1990’s Europe enjoyed a decade of disinflation, with the inflation rate steadily falling from 3.9% at the beginning of 1991 to 1.8% by the end of 1999. In fact at the end of 1998, the inflation rate fell to 0.8% - exactly the same as today’s rate1. Crucially, during this decade European GDP growth averaged 2.1% per annum, leading to aggregate corporate profits growing by close to 50% and equity markets producing stellar returns of close to 200%2. Over this twenty three year period since 1990, the Producer Price Index (PPI) also fell into negative territory several times, but only once did it result in deflation, in 2009. Thus the fact that PPI is today negative does not automatically mean the inflation rate will turn negative (deflation). Indeed in an environment of improving economic growth, a falling inflation rate is in fact desirable. 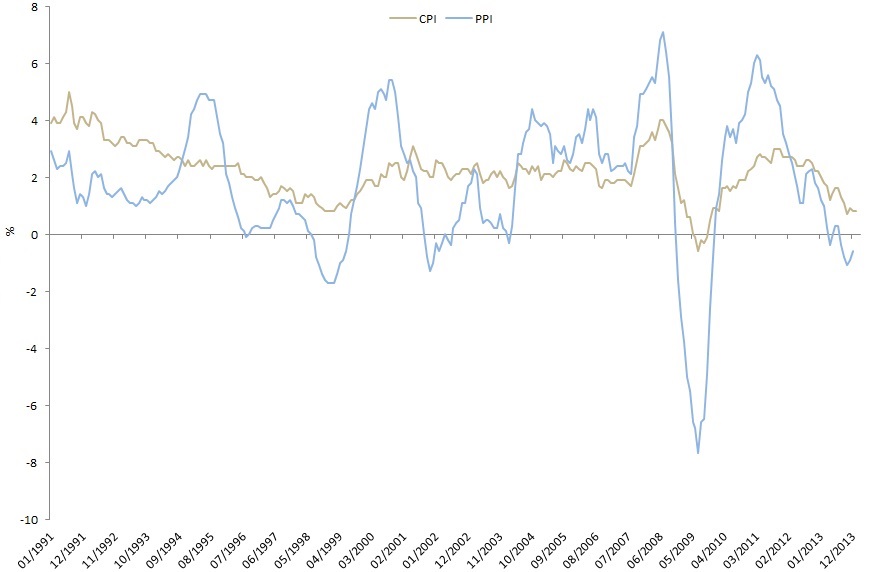 The question of why prices are falling is crucial. “Good” deflation is generally caused by a supply shock due to such things as major new innovations (railways, computers, internet etc.) which bring down costs while opening up new markets. This productivity-driven deflation was common during the last part of the 19th century in America, and indeed coincided with a period of rapid economic growth. On the other hand “bad” deflation is associated with a demand shock where demand collapses. Inflation and deflation are simply the multiplier of real to nominal economic growth, but it is nominal economic growth which is the important number for economies. As such the inflation/deflation debate is somewhat irrelevant.

Today, Europe’s economy is improving and growing. Indeed leading indicators such as the manufacturing Purchasing Managers Index (PMI) not only support this but imply further expansion. This divergence with inflation falling, while leading economic indicators are rising is highlighted in the chart below. It is perhaps no coincidence that since the manufacturing PMI indicator began rising in from December 2011, the MSCI European ex UK index has returned 53% to date (in Euro's), while the inflation rate has declined from 2.8% to 0.8%1. Nominal economic growth and corporate profits are what are important for equities. 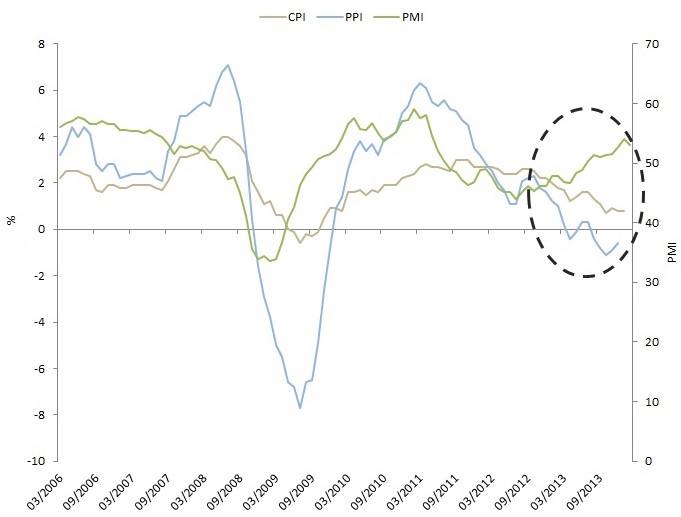 The disinflationary environment has been acutely focused in the periphery, and may merely be a reflection of southern Europe’s increasing competitiveness after a period of painful internal devaluation (lower wages, lower public spending, lower house prices, fewer imports) due to the prolonged recessionary environment. Indeed the only country to have actually experienced deflation for more than one month is Greece (inflation turned negative in March 2013). This was in fact a necessary evil in order for their economy to regain competitiveness in the absence of having their own currency to deflate. In addition, lower inflation in northern Europe may just be a reflection of declining commodity prices or the rise in the Euro. All told though, these factors would point to an enhanced level of prospective corporate profitability under more benign economic conditions – conditions currently evolving in Europe.

It is also why the talk of deflation is obscuring income orientated investors from grasping an opportunity seldom seen, with the dividend yield on equities still greater than that offered by both government and corporate bonds, despite the rise in stock markets over the last 18 months. While the yield on equities first crossed government bond yields in late 2008, it wasn’t until late 2011 that they rose above that of corporate bonds. In fact, at the start of this year 42% of European companies had a dividend yield greater than that of corporate bonds. This compares to an average of just 15% of companies over the last fifteen years3. 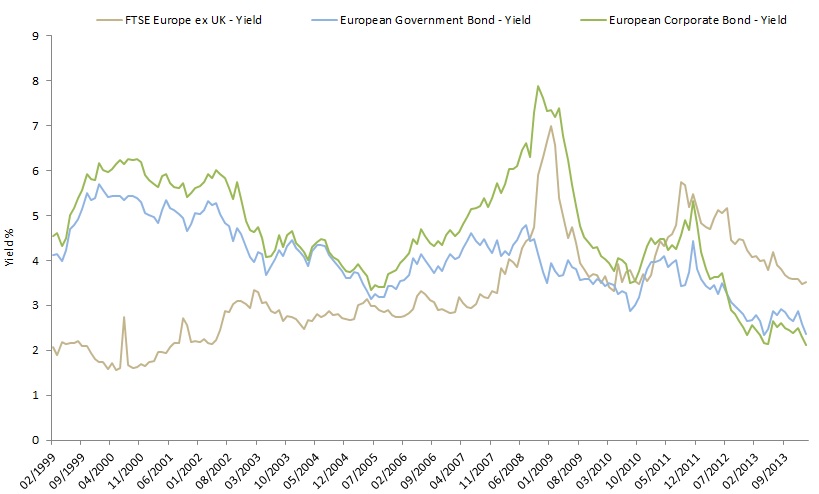 What’s more, equities offer income investors the one thing that bonds don’t – exposure to growth. Dividends are a function of earnings and as earnings rise, so too do dividends. This year dividends in Europe are expected to grow by 8% as a direct result of earnings being expected to rise by 13%4. Indeed following three years of double-digit earnings downgrades for the market, this year is the first year where earnings expectations have been upgraded and where in our opinion forecasts of profit growth are credible.

Europe’s economic growth is improving, inflation is falling and earnings are rising. Scare stories over a non-existent deflationary demon which in any case is largely irrelevant to economic growth, corporate profits and stock market returns, are in our opinion, an unhelpful distraction to the main stock market opportunity.

This document has been provided for informational purposes only solely for Professional Clients as defined by the FCA and does not constitute investment advice. Information and opinions expressed in this material are subject to change without notice and to the best of Argonauts knowledge are correct at the date of producing the document. They have been obtained or derived from sources believed by Argonaut Capital Partners LLP to be reliable but Argonaut Capital Partners LLP make no representation as to their accuracy or completeness. The writer of this piece may have conflicts of interest as may have personal holdings in the companies mentioned.