With the Greek economy having regained its lost competitiveness upon joining the Euro; its current and fiscal account now in surplus and its government debt restructured; we think the emergence of Greece from recession should soon be officially confirmed. In view of Greece’s position at the epicentre of Eurozone stress, the Grecovery is likely to be the most important European economic and political event of 2014.

The Greek economy has had six years of recession, with real GDP having contracted 26% from its peak of €233bn in 20081.  Unemployment has now stabilised at 27% (from 10% in 2008) with wages for those employed down around 25% on average2. This painful internal devaluation has however resulted in Greece regaining all of its lost competitiveness since joining the Euro in 2000 (see Chart 1) with its current account moving from a deficit of 13% in 2008 to a surplus of 1% today3 and exports rising from 19% to 27% of GDP4. Foreign capital is returning to Greece with over €1bn of announced foreign direct investment or privatisations in the last month alone5. The Greek economy has actually been expanding on a quarter-on-quarter basis since Q2 20136 and the return to year-on-year growth is likely to be confirmed early in 2014 with the IMF officially forecasting a +0.6% increase 2014 on 20137 . 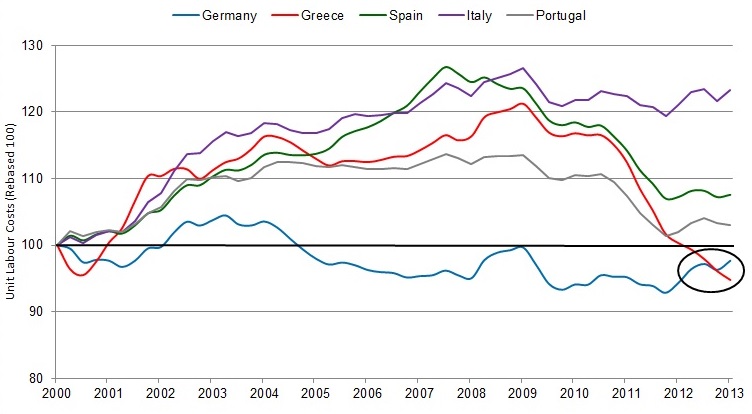 Greek government debt of €322bn9 would still appear to be unsustainably high in proportion to its economy (€184bn) at 175% of GDP10, particularly with the yield on the Greek 10 year government bond at 8% (although this yield is down significantly from its peak of 31% in 201111). However, this privately held tradable debt only accounts for 17% of Greek government debt, with the rest in the hands of the IMF, EU and Eurozone12 central banks charging only a nominal rate of interest. In fact, the true debt servicing cost to the Greek government is just 2.3%13 and the average duration 16 years14. This makes Greece’s debt burden much more sustainable (€7.5bn in interest per annum rather than €26bn at the implied 8% rate) than headline figures suggest. In addition, Greece now has a primary surplus (fiscal balance before interest payments) of 1% of GDP (€2bn) from a deficit of 11% in 200915 along with an ambitious €22bn privatisation programme16. This is a remarkable fiscal adjustment. It is also probable that the EU creditors reward Greece for its economic progress through further reductions in interest payments or extensions in maturities of loans. In other words the equitisation of Greece’s publicly held debt replaces the need for default or further haircuts on privately held debt. This should lead to the Greek government regaining access to capital markets and financial markets regaining confidence in the country.

The Eurozone periphery is slowly emerging from recession: economic activity in Ireland, Portugal and Spain is now expanding again18; recovery in Italy and Greece should follow. However, it is Greece’s emergence from recession that is the most symbolic. Greece has been the epicentre of concerns over the Euro. It is hard to avoid the conclusion that if Greece was ever going to leave the Euro then this event would have already occurred. That Greece has achieved the rebalancing of its economy through a slow painful internal devaluation - rather than a quick external currency devaluation - will be seen by all but the most ardent anti-Euro ideologues as a validation of the Euro as an (albeit imperfect) political and economic project19 . As such it should lead to greater confidence from financial markets and business leaders in the economic prospects of the continent as a whole.

This document has been provided for informational purposes only solely for Professional Clients as defined by the FCA and does not constitute investment advice. Information and opinions expressed in this material are subject to change without notice and to the best of Argonauts knowledge are correct at the date of producing the document. They have been obtained or derived from sources believed by Argonaut Capital Partners LLP to be reliable but Argonaut Capital Partners LLP make no representation as to their accuracy or completeness . The writer of this piece may have conflicts of interest as may have personal holdings in the companies mentioned.