For much of the last five years it has been possible to be bullish on European equities without necessarily having the same enthusiasm about the European economy. We think that this narrative has now exhausted itself: extrapolation of emerging market demand is risky; the merits of quality companies able to compound their profits in an anaemic economic growth environment well recognised. With the European economy finally emerging from its double-dip recession we believe that the main opportunity in European stock markets now lies in domestic cyclicals; companies which have had to run very fast in terms of cost cutting and restructuring often just to stand still over recent years; where profitability has remained depressed but where there is now significant bounce-back potential.  We are also genuinely enthused for the first time in half a decade by the potential for positive earnings surprise amongst a select number of stocks in the banking sector.

We wrote in a recent blog “Dirty Thirty” not “Nifty Fifty” that corporate Europe was still “under-earning” relative to previous economic cycles and particularly when compared to the peak of the previous cycle in 2007. We also noted that a sustained economic recovery in Europe’s economy would see a rebound in the profitability in domestically exposed stocks where earnings were still cyclically depressed as opposed to stocks exposed to the global economy. If we examine those sectors most exposed to the domestic European economy (Table 1) we can see that whilst market return on equity (ROE) in 2013 is forecast to recover back to 69% of its 2007 peak, Insurance, Telecom and Real Estate sectors ROE are already estimated to be close to their previous peak. By contrast Diversified Financials and Bank sector profitability is still forecast to be the most depressed at just 41% and 43% of the 2007 ROE. Whilst this is not in itself an argument that Bank ROE’s will inevitably recover or that the 2007 ROE is an achievable level of future profitability, it highlights that it is difficult to argue for a rebound in the overall level of profitability in corporate Europe without believing that those sectors where profitability has fallen the most have superior potential to recover relative to those sectors where profitability has either already recovered or is at new highs.

For much of the past five years we have been consistent – but never dogmatic - in our negative views on the European banking sector. Our view has been that the anaemic European growth environment would see provisions for bad loans remain stubbornly high for longer than analyst forecasts predicted; that the process of balance sheet repair would dilute shareholder earnings and see revenues fall but was necessary for banks to re-establish their funding competitive advantage versus the non-financial sector; and that a zero interest rate environment whilst very necessary for any economic recovery would result in on-going pressure on margins. As a result the sector would continue to see earnings downgrades (and inferior earnings momentum to the overall market as seen in Chart 1) which combined with leveraged balance sheets meant that confidently ascribing the concept of value to bank equity would remain difficult. When the facts changed – and crucially we could find stocks with the potential for earnings upgrades – we would change our minds. 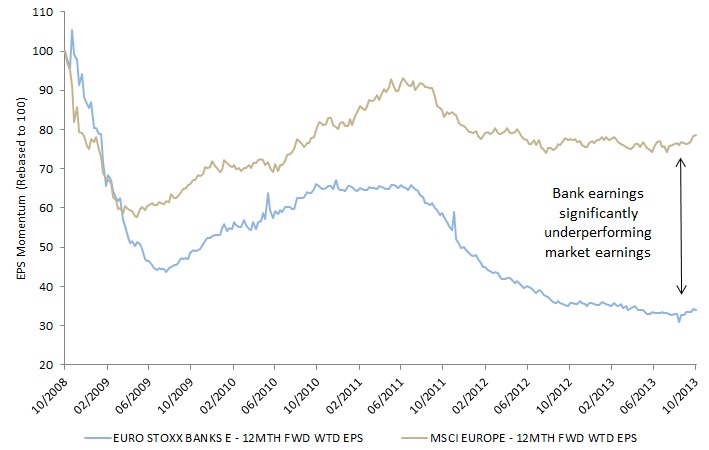 As we identified in a previous blog “Banks: Europe’s highest growth sector?” a normalisation in provision charges would be the main source of earnings growth potential in the sector, given that in 2012 bad loan charges consumed 53% of all bank operating profit in the pan-European sector and a staggering 74% amongst Euro-zone banks. Although recent European macro data has been encouraging, we also recognise that the likely improvement in European economic growth – the prerequisite for provision charges normalising - is not likely to be huge, will vary from country to country and is by no means guaranteed. Banks exposed to economies where economic activity has been depressed but is now potentially fast recovering will see the inflection point in provisions quicker (e.g.  RBS to UK, KBC and RBS to Ireland). Banks such as Italy’s Intesa and Denmark’s Jyske that have been prudent in their charges for bad loans as seen through their ratio of provisions to non-performing loans and their classification of a non-performing loan will see the benefits of improving asset quality in their bottom-line sooner than peers. We are also wary of banks which have been over-earning in recent years from their emerging market exposure (Santander, BBVA) where any leverage to a European recovery may be more muted.

Whilst the banking industry rarely experiences disruptive new entrants it is also fair to observe that too few banks are able to point to any discernible competitive advantage or have demonstrated sufficient discipline in capital allocation. We admire banks such as UBS that have refocused on core activities; exiting assets in which there is not sufficient profit margin to compensate for either the amount of capital committed or the potential for capital loss. We despair at banks (all of the French, Barclays, Deutsche) that have made no attempt to learn the lessons of the financial crisis:  whose one trick is an endless balance sheet expansion funded by long-suffering shareholders. If return on equity cannot be improved through an increase in leverage or an increase in pricing power then exiting highly capital intensive, high risk and low margin activities is crucial.

There will be many opportunities for banks that either already have excess capital or have sufficient organic capital generation to redeploy surplus capital at attractive rates of return, particularly if economic growth and the interest rate cycle continues to normalise. Lloyds in the UK and Intesa will have significant opportunities to re-lever their strong balance sheets and dominant retail market share when domestic demand eventually picks up. Jyske has a fantastic opportunity to consolidate the Danish market through the purchase of smaller rivals unable to adequately fund themselves. It may come as a disappointment to some but European economic growth and interest rates will eventually normalise and bank profits will be the beneficiary.  The sole remaining recovery trade from the financial crisis – leverage to Europe’s economy - is now the main stock market opportunity.

This document has been provided for informational purposes only solely for Professional Clients as defined by the FCA and does not constitute investment advice. Information and opinions expressed in this material are subject to change without notice and to the best of Argonaut’s knowledge are correct at the date of producing the document. They have been obtained or derived from sources believed by Argonaut Capital Partners LLP to be reliable but Argonaut Capital Partners LLP make no representation as to their accuracy or completeness. The writer of this piece may have conflicts of interest as he may have personal holdings in the companies mentioned.