For the past three years there has been little economic or corporate profit growth in Europe. Only above average companies able to leverage their competitive advantages have been able to increase their profits. Given that equity valuations are very sensitive to growth assumptions, investing in higher quality companies has for the most part been a spectacular winning trade, particularly as the lack of value in other asset classes has justified multiple expansion. Although we are not ideologically “growth” investors, in the absence of positive earnings momentum, we recognise that compound growth is the next best thing.

Figures released today suggest that the Eurozone emerged from a "double dip" economic recession in Q2 2013, with the second part of the “dip” having begun as far back as Q4 2011. This is consistent with the recent improvements in European macro data which if sustained will see European economic growth accelerate and European corporate profits also improve in aggregate. It is worth remembering that aggregate European corporate profits are still a third below their 2007 peak and that return on equity (ROE) at just 8.7% is below the long-term average and significantly below the 18.6% peak in 2007 as can be seen below. This illustrates the degree to which corporate Europe is still “under-earning”. An improvement back to the long-term median ROE of 11% (on the current equity base) would see European corporate profits 15% below their previous peak and the P/E multiple of the market at 10x rather than the current 12.8x. If ROE were to get back to the previous peak of 18.6% then earnings would be 43% above the previous peak (assuming the same equity base) and the P/E of the market would fall to 6x*. Although European equities have had a strong run since Draghi's OMT announcement last summer, this suggests there could be further to go if the economic recovery proves sustainable. 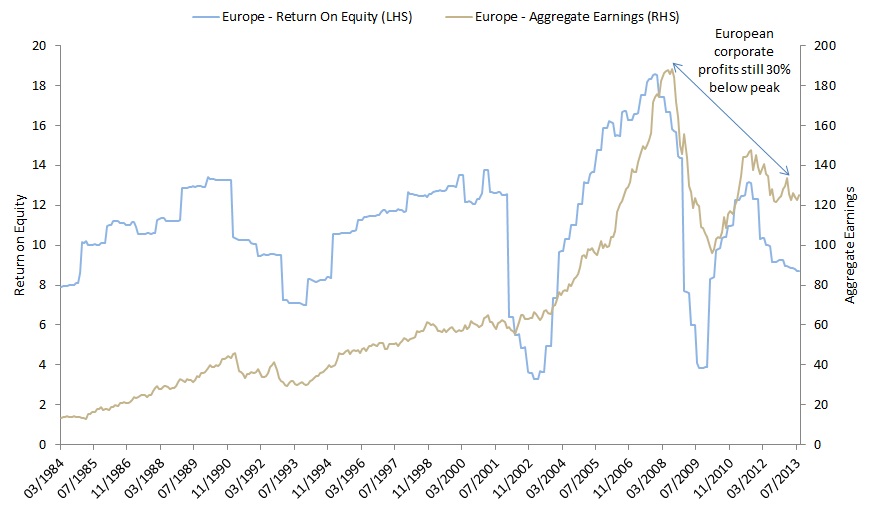 Such a rebound in economic growth and corporate profitability would necessarily entail wider market participation in profit growth and a rebound in profitability in stocks where earnings have been cyclically depressed. There are of course no guarantees that the economic recovery will be sustained. The delta in economic expectations is also unlikely to be significant enough for stocks to be successfully selected without careful fundamental analysis, with many “bombed out” companies still having too little prospect of earnings growth and too much balance sheet risk. Whether the economic tide rises high enough to float all boats remains doubtful.

Nevertheless, we think identifying stocks where earnings - powered by a cyclical recovery in the western world - have scope to recover some way back to previous levels as economic growth normalises may now be more rewarding than simply extrapolating the recent success of quality companies. This may be particularly so where the quality companies look too richly valued and where earnings momentum – in contrast to that of the market as a whole – has turned negative. As such the near-term future of the stock-market may be more “dirty thirty” than “nifty fifty”.

European equities are fast shedding their pariah asset class status. For much of the last three years the asset class has oscillated between a PE of 8 to 12 times static earnings** depending on the perception of Euro-zone “tail risk”. Now, not only has the threat of deflationary bust diminished but for the first time in three years the prospect of a genuine economic recovery – and with it meaningful aggregate corporate profit growth - looks plausible. Returns from profit growth rather than simply a re-rating would also be a welcome return to normality for ideological earnings momentum investors like ourselves.