On 19th June Bernanke explicitly outlined the Fed’s timetable for monetary policy. Assuming that the US economy continues to recover in-line with their expectations “tapering” of asset purchases might begin in October with exit complete by mid-2014 by when the US unemployment rate would be below 7%. In addition, the Fed would only begin to raise interest rates at a later date with an unemployment rate of 6.5% (assuming this was also consistent with its inflation rate of 2%)1.

Fed “tapering” talk over the last two months has seen yields on 10-year Treasuries rise to 2.50% at the end of June, a 49% increase in just 2 months from 1.67%2. This has re-priced the global “risk free rate” negatively impacting all asset classes. We think European equity investors should embrace this volatility: for it likely heralds the end of the dark age of bonds and the dawning of a new age of equity.

If we study the impact of Fed “tapering” on European government bond markets, it is noticeable how the lowest risk sovereigns have seen the biggest rise in yields (e.g. Swiss 10 year bond yields have nearly doubled in 2 months) indicating that this bond market sell-off is all about interest rate risk rather than credit risk. This is very different from turbulence we have seen in European government bond markets since 2008 which have been all about credit risk and weaker sovereigns running out of money. In other words, the bond market is concerned that this economic cycle might just be a bit more normal and that the risk of a deflationary bust (which has justified holding bonds in stronger sovereigns at negative or near zero yields) has significantly diminished. 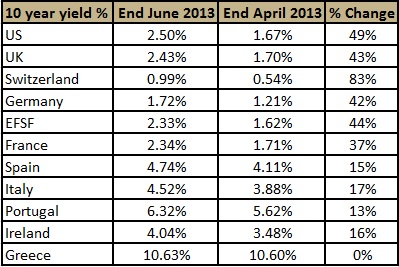 As such whilst bond investors might fret that their multi-decade bull market may now be at an end, interest rate risk alone is just not particularly scary for us as European equity investors, particularly in comparison to the deflationary bust scenario. If interest rates rise because economic growth is accelerating this is offset for us by faster economic/profit growth and a lower equity risk premium. The bond investor has no such compensating factors.

What we as equity investors should be concerned about is policy error. In other words, that central banks exit monetary stimulus before economies have reached “escape velocity”. It is worth remembering that central banks have gone to extraordinary lengths via unorthodox monetary policy to get any response from the real economy (often with the same critics who argued that quantitative easing had no effect now arguing it is dangerously simulative). It is no time now for central bankers to lose their nerve just as the first signs of a sustainable real economy recovery appear on the horizon.

In this regard, Bernanke’s insistence that the timetable is flexible depending on incoming data provides some comfort. Whilst our suspicion is that the Fed’s timetable for “tapering” is ambitious given the increasing volatility in Emerging Market economies and in particular the likelihood that (commodity induced) inflation significantly undershoots, Fed “tapering” induced volatility in European equities should present buying rather than selling opportunities in our asset class.

*In the equity world, discount rates are used to discount cash-flows into perpetuity. A percentage change in the discount rate therefore better captures the increase or decrease in capital value resulting than a simple change in yield expressed in basis points which expressed by itself captures no duration risk. Equally, the risk to capital value of a 10 year bond is not captured by a move in yield measured simply by basis points.

If we expressed the change in interest rates in terms of basis points it would show a fairly uniform increase across government bond market yields of 50 - 80 bps hence reinforcing our point that current turmoil in the bond markets is about interest rate risk rather than credit risk which is inherently more equity friendly.