Gold and silver prices are now 26% and 55% off their 2011 highs of $1,897/oz and $48/oz respectively. It strikes us that the most remarkable aspect of this new bear market is the bewildering absence of an accepted narrative that might serve as an explanation, particularly as central banks generally have become more rather than less bold in their policy actions since 2011. We would however caution against the consensual view that the precious metals have experienced nothing more than a “technical setback”. Gold has become the world’s laziest investment: there being no price at which its enthusiasts wouldn’t rather buy more than sell, despite all reasonable attempts to value gold pointing to its chronic over-valuation.  We think there is worse to come for gold, gold miners and gold bugs, particularly if the US economy continues to recover at its current pace. Let us explain why.

Gold has protected purchasing power against central bank fiat money over many centuries. But recent returns from gold have been significantly in excess of any credible measurement of inflation. Since 1968 (when the fixed $35/oz peg was replaced with a private market) the US consumer price index of core inflation has risen from 15.6 to 106.7 (584% or an annual rate of 4.5%), a devaluation in purchasing power of the US dollar of 85%. Over the same period the price of gold has increased from $35.2 per oz to $1400 per oz today (3867% or an annual rate of 8.7%). Since 2000, however,  the US consumer price index of core inflation has increased by just 37% (2.4% per annum) compared with the price of gold which has increased by 360% (12.5% per annum). In other words, over the last decade gold has massively outperformed what it is supposed to hedge and overshot any fundamental valuation. If gold was fairly valued and a perfect hedge against inflation in 1968, and its price increased in-line with inflation since then, its fair price today would be $240 per oz which is just 17% of its current price. The deviation between gold’s current price of $1400/oz and its intrinsic inflation adjusted fair value of $240/oz could be categorized as an old-fashioned “tulip mania” asset bubble.

It is important to recognise that gold is not the only asset class that can hedge against inflation: equities also share these characteristics (whilst bonds and cash do not). To illustrate this let’s look at a company which is equally funded between debt and equity. The company makes $10m of profit, of which debt holders are entitled to a fixed return of $5m whilst equity holders receive the $5m left over. If inflation were to rise 100%, and both revenues and costs double (whilst volumes remain unchanged) profits would also double to $20m. The debt holders would still get their $5m, but equity holders would receive $15m rather than $5m. Of course, the debt holder hasn’t suffered a capital loss but his $5m is now only worth $2.5m in purchasing power. Where has that $2.5m gone? To the equity holder whose $15m of profit is worth $7.5m in old money (a $2.5m improvement on the previous $5m). To paraphrase the great American economist Irving Fisher, inflation has picked the pocket of the bondholder and given it to the shareholders.

But if gold is expensive, how does it compare to the value of equities? Given that gold has no yield, to compare it with equities we need to measure equity market returns using gold as a currency.  If we look at European equities, measured in gold, we can see that in 2000 equities reached a record level of expensiveness relative to gold, with the price of the European equity index six times the price of gold. That, my friends, was the time to sell equities and buy gold. By contrast today the same ratio is just one to one, which is not quite as cheap as European equities got relative to gold as in 1980, but suggests that gold is today far too expensive to be a useful inflation hedge. Equities by contrast offer a far cheaper alternative. In fact, today gold looks like the ultimate high risk, low reward investment rather than the commonly portrayed low risk, high reward investment. 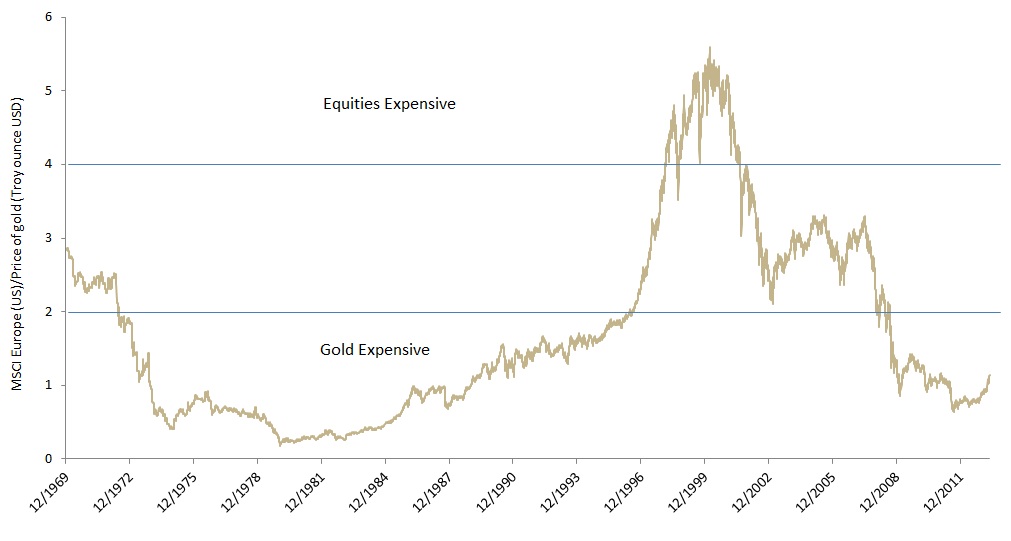 There is another problem for gold, namely that its antithesis, the US dollar should inspire greater confidence in the world’s financial markets. Back in 2009 we commented that a new global economic cycle based on US renaissance rather than Chinese industrialisation would see a materially stronger greenback (Dollar bears, China bores and the V-shaped recovery that no-one is predicting). We think this has further to go. US home prices are now increasing at a double digit pace year-on-year and its unemployment rate at 7.5% (down from a peak of 10%) is falling toward an acceptable equilibrium of 6.5%. The debate on US quantitative easing has therefore shifted to the timing of less rather than more stimulus. This is in stark contrast to the central banks of the other main currency blocks, notably Europe and Japan. This should return the US dollar to its status as undisputed global reserve currency.  If the US economy attracts foreign capital and the greenback regains its appeal, why would investors from now on want to buy gold as an alternative, particularly if the dollar may pay a more attractive interest rate at some point in the not too distant future? In a world of US dollar economic and financial hegemony, last seen in the 1990s, who needs gold?

If we are cautious on the prospects for the yellow metal we must also warn on those of the gold miners themselves. The decade long boom in the price of gold has encouraged the gold miners to extract much lower grade ores, with the average industry grade falling from 2g/mt to 1.5g/mt.  This has resulted in significantly higher costs, with the expected boom in industry profit margins failing to materialise. So whilst the gold price has risen almost five-fold, median EBITDA margins for even the world’s blue-chip gold miners have only improved by just 22% (from 36% to 42%) and have in fact declined since 2010 from their peak of 53% (see chart below). This explains why gold mining shares started to underperform well before the peak of the gold price. 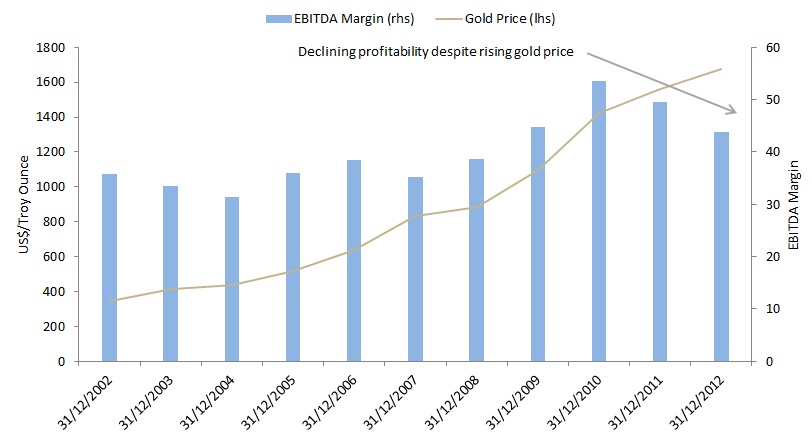 No upside leverage does not mean that gold miners are not levered to a weaker gold price, far from it. The world’s leading gold miner, Barrick Gold, believes that the entire industry’s all-in sustaining costs of production are now $1,200/oz up from $300/oz in 2002 (with cash costs of production rising from $200/oz to $750/oz). In most cases analyst profit forecasts are still using a gold price of $1,500. This means that the average gold miner selling gold at $1,400 will see profits downgraded by around a third and that the industry is only a further 15% fall in the gold price away from being unprofitable as a whole and haemorrhaging cash. Of course gold miners would likely respond to further price falls by mining only higher grade ore and cutting back on maintenance capital expenditure  but there would nevertheless likely be significant corporate casualties. With limited gearing to gold price upside and asymmetrical downside owning gold mining equity looks a particularly unappealing trade.

Trading at $1400/oz. (nearly six times its inflation adjusted fundamental value of $240/oz.) gold has become this generation’s asset bubble, comparable with the NASDAQ in the late 1990s or Tulip mania in the 17th Century. With confidence in its antithesis the US dollar returning and the debate over Fed QE shifting to the timing of less rather than of more, the $240/oz question is who needs gold now?

The universe consisted of the world’s top 6 listed miners by gold produced. They are: