This weekend will see the UEFA Champions’ League final contested at Wembley, the home of English football, by Germany’s top two sides, Bayern Munich and Borussia Dortmund. By way of contrast this was the first season since 1995-6 that no English club has progressed to at least the quarter-final of the competition. Next season will also see former Barcelona manager Pep Guardiola take over at Munich having reportedly spurned job offers from the top English clubs. For many this illustrates a shift of dominance in European football from the English Premier League to the Bundesliga. We think it also corresponds with a superior investment opportunity in Germany’s Sky Deutschland compared with its UK counterpart BSKYB.

The start of the 2013/14 season will see Sky Deutschland begin a new four year contract, this time with exclusive rights to show all Bundesliga games for €1.95bn (€486bn per annum). At the same time BSKYB began a new three year contract to show 116 live English Premiership games for £2.28bn (£760m per annum) with BT also paying £738m (£246m per annum) to broadcast 38 live games. In other words the total cost of Bundesliga rights at €486bn per annum (£415m) is only 41% of the cost of the English Premiership’s rights at £1bn per annum. No one would claim that the Bundesliga is less than half as good in terms of quality. 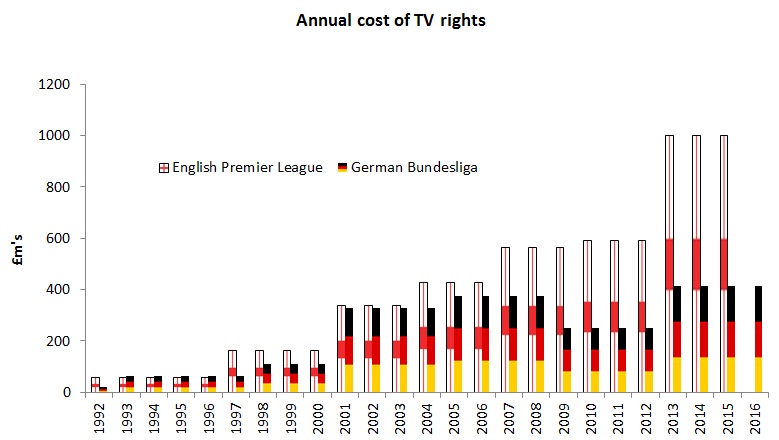 The cost of Bundesliga rights in fact reflects the benign competitive environment for premium TV content in Germany where in contrast to the UK the cable and telecom companies have little interest in offering content in addition to distribution. As a result Sky Deutschland has secured exclusive rights for a relatively inexpensive cost which the cable companies are happy to distribute. This lack of competition reflects a historic lack of success in monetising the value of football rights (Premiere which “won” the rights in 2000 subsequently went bust; Unity which “won” in 2004 saw the other cable companies refuse to distribute the product). This has resulted in a high degree of scepticism that the premium Pay-TV model will ever work in Germany.

Even today Sky Deutschland has just 3.3m subscribers out of a possible 42m TV homes in Germany and Austria (8% penetration). This is in contrast to the UK where BSKYB has 10.2m subscribers out of a possible 28m TV homes (36% penetration). So why will Sky Deutschland succeed when its predecessors have failed? Because its now majority shareholder (NewsCorp) has brought management know-how which was previously absent and a balance sheet able to sustain the necessary level of premium content, technological and marketing investment to attract and retain subscribers: the company has unrivalled content (Bundesliga, HBO, Sky Atlantic, Sky Sports News, Formula 1); there is high evidence of consumer satisfaction with customer churn falling from 27% in 2008 to 10%; ARPU’s (Average Revenue Per User)  are increasing with only 10% of customers taking the basic package with HD, SKY+ and multi-room all having  impressive levels of penetration. All of this together with the Bundesliga momentum could turn Sky into a “must have” German consumer product.

Sky Deutschland is not an investment without risk: its current 3.3m subscribers do not generate enough revenue to cover its largely fixed cost base. But the fixed cost base means that every net new subscriber brings additional revenue with negligible incremental costs. Management currently forecast the company to break even at the EBITDA level in 2013 with 3.5m subscribers by year end. We think that the market underappreciates the value of this incremental subscriber growth at Sky Deutschland.  Our sensitivity analysis suggests that if the company were to achieve 5m subscribers it would make €400m of net profit; if it were ever to achieve 10m subscribers (as with BSKYB in the UK) it would make c. €2bn of net profit. To see the potential of the investment these figures should be compared to Sky Deutschland’s current market value of just €4.5bn (plus net debt of €300m) and the current market value of BSKYB in the UK of £12.3bn (€14.4bn) (plus net debt of £1.7bn (€1.9bn)). Whilst a German club is certain to win at Wembley on Saturday; Sky winning in Germany could be a better bet.

We currently invest in Sky Deutschland and not BskyB.

This document has been provided for informational purposes only solely for Professional Clients as defined by the FCA and does not constitute investment advice. Information and opinions expressed in this material are subject to change without notice. They have been obtained or derived from sources believed by Argonaut Capital Partners LLP to be reliable but Argonaut Capital Partners LLP make no representation as to their accuracy or completeness. The writer of this piece may have conflicts of interest as may have personal holdings in the companies mentioned.

‘The ECB: Is Mario about to put on his superhero tights?’