Everyone knows that emerging market (EM) economies are growing faster than those in Europe. However, European companies have been outperforming those in EM for over two years now. Not many people are talking about this and mutual fund flows definitely don’t reflect this, but you would have to go back to calendar year 2010 to find the last time emerging market stock indices outperformed their European peers. So what is going on?

In order to analyse this we used the MSCI Pan European and the MSCI Emerging Markets indices as proxies for Europe and emerging markets. Using these we are able to see which sectors and industries are the most important contributors to earnings. As can be seen from the table below, EM generate 71% of their earnings from the economically sensitive areas of energy, materials, industrials and banks. The same sectors account for 48% of European earnings. If one includes technology hardware and semiconductors as economically sensitive industries, then 71% jumps to 82% for EM, whilst Europe remains broadly unchanged. What this means is that EM are very sensitive to economic growth, much more so than Europe. 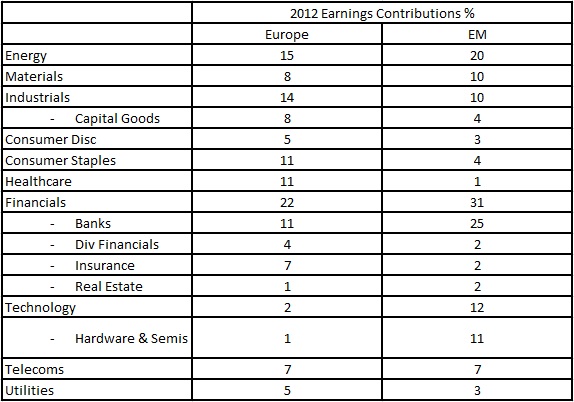 Knowing this helps put into perspective the performance of the two markets when overlaid by changes in global GDP growth. The table below details nominal GDP growth rates as well as the change in these growth rates. This neatly shows how when growth is accelerating, like it did in 2010, EM outperform. However when growth is either decelerating or slow, the European markets outperform. Again reinforcing the fact that EM are a highly geared play on the economic growth outlook.

Closely linked to global GDP growth and the health of EM are commodity prices. For EM this sector (energy and materials) contributes a significant 30% of total earnings. In Table 2 above we have also included the performance of the CRB Index as a proxy for global commodity prices. Again, the performance of this index and thus commodity prices coincides neatly with that of EM equities. Thus not only are EM earnings highly sensitive to global GDP growth, they are also acutely exposed to the performance of commodity markets. The so-called “commodity super-cycle” that began more than a decade ago has been a phenomenal tailwind for EM equities, but will this continue in an environment of low economic growth and with the build-out of Chinese infrastructure largely behind us – the hitherto source of incremental demand? Our best guess is, not. If then the commodity super-cycle has indeed peaked, so has the outperformance of EM equities.

What then for earnings expectations this year? Table 2 above suggests expectations are for global GDP growth to accelerate a mere 0.4% for an overall growth rate of 3% versus last year’s 2.6%. Thus a not unreasonable assumption that, economically, this year will be similar to last year ie: low growth with pockets of weakness. With this in mind it is puzzling then to see that analysts’ are expecting double-digit earnings growth for EM this year, oddly similar to their expectations at the start of last year. With these earnings being particularly sensitive to economic growth, there is ample room for disappointment – much like last year. The table below highlights this. In this table we have also added a tweak, by showing these earnings growth rates excluding banks’ earnings*. Interestingly, on these “tweaked” earnings, EM earnings suffered a larger downgrade versus expectations than those for Europe. Also, with a growth forecast of 7%, European earnings seem more grounded in reality than those of EM with forecasts of 15% .

Yes it is likely that global growth this year will be better than last year, but equally this does not necessarily mean EM equities will outperform. Much is baked in the cake already in terms of expectations, and any slowing in growth should affect them disproportionately. Contrary to popular choice, Europe has been and probably will be a better place to invest than EM until there is a rapid acceleration in global economic growth.

*As written about in previous blog (Banks: Europe’s highest growth sector?) we are highly sceptical of the jump in European banks earnings this year as they seem to be based almost exclusively from assumptions on improving provisioning of which there is little evidence.

‘Ryanair and the importance of high ROE for growth and dividends’