The recent food industry scandal whereby beef has been unscrupulously substituted with cheaper horsemeat is not without economic rationale or historic precedent. In 1866, the French government legalised the sale of horsemeat as an alternative to beef which during hard economic times was beyond the means of the average Frenchman1. The biggest market for horsemeat nowadays is however not France but China, followed by Mexico, Kazakhstan and Mongolia2. We are all familiar with the Malthusian narrative of ever increasing food consumption and population growth. Could the horse be the victim of the inability of the global economy to scale up the production of affordable meat?

Fear not, you equine enthusiasts: for the horse lacks in comparison to cattle, poultry, pork and seafood what agronomists call Protein Production Efficiency. Put simply, the horse is a poor convertor of grass and grain input to protein and meat output. This should logically save the hapless horse from becoming a regular dinner table fixture. As every pony club parent knows, it costs a lot of money to feed and care for a horse. No rational farmer would rear horses solely for meat given better bang for buck from other animals. When horses are slaughtered for their meat it is usually because they are no longer fit for their original purpose as was the tragic case of the 1986 Kentucky Derby winner, Ferdinand, who ended up as Japanese pet food.4

The Feed Conversion Ratio tells us the ratio of feed needed to increase an animal’s bodyweight. Whereas cattle need 8kg of feed to increase their bodyweight by 1kg, a pig needs 3kg and a chicken 2kg. The most efficient converter of protein to meat is however the farmed salmon, needing just 1.2kg of feed to increase its bodyweight by 1kg3. This is largely because salmon is cold-blooded and does not need to use energy to heat their bodies. Around two-thirds of a salmon is also edible; this is in contrast to chicken and pork where the same ratio is one fifth and one tenth respectively. In addition, salmon has well-known health benefits being rich in Omega 3 and amino acids.

Since 1988 the price of beef has increased from $1.13 per pound to $1.95 whilst the price of salmon has fallen from $8.47 per Kg to $6.25. This can largely be explained by the greater feed intensity of beef (and therefore gearing to rising grain prices). There is an additional factor.  Farmed salmon also requires less freshwater consumption: 1,500 litres of fresh water per kg compared with 14,000 litres each kg of beef. Greater scarcity of freshwater has meant that cattle herds have become more vulnerable to drought. Since 1988 the price of salmon has fallen by two thirds relative to the price of beef and become much more affordable as a result. Global consumption of fish has doubled over the last 30 years. With the wild catch unable to expand, the production of farmed salmon has increased by 600% since 1980. 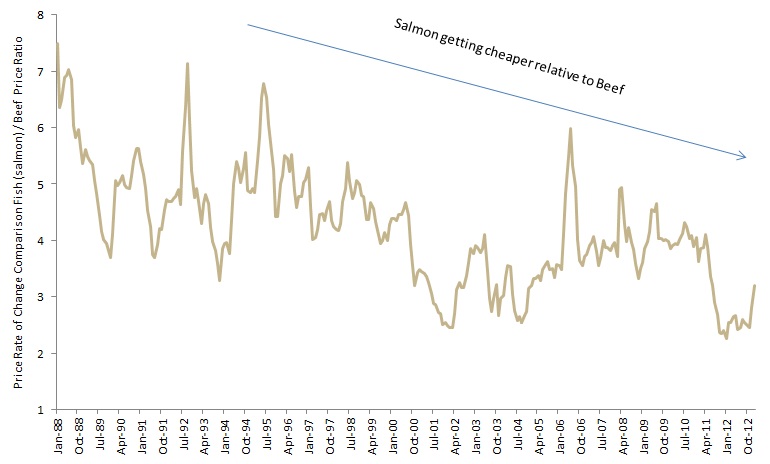 But although farmed salmon is a great growth industry, it is also highly cyclical. When salmon prices are high, farmers bring on production and supply temporarily exceeds demand driving down prices. This is exactly what has happened over the last couple of years with global supply of farmed salmon increasing by 12% in 2011 and 20% in 2012. For most of 2012 the salmon price hovered around 25NOK/Kg with most producers struggling to break-even. At this point in the cycle those farmers without access to capital are forced to scale back production and the salmon price bounces back. Indeed, since October 2012 the salmon price has risen 50% from NOK24/Kg to NOK36/Kg. In its recent trading statement the world’s leading salmon producer, Marine Harvest commented on “a momentous positive turn from December (2012)” in the market for Atlantic farmed salmon.

The price of salmon 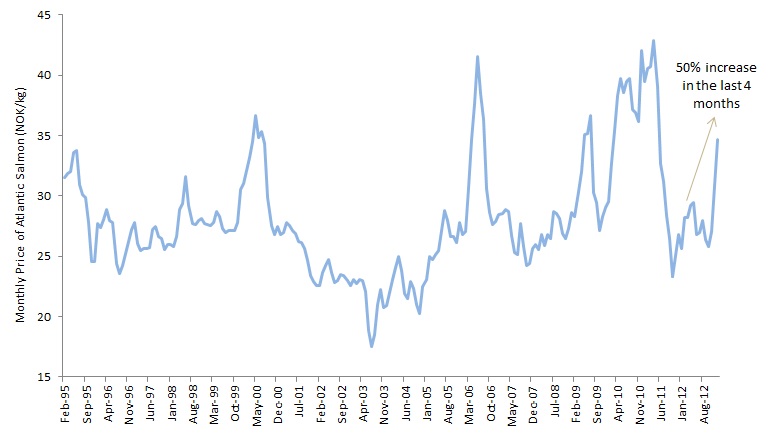 There are a number of reasons why we believe that the salmon price should remain elevated for at least a couple of years. First, the Norwegian government has stopped handing out new licenses for new salmon production. This means that Norwegian production (60% of global production) will actually fall this year and global production should only increase marginally. The last time this happened was in 2010 when the salmon price hit NOK43/Kg. Second, even if production were increased tomorrow, new supply wouldn’t hit the market for another two years (it takes 18 months to “grow” a salmon). Lastly, the restriction which previously limited any one company to controlling only 25% of Norwegian licenses was recently abolished, meaning that the industry has begun to consolidate, which is usually incrementally positive for pricing in any industry.

In contrast to the dull economic and profit environment elsewhere, we therefore think the salmon industry and the Norwegian salmon stocks are on the verge of a mini-boom and profit bonanza.

The figures in this document have been obtained from external sources believed to be accurate at the time of writing however no representation or warranty, either express or implied, is guaranteed in relation to their accuracy, completeness or reliability. The Information is not intended to be a complete statement or summary of the securities, markets or developments referred to in the document.

‘Ryanair and the importance of high ROE for growth and dividends’

‘The Value of Growth’