There’s a party in the credit markets, but the real economy seems not to have been invited. Credit spreads having tightened significantly over the last twelve months and interest rates are on the floor, yet GDP growth remains anaemic. Are we living in a parallel universe? With money being optically cheap it is tempting to conclude that all participants are benefiting from a lower cost of debt. You would be right, but only to a degree…..

To understand this we have split the universe of participants into large, listed companies on one hand and individuals and SME’s on the other. For our universe of large, listed stocks we used the MSCI Europe ex UK index. Importantly, within this universe, we created subsectors in order to highlight the discrepancy in funding costs between weak / low quality companies and strong / high quality companies. The proxy we used to define a corporate’s “quality / strength” was its five year Credit Default Swap (CDS), (essentially the cost of insuring its debt against default. Of course this excluded those companies who do not have a CDS (primarily due to them being net cash positive and only using short term bank financing). We created five quality brackets by grouping stocks according to their CDS’ – the lower the CDS number, the higher the quality. On the other hand, our proxy for the cost of debt was a Bloomberg generated weighted average cost of debt.

Chart 1: Weighted average cost of debt for each CDS basket1 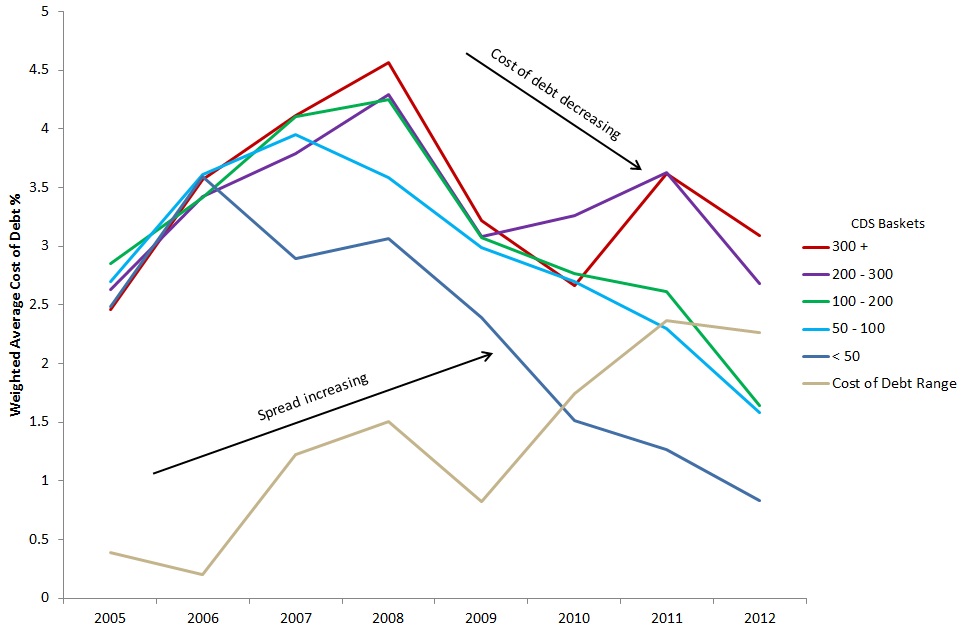 Chart 1 illustrates a number of points. Firstly it highlights the fact that quality businesses are able to raise money at cheaper rates than lower quality businesses. Secondly, and perhaps more interestingly, this competitive advantage has been ever increasing, particularly since the financial crisis in 2008 and the subsequent central bank meddling in the money markets. In 2005 the spread across our entire range of CDS baskets was 40 bps, in 2007 it was 122 bps and by the third quarter of 2012 it was 226 bps. Further, looking at the underlying data, it is also instructive to note the country dispersion within the CDS baskets. For those companies with a CDS of below 100, 70% of them were from Switzerland, Germany, Norway and Sweden. On the other hand there was no representation from Italy, Spain and Portugal.

Interestingly, this funding discrepancy described for listed companies above is also mirrored in our other universe – that of individuals and SME’s. To show this we used data from the ECB who have tracked the spread of interest rates between very small loans (less than EUR 250k – proxy for individuals and SME’s) and large loans (greater than EUR 1m – proxy for larger corporates) since June 2010. Chart 2 below shows this spread, and it remains high at 230bps, on average, in the euro area. However this is not the full story. The spread has increased due almost entirely to the interest rate on very small loans having in fact gone up from 3.7% in June 2010 to 4.6% in November 2012, while that on large loans has remained constant at 2.3%. Furthermore, looking at the underlying data, there is significant disparity across countries. Whilst in Germany this spread has declined from 210bps to 160bps, in Spain it has increased from 130bps to 290bps. This is because, on average, small loans to individuals and SME’s in Germany are currently charged at 3.7% versus those in Spain at 5.4%.

Chart 2: Spread between lending rates on very small and large loans in the Euro area2 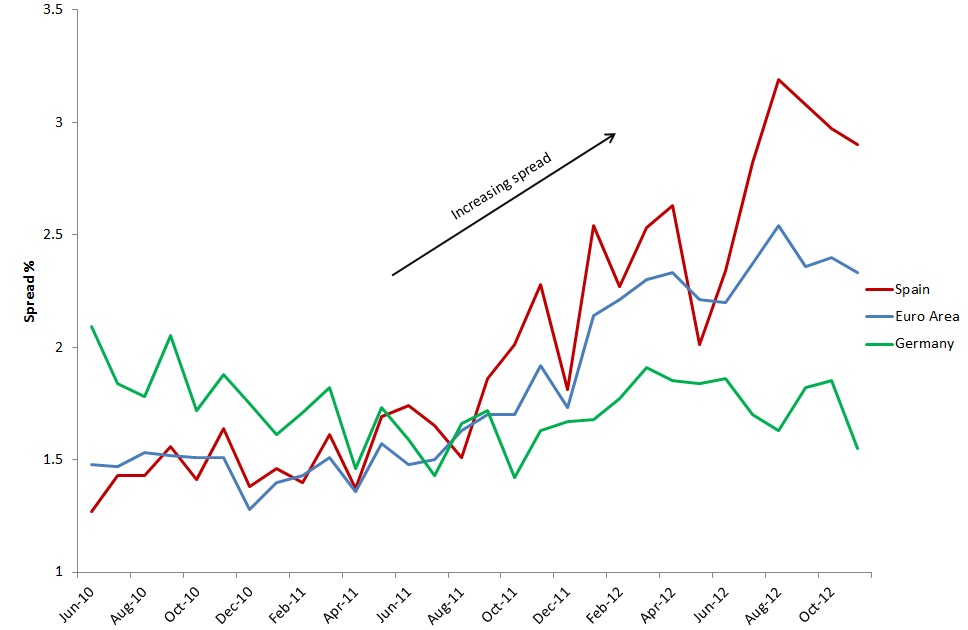 In other words, what this tells us is that if you are a large company in Germany with a strong balance sheet and a healthy business, you are able to access capital at the lowest levels on offer. On the other hand if you are an individual or SME in Spain, credit conditions for you have in fact tightened, with rates bearing little resemblance to those achieved in the liquid credit markets. The reason is simple – individuals and SME’s borrow almost exclusively from banks and do not have access to the broader credit markets. This universe of individuals and SME’s generally represent the backbone of the economy, and the inability or unwillingness of banks to provide them with cheaper funding, is significantly affecting the anticipated positive feedback loop between the credit markets and the underlying economy. In essence, a parallel universe has been created. Put simply, the larger your company, the stronger your balance sheet and the higher the quality of your business; the greater your ability to take full advantage of the current low cost of money – giving you a competitive advantage.

‘The Value of Growth’