‘Are European funds positioned where you think they are?’

We have written in a previous blog (Access to capital and the uncommon stock – the true driver of the “nifty fifty” new stock market cycle) regarding uncommon stocks and how their competitive advantage in terms of cost of capital enables them to generate earnings growth within a low-growth macro-economic environment. Some of the examples mentioned were household names such as Nestle and Volkswagen. What these companies also have in common is size. Size brings economies of scale, lifts barriers to entry in arrears such as distribution and enhances bargaining power. To some though, the idea of investing in these mega-cap companies is considered “consensual” with these stocks already “well owned”. However is this really the case within Europe? To analyse this we looked at the universe of European ex UK funds within the IMA sector (hereafter referred to as European funds). What we found is presented in the table below and suggests the opposite – these companies may indeed be “under-owned”.

The table below details the twenty largest stocks, in descending order, by weight in the MSCI Europe ex.UK Index (as a reference the market cap range is € 35 bln to € 160 bln). We have compared these to the most owned stocks within the European fund universe (we gathered data on 98 out of a possible 104 funds). The table details the number of funds holding the largest twenty stocks in their top 10 (as a percentage) and the average weighting of these in their portfolios. However in order to gain a better feel for ownership across the universe we calculated an adjusted average weighting, by assuming that a fund’s holding in a stock was zero if it did not appear in its top ten. We then compared this adjusted number to the MSCI index weighting to give us an idea of the level of active ownership in these stocks. 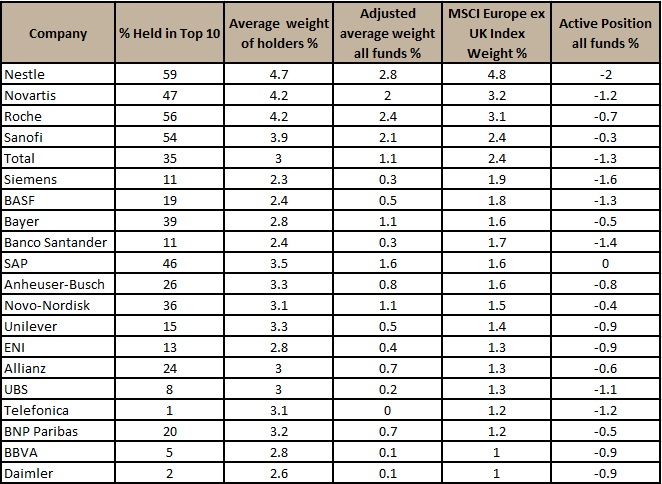 The table shows that European funds are structurally underweight the mega-cap universe. Of course some of these stocks are under-owned for good reason (think Spanish banks BBVA and Banco Santander). However the reasons for not actively owning some of the more growth orientated stocks with solid balance sheets is far less obvious. Concerns over position size and liquidity are irrelevant given the size of these stocks, and anyway, outside of the largest three stocks, a 3% position would be enough to run an active bet. Does this then mean that fund managers are ignoring these mega-cap names in search of more “exciting” stories lower down the cap scale? In a world mired in an environment of low-economic growth, what could be more exciting than companies which are able to utilise their competitive advantage in terms of scale and access to capital markets to grow revenues and earnings, at the expense of their weaker competitors –think Nestle, SAP, Anheuser-Busch, Volkswagen etc.

Far from being consensual and boring stocks, many of the mega-caps may indeed represent compelling investment opportunities – particularly when compared to other asset classes in general. Indeed, if positioning is a reflection of consensual thinking, then we are perhaps only in the foothills of a new stock market cycle that is to be led by these uncommon, nifty fifty-type stocks (Is a new bull market already underway in “growth” stocks?) .

‘Reminiscences on a decade as a Euro Stock Operator’