As we noted in a blog earlier this week European analysts currently see the Banks sector as delivering the strongest growth in corporate earnings in 2013. This follows a fall in bank profits of nearly 19% this year. Banks are expected to deliver 28% profit growth in 2013 compared with the forecast of 12% growth for market earnings1. Given that this time last year the same analysts were forecasting 21% growth in bank profits for 2012 (which has since been proven to be 39% too high) it would be easy to write off bank analysts as being perpetually over optimistic. But maybe 2013 will be different?

Bank profit forecasts are clearly a result of a number of other assumptions. We could point out that in an environment where banks are trying to reduce leverage without raising equity they are unlikely to want to increase assets and that fewer assets mean lower revenues. We could also suggest in this muted revenue growth environment it will be difficult for banks to meet commonly held assumptions that cost/income ratios fall in a meaningful way. In fact, we think it unlikely that operating profit at Banks will see any significant improvement. But this does not matter. These are immaterial for bank earnings compared with the forecast fall in provisions for bad loans.

As we can see provisions have actually risen every year in the European banking sector since 2007 – with the exception of 2010 when the European economy saw a strong economic recovery (at least for a few quarters) from a deep economic recession. Recent improvements in bond and stock markets will certainly have raised expectations of economic growth for 2013, perhaps to 1%, compared with 0% in 2012. This compares with 2% growth in 2010 following a deep recession when the European economy contracted by 5% in H2 2008/H1 20092. In other words we might expect an improvement in economic growth in 2013 of 100bps, but this would not be comparable to the 700bps witnessed in 2010, which saw provisions for bad loans fall substantially. 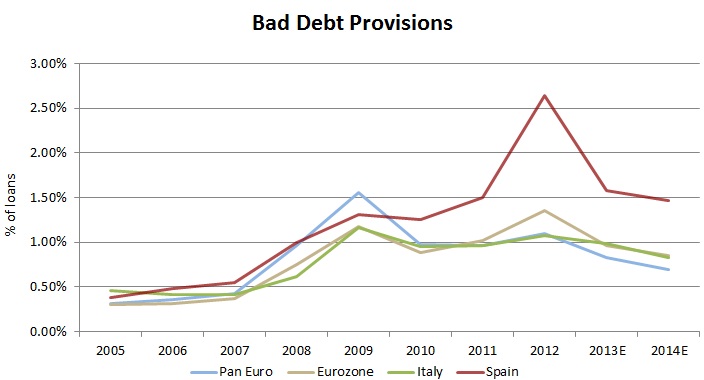 We also now have the effects of fiscal austerity to consider. The ECB’s apparent willingness to buy sovereign bonds (and the promise that the ECB will not insist on senior creditor status) has convinced markets that the threat of sovereign default in the Euro-zone is now minimal. Even if we accept that private creditor exposure to sovereign default is now negligible (which is not our view) the strict conditionality of ECB action is likely to result in more austerity and economic pain in the short-term. In other words, the willingness of the ECB to ensure that sovereigns such as Spain do not run out of money will likely be dependent on greater short-term fiscal tightening. It is therefore questionable whether Spain or indeed Italy will emerge from recession in 2013.

Bad loan formation will be a key lead indicator of the future path of bank bad debt provisions. Non-performing loans as a percentage of bank loans have increased every year in Europe since 2007 (Figure 3). There are no signs of any improvement. At the end of June 2012 9.4% of Spanish loans were non-performing (the highest NPL ratio since 1962) up from 6.7% in June 20113.  Without economic growth it is not unreasonable to suspect that non-performing loans will continue to rise. This is true in Spain as in the rest of Europe. And whilst bad loans continue to increase so in theory should provisions, meaning that forecast earnings growth from significant falls in provisioning look distinctly ambitious. 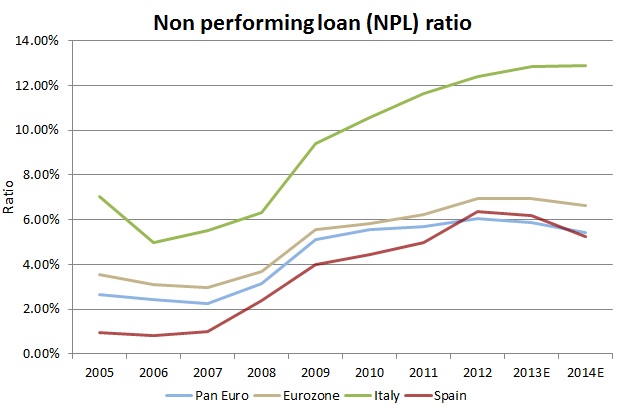 Source: Barclays, October 2012 *NB: A non-performing loan is usually one which the debtor has not made a scheduled payment for at least 90 days, however definitions vary between countries e.g. Italy has a stricter definition, hence structurally higher NPL ratio.

But let's assume that we are wrong and the outlook for the European economy has changed significantly enough for banks to lower provisions. This is when financial regulators could still deny bank shareholders their windfall profits by insisting that banks use profits to rebuild their balance sheets. For instance, banks have been running down their coverage ratios (the degree to which balance sheet provisions accurately cover for bad loans) since 20074. Regulators may insist these are rebuilt toward pre-crisis levels, hampering attempts to lower provision charges. In a better economic environment regulators will almost certainly push for faster implementation of strict rules on lower leverage (such as Basle 3) meaning that banks will have to retain more capital for on-going business rather than pay-out generous dividends to shareholders. Even if banks win, their shareholders can still lose. 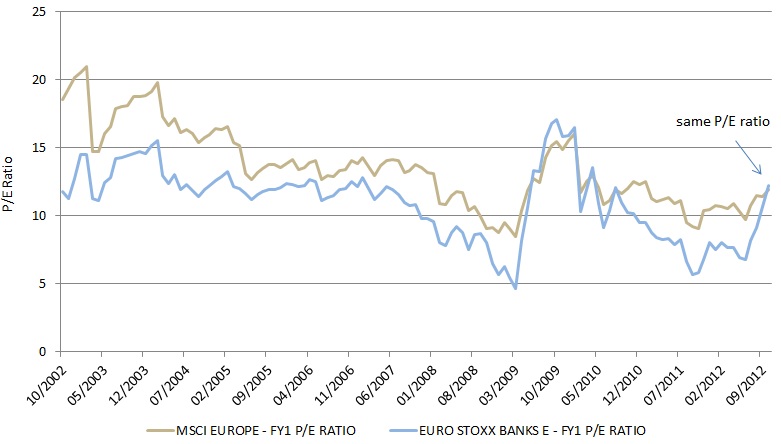 At Argonaut we believe that finding stocks which are not only cheap but which have superior trends in future earnings expectations is the key to successful long-term investing. Yet since its July low, the European banking sector has risen by 45%, whilst profit expectations have for banks have continued to fall, by 7% over the same period5. The banking sector’s normal discount to the market has now evaporated, trading on the same P/E multiple of 2012 earnings of 11.5x. For banks to still be considered “cheap” you have to believe that the sector’s 2013 profit forecasts, based on a significant fall in provisions for bad debt, have some validity. This would need a significant improvement in economic growth. And even in a more normalised growth environment, other sectors, less controversial than banks in the eyes of regulators and politicians, will likely offer greater rewards for shareholders.

‘EADS/BAE - an accidental victory for shareholders’