1.) Which two countries in the world have the lowest implied sovereign risk?

2.) Which European economies are now larger than at the peak of the last economic cycle in 2007?

3.) The two best performing European stock markets since the market bottom in March 2009 (in Euro’s) have been in which countries?

1.) Which two countries in the world have the lowest implied sovereign risk?

Credit markets articulate concerns about sovereign risk through the CDS market (the cost of insuring debt against default). The lower the number, the less expensive the insurance and therefore the lower the sovereign risk. The CDS’s for Norway and Sweden are 28 and 35 respectively and are therefore the world’s two strongest sovereign credits (as assessed by their likelihood of defaulting on their debt).  The US is third on the list with a CDS of 40. The reasons for this are easy to see. Norway has a primary fiscal surplus of 12% of GDP and a debt / GDP level of 50%. Sweden on the other hand has a small primary fiscal deficit of 1% of GDP, while its debt/GDP level is just 35%. Added to this, these countries are expected to post positive GDP growth for 2012, with Norway currently seeing the strongest economic growth in Europe at +2% YOY*. 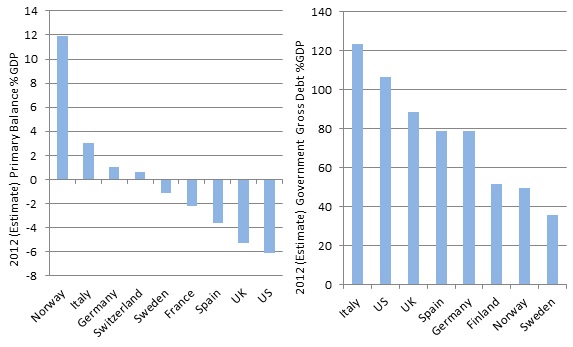 2.) Which European economies are now larger than at the peak of the last economic cycle in 2007?

The chart below shows aggregate real GDP for various European countries from the end of 2007. We can see that the economies of Switzerland, Sweden, Germany and Norway are 5.4%, 3.1%, 2.1% and 1.5% larger than they were respectively. Interestingly, the US economy is larger by just 1.4% and the UK economy is smaller than 3.8%. On the other hand the economies of Italy and Spain 5.6% and 3.8% smaller than they were in 2007. 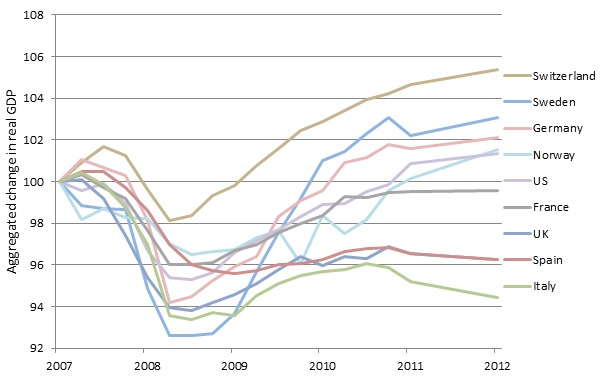 3.) The two best performing European stock markets since the market bottom in March 2009 (in Euro’s) have been in which countries?

The two best performing markets have been Sweden and Norway, coincidently the countries with the lowest sovereign risk. Additionally these attributes have meant that their currencies have appreciated significantly versus the Euro – 28% and 19% for the Swedish Kroner and Norwegian Kroner respectively.

Interestingly, the best performing stock markets have also been those with the strongest corporate balance sheets.

The table below shows the percentage (by number rather than market capitalisation) of listed stocks in each headline European index with strong balance sheet qualities. We have defined strong balance sheets as those stocks with either a CDS (5 year) of less than 100 or a consensus forecast 2012 net debt / EBITDA ratio of less than 1x. The table is ranked in terms of each index’s total return in Euros from the market bottom on 9th March 2009 to the 22nd August 2012.

From the table it is evident that a high proportion of the stocks listed in countries with low CDS prices have strong balance sheets. The importance of financial strength is perhaps even better highlighted by looking at those indices propping up the bottom of the list (Italy, Spain and Portugal) where between c.70% and c.90% of the listed companies do not have strong balance sheets. 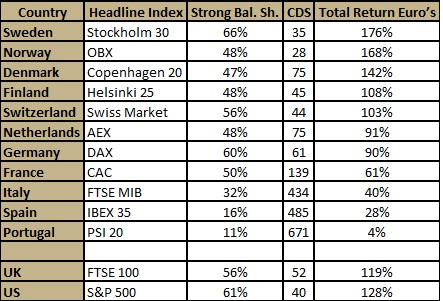 As illustrated in our earlier blog (‘Is a new bull market already underway in “growth” stocks?’) , in times of elevated risk premiums, balance sheet strength by itself can be a competitive advantage and a key determinate of investment returns.

Sentiment towards European stock-markets tends to swing from a total aversion to anything “European” to short term bursts of enthusiasm for the lowest quality stocks in southern Europe and the banking sector. This is unfortunate.

At Argonaut we have focused our investments in those countries which are at the top end of the table. To us, investing in countries such as Norway or Sweden offers exposure to secure businesses as well as the benefits of an appreciating currency. Sometimes it’s best to keep things simple.

‘Is the OMT just the pari-passu SMP?’