Despite being Europe’s biggest stock by market capitalisation Nestle is often thought to be either too boring or too expensive to warrant much attention. We disagree. We think the “expensive” valuation of 18x 2012 earnings does not take into account the balance sheet strength, the likely future compound earnings and dividend growth or the high probability that these growth ambitions will be achieved.

Nestle reported its financial results for H1 2012 this morning. These highlighted that 2012 will likely be another year of organic sales growth in excess of 5% (which the company has achieved 16 out of the last 17 years) and margin expansion (achieved 14 of the last 17 years). The engine of this growth continues to be its 70 “billionaire” brands, each with sales of over CHF1bn (think Nescafe, Nespresso, Lean Cuisine, Kit Kat, Skinny Cow Ice Cream, Gerber baby food, Perrier and Pellegrino water, Gourmet and Felix pet food) which handily are also its highest margin products. The company is also well diversified by geography with emerging markets at 40% of sales (currently seeing organic revenue growth of +13% year on year). Europe accounts for just 18% of geographic exposure, but unlike some of its peers Nestle still saw revenue growth in Spain, Italy and Greece.  The consistency and quality of the Nestle business has allowed it to grow its dividend every year over the last 17 years at an average rate of 12% per annum, a compound 600% increase (over the same time period it has also bought back 21% of its share capital). If we need a reminder of what stocks offer (and bonds do not) it is the astonishing and under-appreciated results of consistent compound growth. 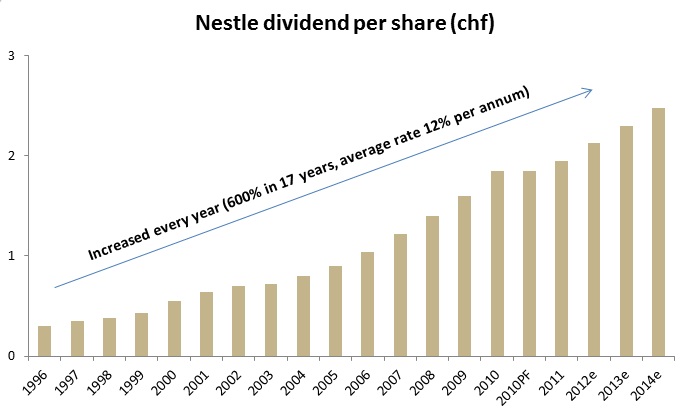 Nestle is also a relative winner in a difficult economic environment where scale, access to capital and competitive advantage matter more. The company’s annual advertising budget of CHF12bn buys a lot more air-time; whilst few competitors can match its CHF1.5bn annual spend on food and beverage R&D. Moreover, whilst most companies have seen their cost of borrowing increase since the credit crunch began, Nestle’s has dropped to an average rate of just over 2% (to think that in 1998 its average cost of debt was 12%!). The low cost of debt allows Nestle to make acquisitions that not only strengthen its competitive position but accelerate earnings growth as we saw earlier in the year with the announced $12bn purchase of Pfizer’s baby nutrition business. This is a reminder that there are winners as well as losers in the corporate world from macro-economic turbulence just as there have been in amongst sovereigns. Most other stocks simply do not have these advantages. 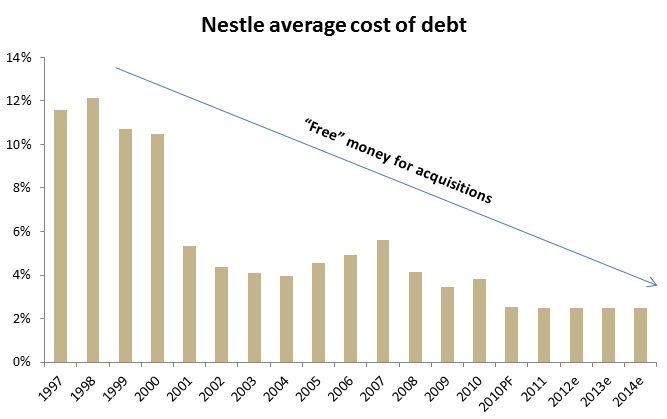 Nestle is clearly an uncommon stock. It also has uncommonly low risk characteritics which are reflected in its current CDS (the bps cost of insuring against debt default) price of just 31. This is the lowest in corporate Europe (only Unilever and a handful of US bluechips have comparable lowly CDS). With the exception of the Kingdom of Norway, Nestle’s CDS is also lower than every sovereign worldwide. In other words, the market currently believes that there is more chance of the Swiss and US governments defaulting on their debt than Nestle. Although CDS is a measure of the risk of a company defaulting on its debt rather than cutting its dividend, it is only when Nestle is compared to assets of similar “safe haven” status that the attractiveness of its equity can be fully understood. 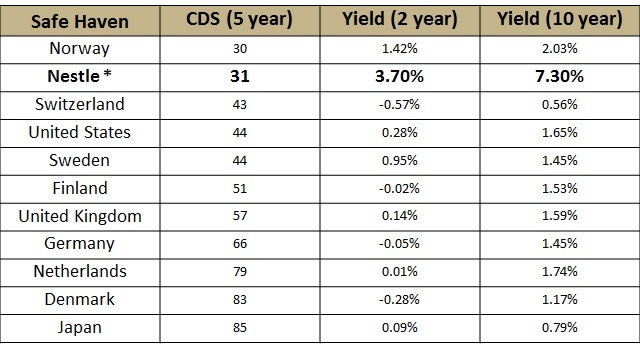 We can see from the table that there is no “value” left in the sovereign bond market amongst the world’s top 10 “safe havens”, with negative yields on 2 year notes in Switzerland, Finland and Germany and record low yields on 10 year notes in every other country. By contrast, if we assume that Nestle can continue to grow its dividend at 12% per annum, it will offer an average dividend yield of 3.7% over the next two years and 7.3% over the next 10 years. At the current share price, Nestle will be yielding 11% by 2022. When valuation upside from sovereign “safe havens” has been exhausted it is logical for investors to look for higher yielding assets with similar low risk qualities. The valuation gap between low risk sovereigns and low risk equity is simply ridiculously wide. If any stock can highlight the continuing relevance of European equities as an asset class it is Nestle – probably the world’s cheapest “safe haven” asset.

‘Is the OMT just the pari-passu SMP?’

‘Can Draghi take the Euro-zone off the modern day gold standard?’