‘Is a new bull market already underway in “growth” stocks?’

We at Argonaut have a basic investment belief that bull markets rarely repeat; that stock market leadership is unlikely to sustain itself in a new capital cycle. This is in part because financial markets will always over-extrapolate trends and therefore over-allocate capital to booming industries, sowing the seeds of an eventual bust. But this is also true of investment styles: not least the perpetual debate between “growth” (which we define as high ROE/high price to book ratios) and “value” stocks (low ROE/low price to book ratios).

As we can see from the chart below (Figure 1) the 1990s saw huge out-performance of “growth” stocks which reached its apogee in the NASDAQ bubble of 1998-2000. This has been followed by an equally impressive out-performance of “value” stocks from 2000-2008. The explanation of the success of this “value” trade lies not only in the nose-bleed valuations of high ROE stocks from the starting point in 2000 but also a reflection that the 2000-2008 period – particularly in hindsight - was one of both robust global economic growth led by emerging market industrialisation and abundant availability of capital. 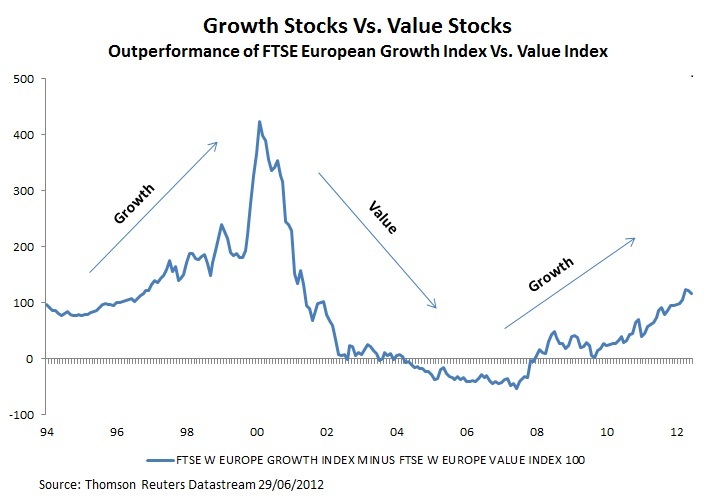 “Value” stocks are intrinsically less good businesses as evidenced by a structurally lower return on share-holders equity (ROE). This can reflect a company unable to maintain profit margins through the absence of a strong competitive advantage but it can also be symptomatic of a company that is overly capital intensive; that can only sustain profitability through significant on-going reinvestment requiring external funding. Between 2000 and 2008, the inherent disadvantages of “value” stocks mattered less. Not only did many “old economy” historically low ROE businesses (e.g. steel, commodities, capital goods) experience super normal profitability but the ready availability of capital allowed many value stocks to artificially inflate their ROE through use of debt-financing relative to equity (e.g. banks). Every stock could benefit from the abundance of economic growth and available capital. Any stock trading at a premium multiple was commonly considered “expensive” and therefore a “bad” investment and any stock at a discount “cheap” and a “good” investment. The idea (which was commonplace in the 1990s) that some (high ROE “growth”) stocks should command a valuation premium because they were inherently better businesses became an anathema.

Debt markets saw a similar trend of reversion to the mean valuation, not least within Europe where country risk premiums collapsed. It is worth remembering that at the beginning of 2008 lower quality sovereigns like Greece, Spain and Italy could borrow 10-year money at just over 4%, whilst higher quality Germany paid 4% and Switzerland 3%. Today Spanish and Italian 10-year money costs over 6%, whilst Germany pays just over 1% and Switzerland 0.5%*. As the chart below (Figure 2) shows, the “Great Recession” of 2008 was a watershed in sovereign debt markets since when risk premiums have ballooned. Indeed yields on shorter term (2 year) sovereign debt have recently turned negative in six European countries (Austria, Denmark, Finland, Germany, Netherlands and Switzerland). Valuation in sovereign debt markets has become irrelevant. 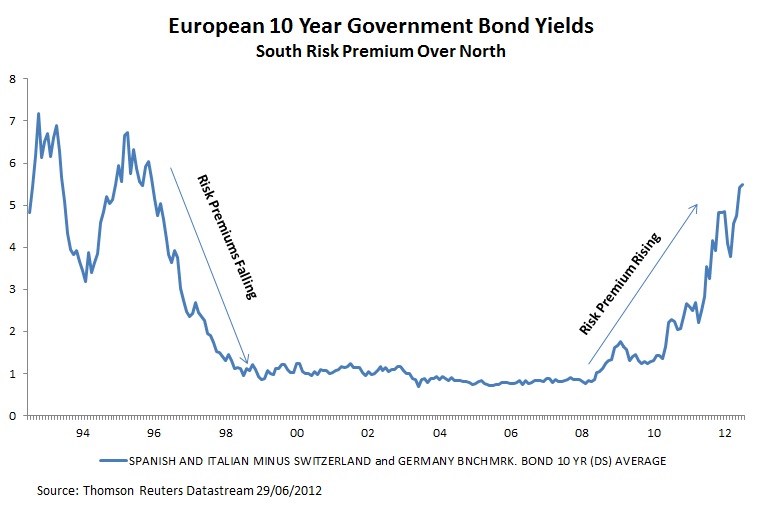 Just as the “Great Recession” of 2008 was a watershed moment in the sovereign debt markets, so it has also been in equity markets since when a new period of out-performance of “growth” stocks has begun (Figure 1). This reflects not only the higher quality earnings of “growth” stocks but also their ability to fund growth, either from cash generation or like Switzerland through preferential borrowing costs. This quiet bull market has often been hidden behind the soap opera of the Euro-zone crisis, a noisy risk-on/risk-off prevailing trading mentality and a counter-narrative of the “cheapness” of Europe’s most bombed out equities. But as the sovereign debt markets have shown, this is a new age of discernment where quality counts for more than value. And as long as “value” doesn’t work in debt markets; why should it in equities?

‘The new “money illusion” and its implications for wealth management’